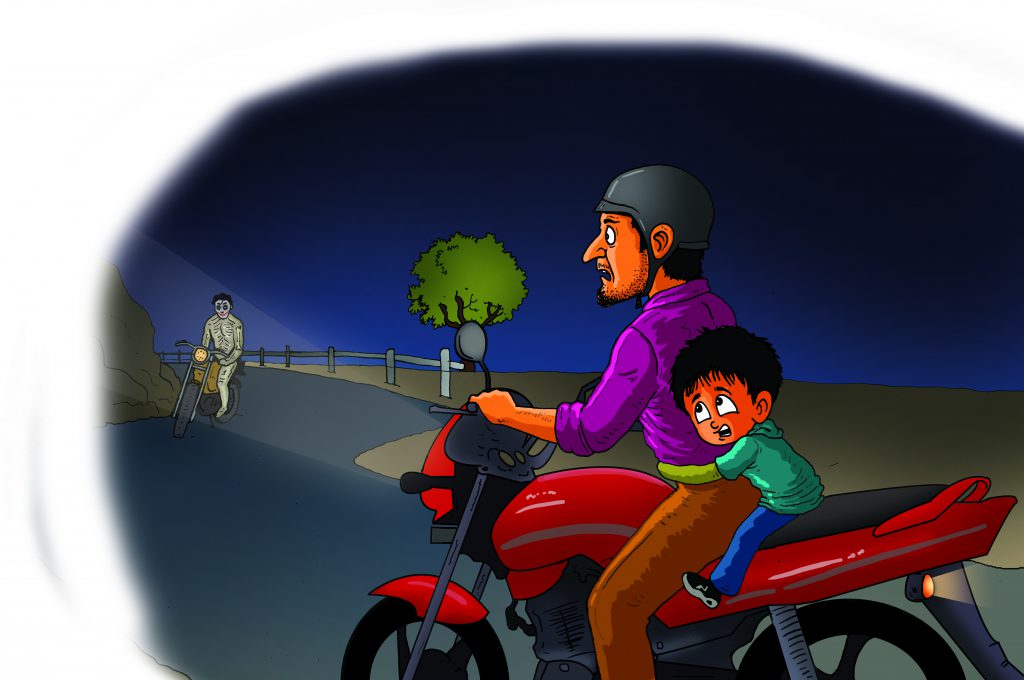 Bablu looked at the dark road ahead and screamed, “Dad! Ghost!”

“Where?” asked his Dad, and stopped his motorcycle. “There” said Bablu pointing to a human skeleton on a motorcycle that stood on the road ahead. Everyone was avoiding him and going the opposite way.

“Is it a ghost or are we simply imagining it?” asked Bablu’s Dad, looking ahead carefully.

“Dad! Let’s also turn and go the other way,” said Bablu feeling terrified. But his Dad kept looking at the skeleton.

He said, “Bablu! I’m not convinced that it is a ghost riding a motorcycle! Let’s go and see the ghost clearly.”

Bablu was feeling petrified but wondered if a ghost could really ride a motorcycle.

His dad started their motorcycle and carefully went close to the skeleton.

The skeleton looked up from trying to start his motorcycle and said casually, “Oh, nothing much! My motorcycle had suddenly stopped.”

“Why don’t you fly and go wherever you’re headed? Ghosts can fly, right?” asked Bablu now when he felt he could talk to a ghost.

“Fly?” now the ghost was shocked. “Why are you joking, son? If I could fly, why would I be riding a motorcycle?” Then he looked at his motorcycle, and said, “It simply wouldn’t start.”

“I see,” said Bablu’s Dad without blinking an eye as if talking to a ghost was usual, and walked to the ghost’s motorcycle. He carefully turned the key, kicked on the pedal, but the motorcycle would not start.

He then asked, “Where are you headed?”
The ghost said, “I’m participating in a play in the neighbouring village. I’m headed there.

Bablu’s Dad looked at the motorcycle and said, “There could be three reasons why the motorcycle is not starting. First, the key is incorrectly inserted, secondly, it has run out of petrol or thirdly it may be dissipating current. I have checked the first two causes,” then he looked at the ghost and asked, “Does it have petrol?”

“Yes, I just filled a litre petrol in it,” said the ghost.

“Why isn’t it starting, then?” asked Dad.

Bablu said, “I think the motorcycle too is scared seeing a ghost and that is why it won’t start!”

“What Ghost?” asked the skeleton, surprised.

“Bablu may have a point!” said Dad. “Look, people are running away after seeing you from afar.”

“But why?” said the ghost confused.

“Look at yourself in the mirror,” said Bablu, turning the rear view towards the man.

When skeleton looked at his reflection in the mirror of the motorcycle, he jumped seeing himself.

“Oh! A ghost!” he cried out and he took two steps backwards.

“What happened?” asked Bablu.
“A ghost!” he said pointing to his reflection and quickly took out water from the backseat and started washing his face. “I look really scary in the dark—like a real ghost! The village did not have a green room, so I got dressed from my home and was going on my motorcycle. But then I did not realise that in the ghost dress, She would look like a real ghost. But how come you weren’t scared?”

“I was scared,” said Bablu’s Dad. “But then I thought that a ghost could not be riding a motorcycle and something else was the matter. So I approached you.”

“Where are you going? Don’t you have a play to act in?” asked Bablu’s Dad.

“No, thank you. I won’t play the role of a ghost who got scared of himself!” he said and headed back home. 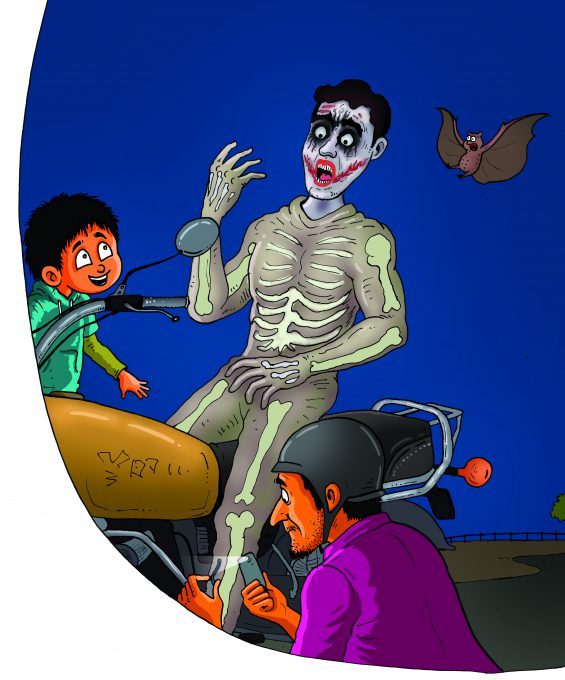 Bablu said, “Dad, we easily get scared seeing a ghost. Some people take advantage of this and scare us more. Had we been scared and gone the other way, I too, would have been forever scared of ghosts.”

“Yes, Bablu! We get scared and fail to see the truth,” said his Dad and together, they headed back home on their motorcycle.

Bablu was mighty pleased with himself. He had actually met a ghost! He wanted to narrate the experience to his Mom.

“Faster, Dad! I must tell Mom about how we met a ghost today!”

The motorcycle zoomed fast ahead.