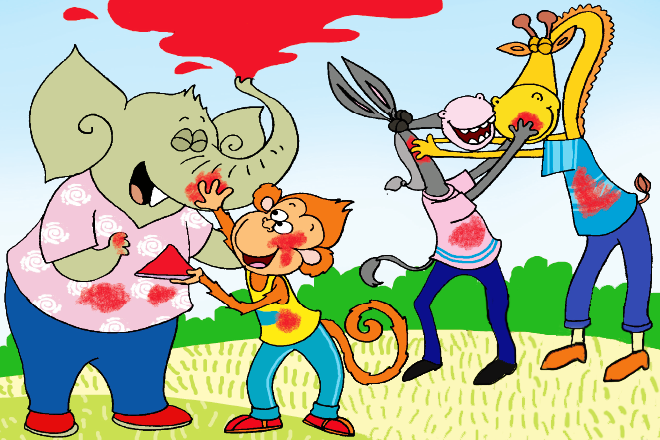 Champakvan looked colourful as it was celebrating the festival of Holi. Dumpy the Donkey, Jumbo the Elephant, Jumpy the Monkey, Vicky the Deer, Blacky the Bear and Freddy the Giraffe were happily playing Holi with each other. They were spraying water using colourful pichkaris and rubbing colours on each other’s face. The entire place looked cheerful.

After a short while, Barney the Hyena, Baddy the Fox and Spotty the Cheetah arrived. This trio was very mischievous.

“Holi celebrations with just the gulaal? This is indeed a very dull festival,” said Barney the Hyena.

“True,” said Baddy the Fox. “This is so boring Holi should be played like this.” he said and caught hold of Vicky the Deer. He stained Vicky’s face with black colour.

Vicky angrily asked, “What have you done, Baddy? What have you applied on my face? I am feeling a burning and itching sensation.” He started scratching his face. Baddy, Barney and Spotty burst out laughing. They said, “Well, this is the real fun. Now all of you get your face painted black. Then let’s go to the main road. There, we’ll stain the faces of every passerby.”

“We shall not do that. You have spoilt our celebrations. We were playing with gulaal. It is an eco-friendly colour. It doesn’t harm anyone. Your kind of Holi is disgusting. What is the point in painting someone’s face black? It makes them look awful. Look how troubled Vicky is. He will have to put in so much effort to get the colour off his face. A lot of water will be wasted,” said Dumpy. “I was always for celebrating Holi without the use of water but friends insisted so I agreed.

Getting this gulaal off our face will not use a large amount of water.”

“Vicky will have a tough time washing the colour off his face. It is not good to use muck, soil, dung, coal tar and other itchy substances to play Holi. We would appreciate it if the three of you went away from here,” added Jumbo. “We wanted to play Holi with you as well. Now, I am not in the mood. It is better that you go away before I lose my temper.”

Barney said, “Jumbo, you seem to be really upset. According to us, this is the actual fun of Holi. If you so wish, we shall go from here.” He added, “Baddy, Spotty, let’s go.”

“Sure,” said Spotty. He splashed some muck onto Freddy’s face before leaving. Dumpy and Jumbo could not tolerate this anymore. They did not let them go. Jumbo caught hold of Spotty. He held him in his trunk and started twirling him around. Dumpy, on the other hand started kicking Barney continuously. Baddy the Fox tried to escape. Freddy the Giraffe caught hold of him. Jumpy the Monkey and Blacky the Bear started hitting Baddy. Vicky also joined the gang. He began poking Baddy with his long, sharp horns.

Some other animals of Champakvan saw this. They thought that the kids were enjoying the festival. They thought that Spotty was enjoying being twirled in Jumbo’s trunk. They were happy for the kids. The animals also saw Dumpy kicking Barney. They assumed that it was a new way of celebrating Holi. After a few minutes, they heard Spotty, Baddy and Barney’s cries for help. That was when they realised that these three were being beaten up by the others. They rushed to help them. They asked the kids as to why they were beating the trio.

Dumpy narrated the entire incident to the other animals. He added, “We are aware that Champakvan is facing an acute shortage of water this year. If we waste water playing Holi, we shall face worse problems in the near future. I tried explaining the same to Barney, Baddy and Spotty. These three didn’t listen. They kept applying muck on our faces. Thus, we had to teach them a lesson.

The oldest Lion of Champakvan, Leonard heard this. He angrily said, “True. They deserve this punishment. These three have cut down many trees in order to light a fire for Holi. They have also destroyed some huts. They are indeed wicked. All of you should hit them a little more.”

“Sorry, Grandpa,” replied Spotty, Baddy and Barney. “Please forgive us. We shall not repeat this mistake.” All three of them kneeled down. They started begging for forgiveness.

“Alright!” Leonard said. “We forgive you. Do not repeat such mischief again. It is a festive occasion. We must celebrate it with love and happiness. We must make friends and not enemies. Now patch up with Jumbo, Dumpy, Vicky, Blacky and Freddy.” Baddy, Spotty and Barney were still nervous about extending a hand of friendship towards the other kids. Dumpy and Jumbo came forward. They gave them a warm hug. Everyone felt happy with this gesture from Dumpy and Jumbo. All the animals then proceeded towards Leonard’s house. They played Holi with each other till the evening. It was a colourful Holi using dry colours; with a feeling of love and brotherhood. It was indeed a memorable Holi celebration at Champakvan.