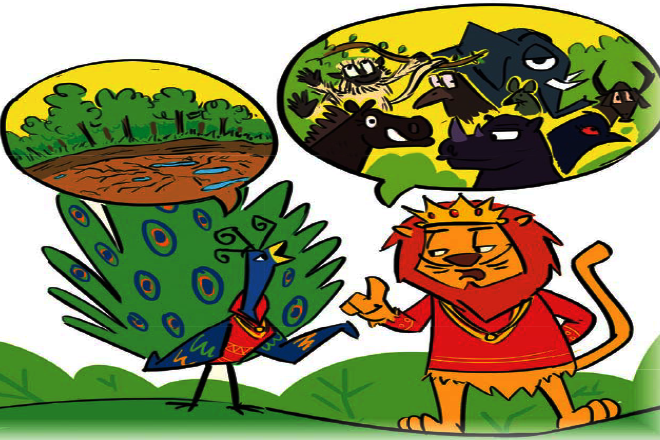 “This year, let’s not involve any of the dark birds or animals in the Holi celebrations. The colour does not show against their dark skin and feathers. It’s just a waste of colour and effort,” said Simha.

“I agree. The price of colour powder has skyrocketed, so buying extra packets just for them will be too expensive,” said Sona deer.

We also won’t be able to make special arrangements for water tankers for them like we do every year, as the nearby ponds have all dried up. Even if we have to buy water, who is going to pay for it?” asked Pihu.

All the animals agreed that banning the dark birds and animals from the Holi celebrations was a right move. Pihu and Simha signed an order to that effect.

Next day, huge banners were put up across Sonavan. They read: “No Holi for dark animals and birds. – By order of the Kings of Sonavan.”

On seeing the banners, the dark animals and birds felt humiliated and angry.

“How can they pass an order concerning us without even consulting us in the first place?” fumed Kalu crow.

“It is a common festival. Everyone has the right to celebrate,” said Bholu elephant. After much discussion, the dark animals and birds decided to organise their own Holi celebrations. They eagerly set out preparing for it.

On the day of Holi, Pihu, Simha and the other animals celebrated with great fervour. They smeared colours on each other, sang songs and danced. Suddenly, the sound of their celebration was drowned by music coming from another part of the forest. They could also see big clouds of colour rising above the treetops.

“Who else is celebrating Holi in our forest? The music is even better than ours!” said Simha.

When Rinku rabbit saw through his binoculars, he was stunned.

They were the dark birds and animals! They were having a spectacular celebration. The bear, the dark horse, the rhino, the wilder beast and the chimpanzee were beating the drums, while the cuckoos sang and the crows danced. The music echoed through the forest.

“Well, who is it?” asked Pihu impatiently.

“Not only have they defied our orders, but they are celebrating Holi grander than us!” thundered Simha.

“With their splashes of colour, they even look more colourful than us,” said Rinku, looking through the binoculars again.

Meanwhile, the group of dark animals and birds had reached them. Bholu stepped forward and sprayed everyone with colour water from his trunk.

“On behalf of the dark birds and animals, I wish you all a happy Holi!” he said.

“How dare you defy my order and celebrate Holi. You will all be punished for this!” roared Simha.

“Please do not mistake us, Sir. We would never defy your orders. You banned us from participating in your celebrations. So, we organised our own Holi celebrations and we would like to invite you all to join us,” Kalu explained politely.

Simha could not refute that point. “Well, they are right,” he thought.

The other animals were ashamed. Instead of looking for a solution, they banned the dark birds and animals from participating.

“Please forgive us,” said Pihu. “We were so blinded by our arrogance that we failed to see the real purpose of a festival—to bring us together.” “Pihu is right. Henceforth, I declare that all festivals should be celebrated together. There will be no discrimination announced Simha, throwing colours on Kalu and Bholu.

Everyone cheered and joined in the celebrations!

“This is the real delight of playing Holi,” said Simha, looking at all the happy faces.