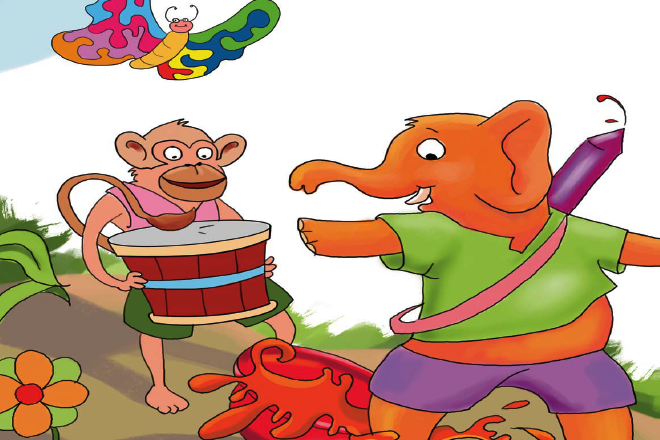 Champakvan was in a festive spirit! It was the colourful festival of Holi. Sweety Nightingale had perched herself on the branch of a tree. She was singing songs and reciting poems about Holi, while Jumpy Monkey was beating a drum with his tail.

Teetu Butterfly was dazzling everyone with her wings. They were even more colourful today for they had been drenched in bright shades of red, yellow, green, blue, pink and other Holi colours.

Cheeku Rabbit came out of his house. He looked around and saw everyone having fun. He then smiled and blew the saxophone that he had with him.

All the animals rushed towards Cheeku Rabbit. Jumbo Elephant, who was in a hurry, put his big leg in a tub and spilled some redcoloured water out. Anty Ant, who was sitting inside the tub, shrieked. “Jumbo! You stupid elephant!” she shouted. “Can’t you see where you’re going?”

Jumpy Monkey somersaulted in his haste to get to Cheeku. He tripped in the bargain and broke his drum. It went right over him and only his naughty little face stuck out.

Harry Frog and Tarry Frog jumped from one tub to the other and made themselves as wet as sponges. And Dumpy Donkey ran so fast, that he accidentally kicked Baddy Wolf with his strong legs. The string of Dumpy Donkey’s pajamas came loose too, and his pajamas almost fell down! All the animals looked so funny by the time they reached Cheeku Rabbit that they all burst out laughing.

“OK! Calm down now and listen to me,” Cheeku Rabbit said with a smile. “I have an announcement to make! We will celebrate Holi with King Sher Singh this year!”

“Celebrate Holi with King Sher Singh?” the animals said, confused. “How can we do that, Cheeku? King Sher Singh doesn’t go out of his palace on Holi day. And he doesn’t allow anyone who has water or colours to go in either.”

“We will surprise King Sher Singh,” Cheeku Rabbit said and grinned. “And when he plays with us, he will have plenty of fun too!”

“It will be like putting a bell around the cat’s neck,” Dumpy Donkey said. “Whoever has the courage to do that?”

“Be quiet, Dumpy!” Jumpy Monkey scolded. We will work together to put the bell around King Sher Singh’s neck. Er…I mean to play Holi with him.”

They then discussed some ideas. Soon, all the animals marched together towards King Sher Singh’s palace. Gajju Elephant was leading the procession. He was carrying a special chair made of balloons. The other animals were carrying colour pistols and were dancing on the way.

Sweety Nightingale was singing a song that she had made up,

It’s a time to be with those who are near and dear! And so Champakvan’s procession is here!”

All the animals stopped when they reached King Sher Singh’s palace.

“We want to meet King Sher Singh,” Cheeku Rabbit told the guard outside the palace door.

“I don’t think I can let you go in,” the guard said, hesitant to let the animals into the palace. Before the guard could say anything else, Teetu Butterfly sprayed some coloured water on him. “Yikes!” the guard shouted and ran inside to inform Sher Singh.

A few minutes later, King Sher Singh stepped out of the palace. “What are you all doing here?” he roared. “You very well know that I don’t play Holi.”

“Er… Your Highness,” Jumpy Monkey said in a respectful voice. “We have just come to convey our good wishes.”

“Thank you,” King Sher Singh said politely. “I wish you all well too but please leave now.”

“Your Highness,” Cheeku Rabbit said suddenly. “Now that you have come out, please sit with us for a while. We will be happy if you talk to us for a few minutes.”

“Alright,” King Sher Singh said. He then began looking for a chair to sit on.

Gajju Elephant immediately offered the chair of balloons that he was carrying.

“Why don’t you sit on our special chair today?” Gajju Elephant said. King Sher Singh looked at the chair. “What a unique chair this is!” he said.

Cheeku Rabbit then went forward and put gulal on King Sher Singh’s cheeks. “Happy Holi, Your Highness!” he said. “From all the animals of Champakvan!” King Sher Singh laughed heartily. “Oh Cheeku!” he said happily. “Your wit has worked again today when I was trying my best to hide indoors!”

King Sher Singh then invited everyone into his palace for a cup of tea and special Holi sweets. All the animals were very happy. Holi was more fun when they celebrated with their dear King Sher Singh.