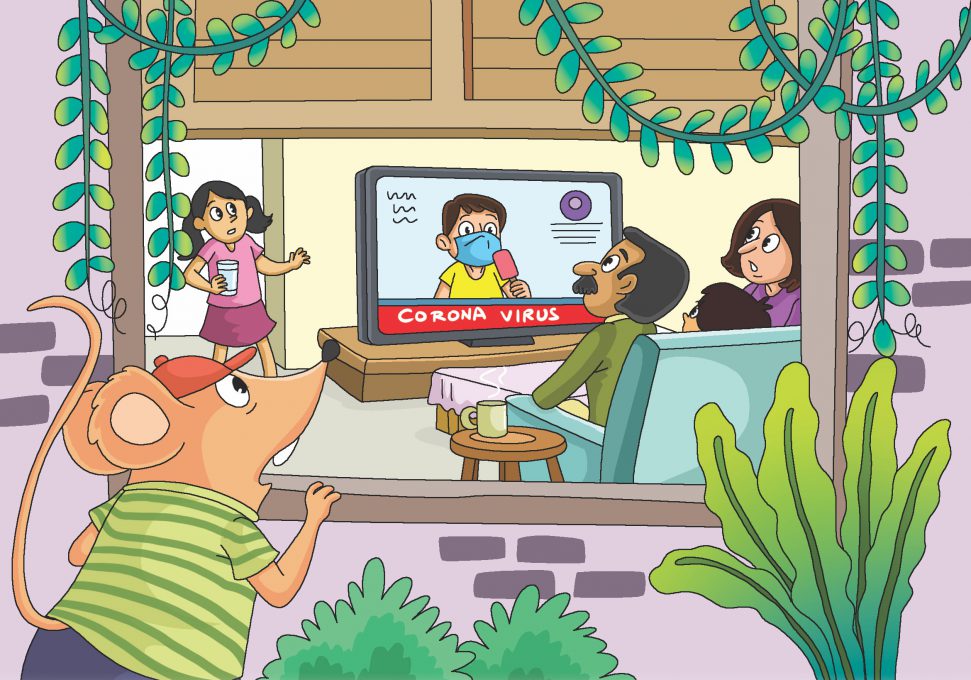 There was silence all around. Streets were deserted and parks, abandoned. No one could be seen on the roads. It seemed like all humans were holed up inside their houses.

The black smoke from the skies had disappeared and the air was less polluted. Rivers, too, were cleaner than before.

The animals of Champakvan couldn’t understand what was going on. They were called for a meeting by Blacky bear in the morning on the banks of Crysty River. 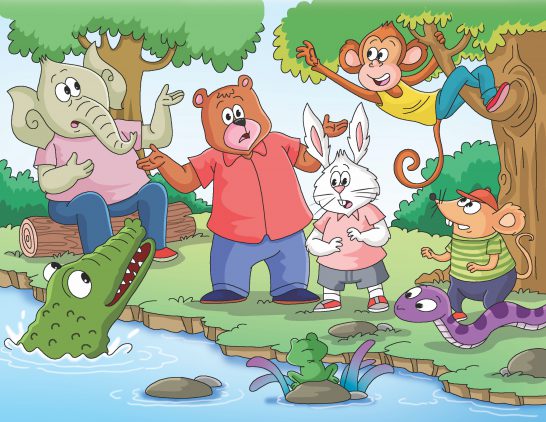 Blacky Bear asked many questions and looked at the other animals for answers.

“I have heard that a disease has taken over the cities, villages and towns. It is forcing the humans to stay in their houses,” said Jumpy monkey who had returned from the city last week.

“What kind of a disease? How can a disease cause the cities to shut down?” asked Jumbo elephant.

“I do not have much information. It is just something that I heard from somewhere,” replied Jumpy.

“Our water is cleaner too. It seems like nobody is working at the factories as the water is not as dirty as it used to be,” said Wooky alligator, popping his head out of the water.

“Yes, Rocky rooster also told me that humans don’t come out of their houses even after the morning rooster call,” said Cheeku rabbit.

After listening to all of them, Blacky took some time to think and then said, “We should try and find out what is happening. I hope this silence is not a warning for some kind of danger approaching our forest. Let’s find out if this is a conspiracy against us. We should send someone from our forest to the city.”

“Meeku mouse can go. He is fast and small and can enter any house,” said Dumpy pig.

“Yes, I agree. Meeku will be good for this job,” added Dodo Peacock.

“Can you do it, Meeku?” asked Blacky. “Sure, I can. It will be my pleasure to be able to do something for our forest,” replied Meeku and left for the city immediately.

On reaching the city in the afternoon, he noticed that many shops were shut and very few people were on the roads wearing masks. He went inside one of the houses and saw a family watching television. 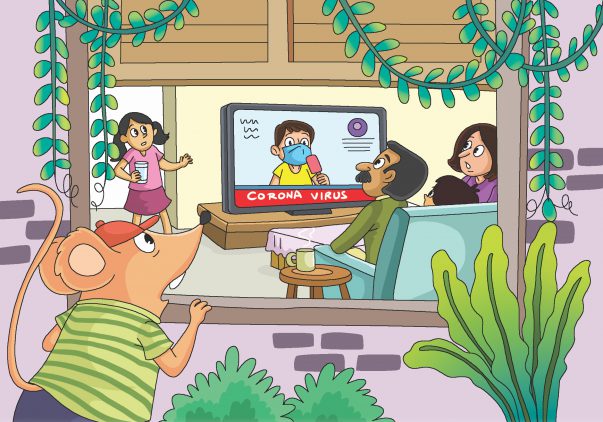 A news programme was announcing the rising number of cases and listing the precautions people should take. Meeku left from there and entered another house.

Here, the television was on but no one was watching. He heard the news host saying, “Coronavirus is spreading fast. Those who have symptoms like runny nose, cough or fever should report immediately. An infected person needs to maintain distance from others. People should stay at home and only step out to buy essentials.”

Meeku went into yet another house where he saw a little kid drawing and talking to his grandfather.

“Wow! Karan, this is lovely. You have shown how all the animals are roaming freely and humans are sitting at home,” said grandpa. 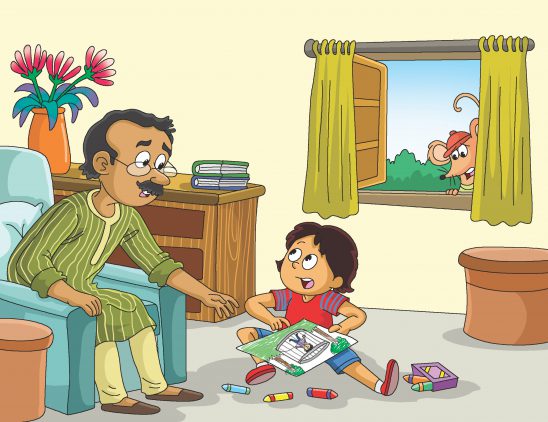 “It’s true, grandpa. Now, humans are locked in cages while the animals are merrily roaming outside. They are free and not afraid of any virus. When will this coronavirus leave us, grandpa?” asked Karan.

“My dear Karan, until we find a vaccine that can save our lives, we have to follow certain rules of maintaining social distance, washing our hands regularly and eating healthy food. We cannot stop the virus but we can stop it from spreading and hope that this pandemic gets over soon,” explained grandpa.

“Why is it called a pandemic, grandpa?” asked Karan.

“Because it is a disease that has spread to all the countries in the world,” replied grandpa.

Meeku understood the situation. He left the house and ran towards the forest. Another meeting was called in the forest where Meeku explained the whole situation to everybody in detail.

He told them, “Champakvan is not under any threat. It is the humans who are facing a threat from a disease called coronavirus. Let us hope they learn something from this situation.”

This eased the unknown fear that the animals of the forest felt. They hoped that the helplessness the humans faced goes away for good.

3 thoughts on “Humans In A Cage”

These stories are very much nice and useful for kids like me.

Rhis magazine is amezing and its language is also good for easily understand.