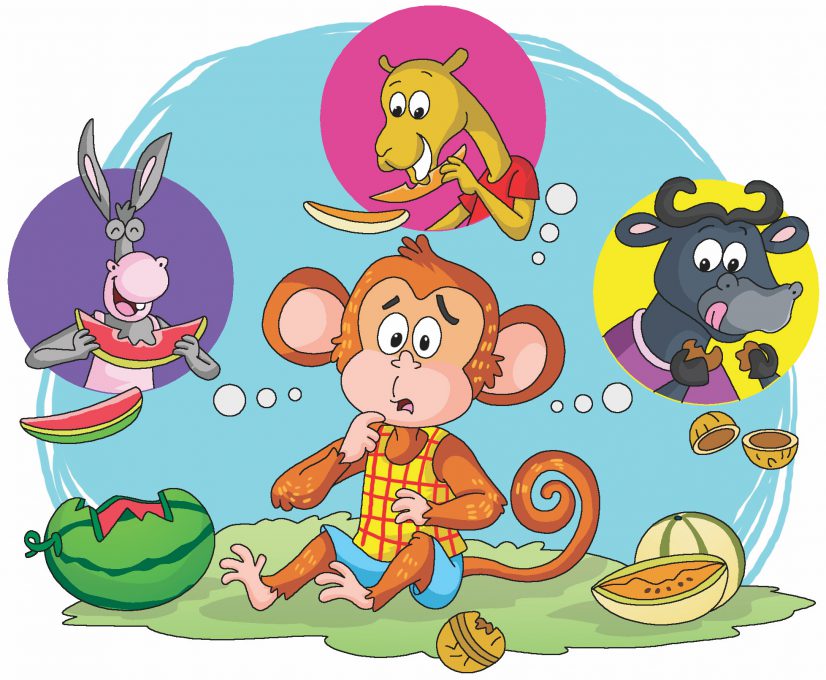 One day in Champakvan, a little monkey was found all by himself. No one in the forest knew whose child he was. Jumbo elephant asked the monkey his name and the little monkey sobbed and said his name was Jojo, and he was lost.

Jojo had come to Champakvan from another forest. Torti tortoise, who was the eldest member of the forest, asked, “Son, what is the name of your forest?”

But Jojo didn’t know the name. He said that his mother’s name was Timmy and his father’s name was Romi. However, the names of his parents were not enough to search for them.

Everyone in Champakvan welcomed him in and asked the police to find out about Jojo’s parents from the neighbouring forests. And Jojo started living in Champakvan.

Animals of Champakvan were kind and shared food with Jojo. Children of Champakvan played with Jojo, but Jojo wasn’t happy living there and playing with other kids and eating food with them. He missed his parents and forest and wanted to go back as soon as possible.

The other monkeys who lived in the forest had gone on vacations to visit their cousins and relatives living in other forests. Jojo did not even have their company. The other animals tried their best to take care of him.

One day, Jojo decided from that day, he would search and find his own food.  Since it was summer, watermelons were ripe and growing everywhere. Jojo found a spot where there were many watermelons growing on creepers. He had heard that watermelon was a juicy fruit that fulfilled both hunger and thirst. 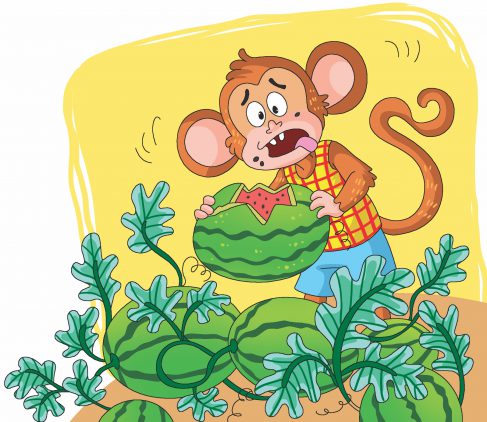 From the creeper, Jojo picked up a watermelon and bit on its hard peel. The moment he bit it, Jojo felt a bitter taste inside his mouth.

Damru donkey who was standing near explained, “Son, this is not the correct way to eat a watermelon.”

“Please don’t try to explain to me. But since you have already interrupted my meal, tell me what you wish to tell me,” said Jojo rudely.

Being older, Damru overlooked Jojo’s behaviour and explained, “For us to relish the taste of this fruit, we need to remove its peel and eat the pulp inside it.”

“Oh, so this is how it should be eaten!” said Jojo. “I have understood how to eat a fruit,” He left from there and jumped to another creeper; a creeper of muskmelons.

“Now I shall enjoy these!” said Jojo with his mouth watering.

He picked up a muskmelon from the creeper and as he had learned from Damru, he popped the melon, split open its peel and started eating the pulp inside it. But the next moment, he spat the pulp from his mouth. The pulp was a tasteless, stringy substance with lots of seeds. This time too, he couldn’t enjoy the fruit.

With a frown on his face, Jojo muttered to himself. Camu camel was walking by and seeing Jojo spitting the fruit, Camu understood his confusion. He said, “Son, you need to eat the hull of the fruit, not its pulp.”

Jojo now thought that Damru had not explained the right way to eat a fruit. So, he decided to follow Camu’s advice.

Jumping all over the place, Jojo climbed a walnut tree. Excitedly, he plucked a walnut from the tree and popped open its shell. But the moment he ate the inside of the shell, he felt a bitter taste and his teeth ached.

He ran towards the river to rinse his mouth with water. Standing nearby, Bullo buffalo was drinking water from the river. She asked, “What happened Jojo? Why are you gulping water?”

“Aunt Bullo, I followed the advice of Camu and tried to eat the shell of a walnut. After eating it, I’m feeling uneasy and my teeth are aching.”

“Oh ho, Jojo! We need to eat the inner portion of a fruit and not its outer part,” she said. Jojo nodded. “Okay, I shall follow this now.” 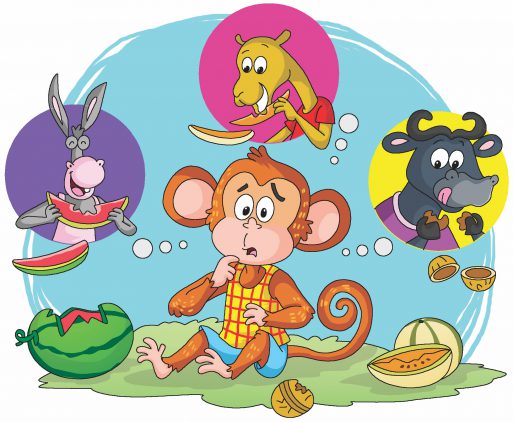 This time, he hopped onto a pear tree. As adviced by Bullo, Jojo ate the inner portion of the pear fruit. But it was full of seeds and this time too, his mouth felt nothing, but a bitter taste.

Walking always with his belly aching with hunger and head full of anger, he felt like crying. Roaming hungry under the bright sun all day long had left him exhausted.

Jojo could not understand what had gone wrong and started crying loudly. Hearing him cry, many animals of Champakvan gathered around him.

Jacky giraffe patted him tenderly and asked, “What happened, Jojo? Why are you crying?” Jojo narrated the entire incident in tears. Listening to his story, the animals couldn’t resist laughing.

“Jojo, not all things come with one exact formula. Every fruit has to be eaten in a unique way. However, don’t you worry! You can stay with us for some days and learn about these things For now, eat
these sweet bananas.”

Then, Cheeku peeled two bananas and gave them to Jojo. With his stomach growling from hunger, Jojo quickly ate the bananas. But even now, he couldn’t understand what went wrong and what was one exact formula. But for now, he just wanted to eat bananas! 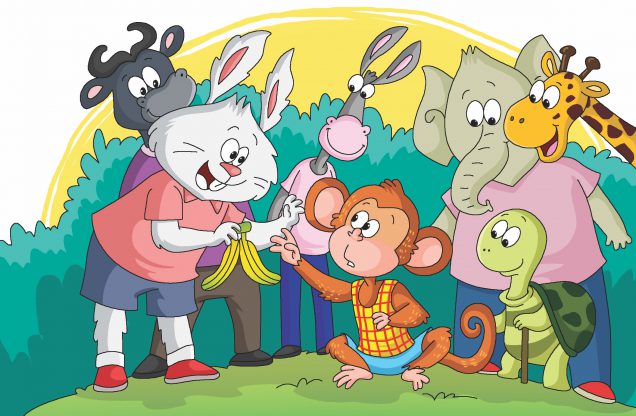