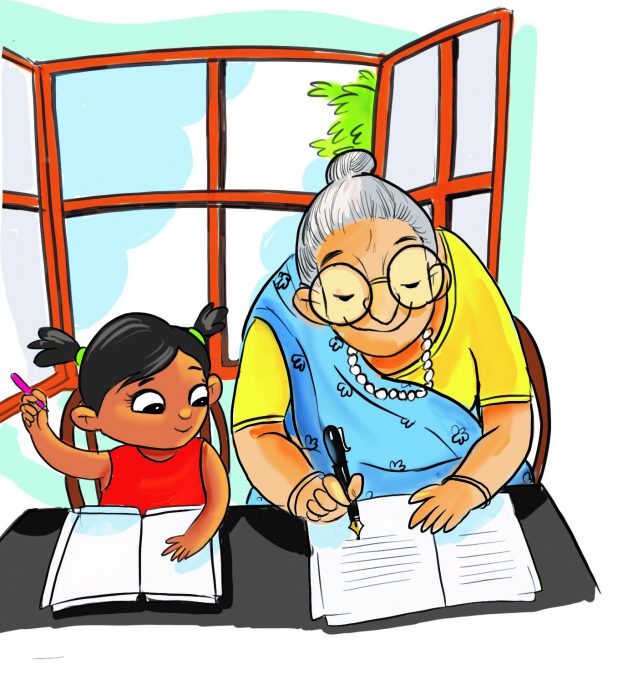 Priyanshi was helping her Grandmother in cleaning the house.

They had started early in the morning and by late afternoon, everything was dusted and old newspapers were collected and neatly stacked. 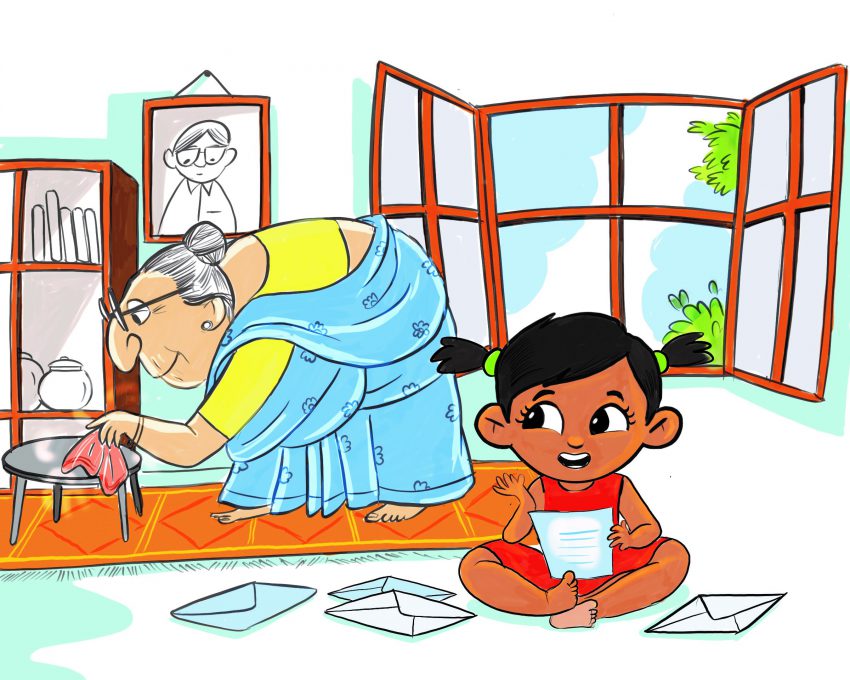 While dusting Grandma’s diary, Priyanshi found a few old envelopes. She tried reading what was written on them, but the writing had faded over the years.

“What are you reading, Priyanshi?” asked Grandma seeing the envelopes in her hand.

“Look, Grandma, what I found! These were in your old diary. Something is written on them, but the writing is not clear enough to read. What are these, Grandma?” Priyanshi asked showing Grandma the envelopes.

“Oh, so you are reading my letters?” asked Grandma.

“Letters? What are they, Grandma?” Priyanshi said, surprised.

“These are my letters that my friend Indu wrote to me. They are from days before mobile phones, SMS’s, WhatsApp and Facebook came into this world. We really enjoyed writing, sending and receiving letters! We used to wait eagerly for letters. What days those were!” said Grandma remembering the old days.

“So Grandma, you used letters to communicate?” asked Priyanshi.

“Yes, dear. In those days, letters were the only means to communicate. The envelopes that you have in your hand are called ‘inland letters’. Letters were written on them. When Indu and I got married, we moved to different cities. We could talk over phone, but it was very expensive. Letters were the only way to communicate with each other. Our letters were full of love, details about our daily lives, and our emotions and feelings. Tears flowed from our eyes when we read letters,” Grandma said, wiping her moist eyes. 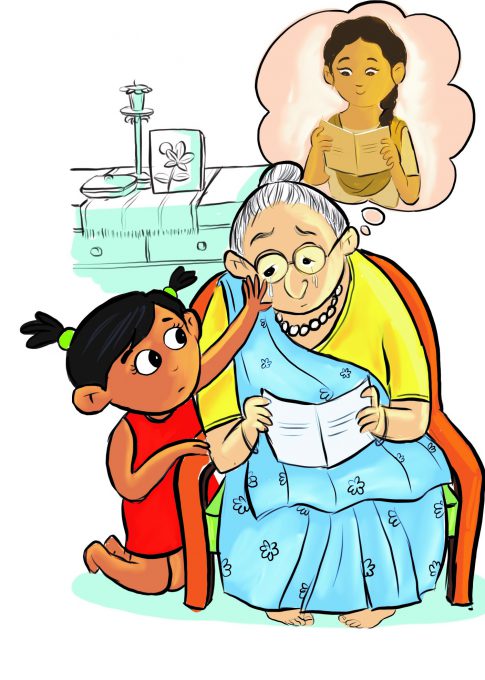 “Grandma, I don’t like to see you cry,” said Priyanshi wiping her tears.

“I am not really crying. My eyes have become watery remembering those old days. You children are lucky that you can easily talk on social media and emails, and also through phone calls,” said Grandma.

“Yes, that’s right, Grandma. But is it wrong to communicate through them?” asked Priyanshi.

“No. there is nothing wrong. But one should not be glued to them the whole day. During our time, we had to wait for weeks to get a letter and the joy of waiting was something else. Now people cannot wait even a minute. That waiting taught us patience,” explained Grandma.

“Yes, that is true. Even before Papa reaches office Mummy phones him four times to ask if he has reached or not,” Priyanshi said smiling.

“Ho-ho-ho! In our time, sometimes letters reached us after months. Once, your Grandpa was posted in Kashmir and I received his letter after six months. By that time he had already come home,” Grandma said laughing. 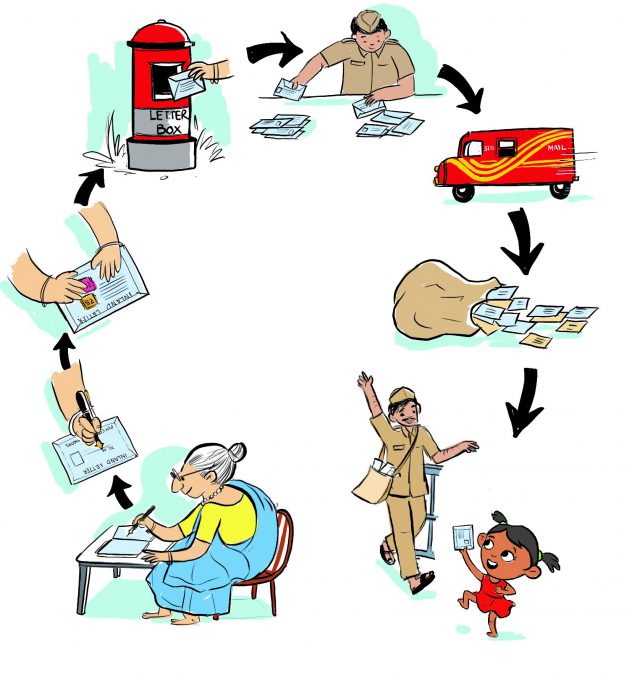 “Then the days of letters were very slow. Modern days are fast. Things happen now instantly. These days are the best and today’s means of communication are better,” said Priyanshi.

“My dear, every era is better than its previous times. In ancient times letters were sent through pigeons. In our times the postman brought the letters. Our hearts danced with joy when we saw the postman at the door.”

“Grandma, tell me one thing. How do the letters reach their correct destination?” asked Priyanshi.

“Through the magic of the PIN code,” Grandma said.

“What is that, Grandma?” asked Priyanshi.

“My dear, PIN code stands for Postal Index Number. In India, it is a special number of six digits. For instance, the Pincode of our Bhiwani Post Office is 262572. Its first digit 2 indicates Northern Region and 26 indicate our state Haryana, the third digit 2 is for our city and the rest three digits denote our post office. So, the letters easily reach the designated post offices,” Grandma explained.

“I didn’t know that, Grandma. So all post offices have a unique 3 digit number,” said Priyanshi.

“Like instant messaging is magic for us,” Grandma laughed and said.

“Grandma, will you teach me how to write letters?” said Priyanshi.

“Yes, sure. But on one condition,” said Grandma.

“The condition being when you go back home, you will write letters to me,” said Grandma.

“Of course, Grandma. That is why I want to learn to write letters. But you will send me the first letter.”

“Alright dear! Firstly, letters should be written in a legible writing so that the receiver can read them easily. The language should be simple. We may express our feelings in detail in letters. They help us stay connected emotionally. I’ll write a letter and show you, how to do it,” said Grandma.

After a few days, Priyanshi returned home. One day while she was sitting in the balcony, the doorbell rang. Priyanshi opened the door and saw a postman standing outside. He handed her a letter that had her name written on it. She jumped with joy at seeing the letter. 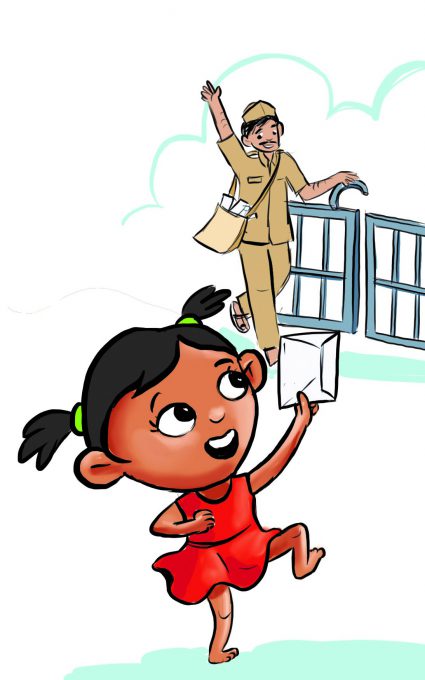 After reading the letter, she wrote back to Grandma and ever since they continued exchanging letters.