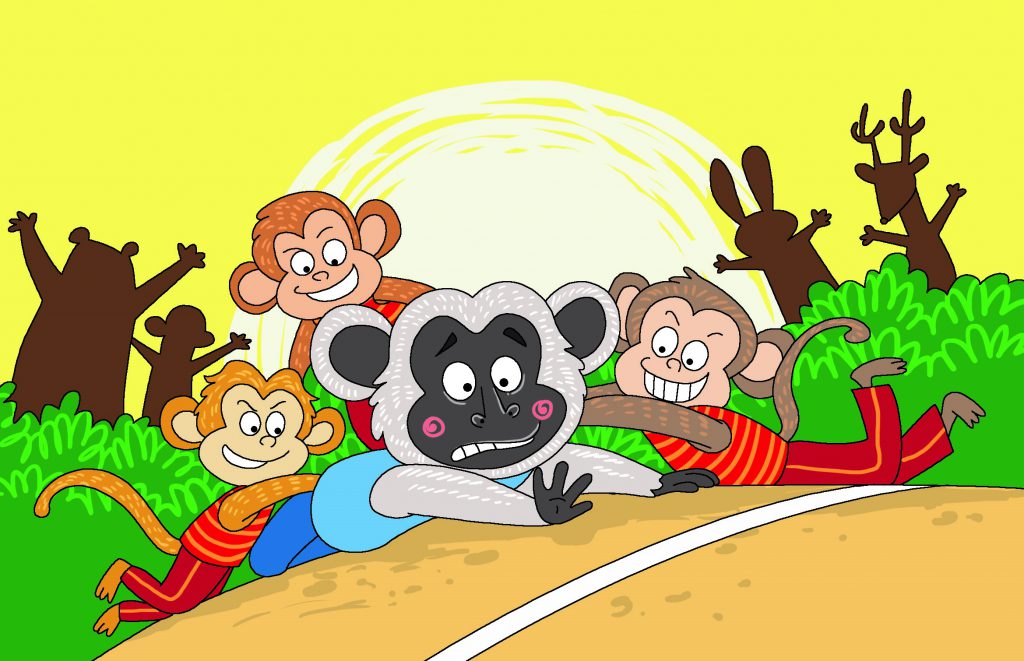 Every year kabaddi matches were played between Ashokvan and Nandanvan. And like every year Ashokvan defeated their rivals because of their captain, Lara langur and his team.

Everyone was congratulating Lara and presenting him with gifts and flowers. Pistu monkey gave Lara a bouquet of beautiful white roses.

“What an excellent captain you are, sir! I have never seen such a set of skills. May I take a selfie with you?” asked Pistu as he gave the flowers to Lara. 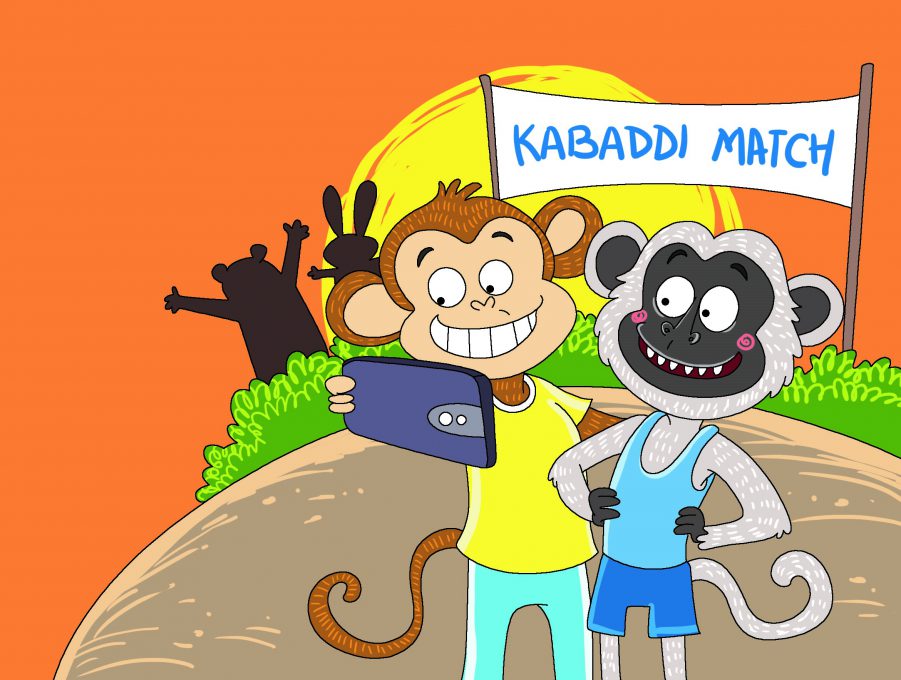 “Yes, yes, Why not! But I did not recognize you,” said Lara.

“I am Pistu and a big fan of yours. I have come all the way from Paragvan to see your game. You are very agile and nimble-footed and you have magical control on your breath. You managed to out, all the players from the other team,” Pistu said praising Lara.

“All this is possible because of yoga and control of breath,” Lara said shyly. After taking the selfie, Pistu took Lara’s phone number and went away.

Next year, once again, it was time for the kabaddi match. Lara called his team and started the training. This time, there were two new players in his team of seven players.

He was explaining the rules to the new members. “The kabaddi court’s length is 13 meters and breadth 10 meters. The match is divided into two halves of 20 minutes each. After the first half, the teams change their sides. In this game, control of your breath and agility, are very important. You have to go into the other team’s side and try to make as many players ‘out’ as you can, without losing your breath” etc.

Just then, Pistu arrived there. “Hello sir, how come you have started preparing so early?” he asked.

“We have to start early if we want to win. How come you are in Ashokvan and how come you remembered me?” asked Lara.

“My friend, I never forgot you. You have been on my mind every day. I have come to take you to Paragvan. I want to invite you for my birthday which is just after two days.”

“Forgive me, my friend, it won’t be possible for me to go anywhere now. I have to train my team,” said Lara.

“What kind of friend are you? You call me your friend and at the same time, you break my heart as well! I have come from so far to personally invite you to my birthday party and you refuse to come. It is a question of only two days. After that, you can do as much practice as you wish.” Pistu forced so much, that Lara went to Paragvan with him. 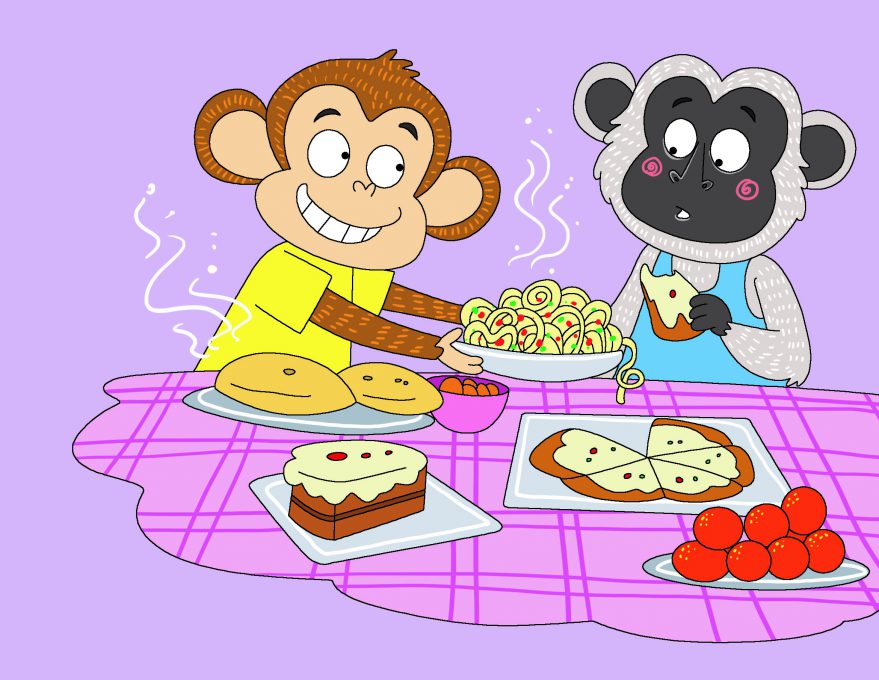 Lara helped Pistu prepare for the party and in the meantime, ate well. He ate delicious cakes, sweets and delicacies. He knew this kind of food was not good for him, but Pistu pressed him so much, that he could not refuse.

On the fourth day, Pistu planned a picnic. Lara didn’t want to go, but Pistu again forced him. Pistu’s homemade food was delicious. Lara enjoyed it and even went for a second helping.

Lara was tired when he came back from the picnic. But Pistu kept talking to him till the night had settled in.

Next morning, Lara got up late. He was tired and so, he could not return to Ashokvan. In the evening, Pistu’s aunt came to meet them and invited them to her house to eat chhole-bhature.

“No Pistu, I am a sports player. I have to eat healthy food to be fit and active. I have already eaten too much,” saying this, Lara declined the invitation.
“But there is no harm in homemade food. My aunt makes the best chhole-bhature in the whole world,” said Pistu. And Lara postponed his departure because they were going to Pistu’s aunt’s house. The bhaturas were really very tasty and Lara ate a lot that day too.

The next day when Lara was returning to Ashokvan, Pistu again told him, “There is a very beautiful waterfall just a little distance from here. I’ve been wanting to go and visit the place. But, it is no fun going alone. Now that you are here why don’t we go together?” 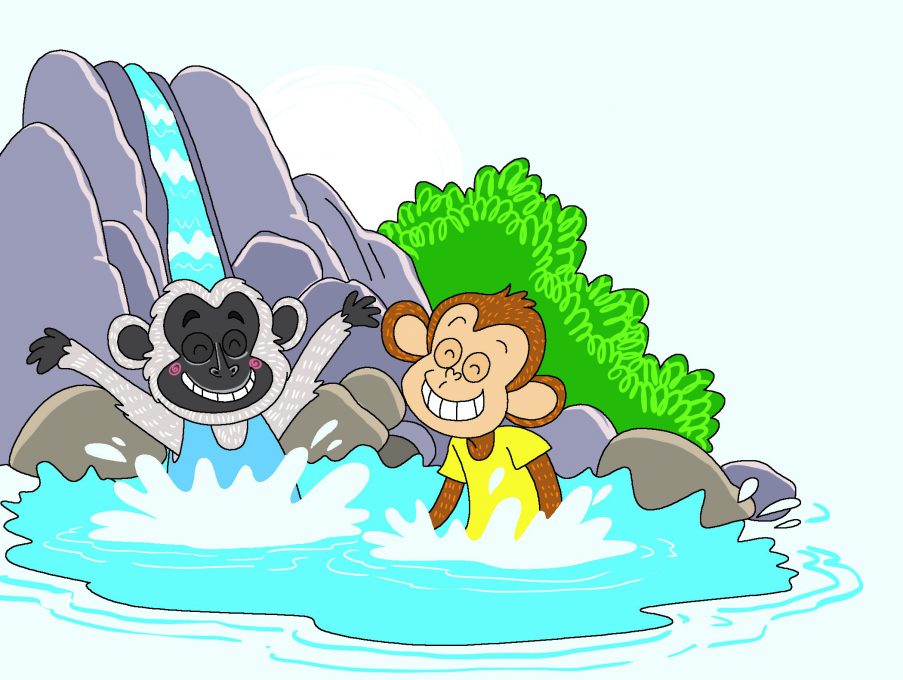 “No, friend. You know that the kabaddi match will be held soon. I haven’t done any practice and I haven’t even trained my team. Two of the players from my team are new and they need to be given extra coaching. I should leave now,” said Lara.

“Why do you need any practice? No one can defeat you. You just need to take a deep breath and go to the other side, and defeat everyone,” said Pistu.

Lara was filled with Pistu’s praises. He had never eaten such tasty food which Pistu was feeding him and he was enjoying every bit of his stay there. So, he agreed to remain there for a few more days.

After visiting the waterfall and the springs, Pistu took him to eat pizza and noodles. While they were eating noodles Pistu asked Lara, “My friend, have you ever seen a 3-D movie?”

“No. I have heard that we have to see it wearing special glasses. But I have never seen one,” Lara replied.

“It is very lively, interesting and enjoyable. It almost feels like the actors have come out of the screen and are right on us. There is a cartoon film being screened now. We can go and watch it tomorrow,” said Pistu.

Lara could not resist the temptation of watching a 3-D cartoon film. During the film, Pistu offered him samosas and cold drinks.

This way, by eating and drinking, visiting places and enjoying life, Lara spent a many days in Paragvana.

When Lara returned to Ashokvan, there was rarely any time left for the match. Before leaving, he thanked Pistu for such an enjoyable stay and his excellent hospitality. He invited him to visit Ashokvan.

“Yes, surely. But first, I will come to Nandanvan to see your match. And then we will go to Ashokvan together to celebrate your victory,” Pistu promised.

On the day of the match, Lara’s team did not play well due to lack of practice. Lara was quite confident that like always he will defeat all of the others. But because he had been eating a lot of food and due to lack of exercise, he had gained weight. He was unable to run fast and soon became breathless.

With great effort he managed to tap every opponent player. But when he was returning to his side, they caught hold of him and pinned him down. He lost his breath and his team lost the match.

Lara felt terrible on losing the match. Then, he was just amazed to see the captain of the Nandanvan team, Mastu monkey, hug Pistu and look very happy.

“What are you looking at us for? Mastu is my brother. It was because he had asked me that I took such good care of you,” Pistu said smiling.

“So, all this was your trick to make me gain weight and miss my practice sessions. You cheated me,” Lara said sorrowfully.

In reply Pistu just showed him his teeth.

“Actually, it’s my mistake. I believed in your false praises and got tempted by the tasty food. Not only me, but the whole team has to pay a price for it,” Lara said loudly.

Lara decided that in the future he would not be swayed by others’ words and started practising from the very next day itself.