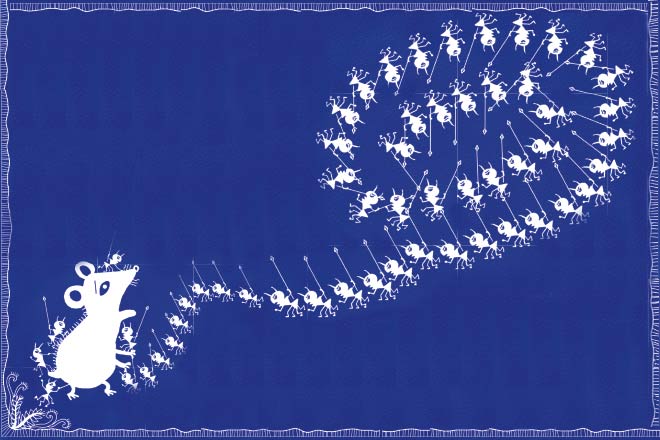 Chinni was a hardworking ant. She used to work all day to look after her family.

One day, Chinni was carrying a grain of rice on her back. On her way home, she met Ricky the Mole. Ricky was a lazy mole. He never went to work. He believed in snatching food from smaller animals to satisfy his hunger.

Ricky saw Chinni and said, “Chinni, why have you lifted such a heavy grain? Do you want to get crushed under it?”

Ricky’s words annoyed Chinni. She said, “It would be better if you keep quiet. You may have no work, but I do. So please let me continue with my work.” Ricky mockingly replied, “I am not stopping you from hard work. It is because of you that idle people like me get to eat two meals a day. If you don’t work hard, how will we get food?”

Then, he snatched the grain from Chinni. Before Chinni could say anything, Ricky ate it. He said, “Go, little Ant, go. Fetch another grain for your young ones, or else they shall starve. You are indeed a dedicated and hardworking ant.”

Chinni was very angry with Ricky. She was helpless. Ricky was stronger than her. She knew that she could not fight him alone. She searched high and low. She found another grain to feed her young ones.

Although Chinni couldn’t fight Ricky, she decided to teach him a lesson. The next evening, Chinni’s neighbour, Mini came home weeping. Chinni asked her what had happened.

Mini said, “I was carrying  a lump of jaggery on my back. On my way home, Ricky snatched the jaggery and ate it. Now it’s too late to go back and search for more food. My children will have to sleep without their dinner.”

Chinni felt sorry for Mini. She said, “Don’t worry. You and your kids can dine at my house tonight. After all, I am your neighbour. It is my duty to help you. Together, we will teach Ricky a lesson.”

Chinni extended a warm welcome to Mini and her kids. She served them a delicious dinner and took care that everyone ate well.

Day by day, Ricky continued to give the ants a hard time. He had now started coming near the anthill for food. He stood there and kept a watch over the ants. He snatched all the food that they brought home. He devoured jaggery, rice, sugar lumps, etc from the anthill.

However, the ants couldn’t do anything. Chinni took all of them to Queen Madhulika. The Queen heard their problems. She understood that the ants wanted to get rid of Ricky. She said, “However mighty our enemy may be, we can defeat him only if we fight together. All of you will have to help the royal army to face the mole and defeat him. Are you ready to help?”

Chinni said, “Your Highness, we understand that we will have to unite together and face our enemy. We will die of hunger if we do not destroy him. Our unity will become our biggest strength. We are prepared to fight until death!”

The Queen was inspired and impressed by Chinni’s brave attitude. She said, “You are indeed brave, Chinni. I promise all of you that if any ant dies during the battle, the royal kingdom will take care of her kids. I will personally see to it that they get proper food, shelter and education.”

The ants started preparing themselves for the battle.

The very next day, the ants got ready to attack. As soon as they saw Ricky coming near their anthill, they marched towards him with swords and spears. Ricky was astonished to see thousands of ants approaching him with tiny swords and spears.

The moment the ants tried to attack Ricky; he hit them with his claws. He flung a part of the royal army in the air. Meanwhile, some of the soldier ants tightly gripped his claw. They started biting him fiercely.

Some ants attacked his tail; others attacked his face whereas a few of them targeted his body. Ricky’s body was badly injured with bruises and cuts.

Ricky tried to free himself. He failed. He realised that it was difficult to fight the huge number of ants. As the number of ants kept increasing, he decided to run away. He felt helpless and weak in front of the huge army of ants. Ricky ran away from the anthill. A few ants held on to his body. They kept biting him continuously. They did not spare even an inch of his body. Ricky could not bear the pain anymore. He jumped into a puddle of water and he then rolled over the sand to get rid of the ants.

However, the ants were determined not to leave his body.

Ricky felt a lot of pain due to the bites. He sat on a stone and started picking each ant out of his body. His body was swollen due to the ant-bites.

Ricky somehow managed to survive. He was grateful to be alive. He felt the collective power of the ants. He realised that their unity had become their strength.

He never came to the anthill again. He decided that he would never trouble any ant in future.