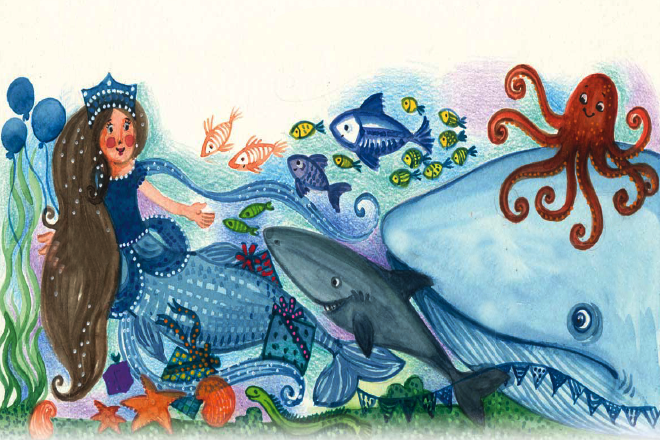 It was a big day in the Arabian Sea. All the fishes were travelling towards the Sea Palace. It was the birthday of their princess, Julia, the mermaid.

Mermaids look different from ordinary fishes. A mermaid’s upper body is human and her lower half is a fish.

A grand birthday party was organised at the palace for which all the fishes were invited. Among the invitees at Princess Julia’s birthday party were the whales, sharks, lionfishes, jellyfishes, octopuses and the three-legged fish.

They all made their way to the palace carrying gifts.

The guests were enjoying the delicious food and the pastry.

A stage had been set up where several young fishes were performing a variety of dances including step-dance, hip-hop, salsa.

Another big stage was set up at the centre of the palace. It was beautifully decorated with glittering garlands, balloons, flowers and glowing stars.

On the stage was a large seven-tiered chocolate cake.

Princess Julia, wearing a beautiful blue gown and a diamond crown, arrived on the stage along with her friends. The guests welcomed her with a loud applause.

As Julia cut the cake, the guests sang, “Happy birthday to you, Julia!” Princess Julia was overjoyed.

Everyone was having fun at the party when suddenly, a dolphin whistled loudly. The other dolphins too followed suit. Dolphins can make different kinds of sounds to convey different messages. The other guest at the party knew the sound that the dolphins were making now meant there was danger nearby. When the guests asked them, one of the dolphins said, “A big fishing vessel is on the way to catch us!”

All the fishes panicked. They started running helter-skelter but a blue whale stopped them.

“Do not panic! The humans don’t know that if I get angry, I can topple the whole ship!” said the blue whale. “I am after all the largest animal known to have ever existed—I am four times larger than a large dinosaur and weigh several tonnes more. Please carry on with the party while I go and teach those fishermen a lesson.”

“Please do not harm them. Just scare them away,” said Princess Julia.

The blue whale left the party accompanied by a large shark. When the two returned after a while, everyone eagerly gathered around them to find out what had actully happened.

When the blue whale and the shark opened their jaws, four fishermen with diving gear and spears came out of them. They looked terrified.

All the guests were shocked!

“Princess Julia, we should thank the dolphins for warning us in advance otherwise all of us would have been trapped in their net. These humans had come prepared to catch even the largest of fishes. They had large nets and spears with them,” said the blue whale.

“We must punish them severely for this, Princess Julia,” said the shark.

“Yes, we must punish them!” the other fishes agreed.

The fishermen trembled at the sight of all the angry fishes. They turned to Princess Julia and begged for forgiveness.

“We will never come here again. Please don’t punish us,” the fishermen pleaded. “Today is a day of happiness. Let’s not punish these men. Let’s forgive them and include them in our celebrations so that they too can share our happiness,” said Princess Julia.

All the fishes were pleased with the princess’s decision.

“That’s how a princess ought to be!” they applauded her.