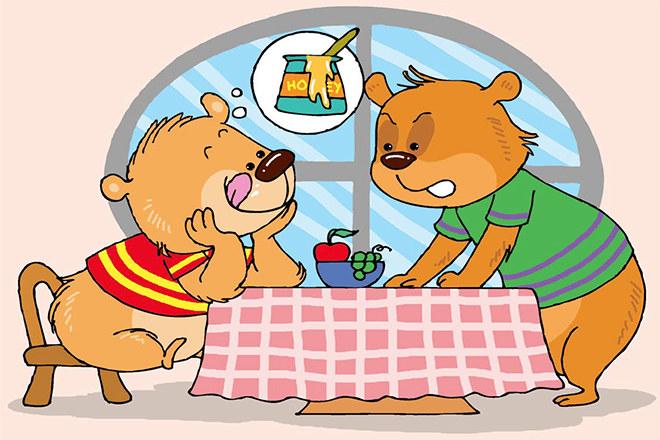 For what could have been the thousandth time, Bob, the bear said to his little brother Teddy, “Stop eating so much honey! How will you climb trees to pick honeycombs if your tummy gets in the way?”

Teddy would not listen and all of his brother’s words would go in vain. His favorite word was ‘honey’ and if he ever ran, it was always towards a jar of it.

At parties, their mother would always say, “Teddy, I want you to control yourself. Leave some food for the other guests,” But Teddy couldn’t help himself.

Teddy’s fondness for food made him an easy target for all kids at school. They decided to play an April Fools prank on him. Harry, the fox, Jolly, the jackal and Bruno, the bull stopped Teddy after school.

“Hey Teddy, we heard that you love honey. This morning, we walked by a tree with a huge honeycomb on it,” said Harry. “We are going to take it down and have some honey. Care to join us?”

“No, let it be,” said Teddy. “Maybe I’ll join you some other time.” Teddy was more worried about what his brother Bob would say had he decided to go with them.

Their April fool’s day prank was in action! The previous day, Bruno, Harry and Jolly had found a particularly thorny babool tree and hung pieces of gunny bags on a branch with long poles. From far away, it looked just like a huge honeycomb.

When they reached the tree, Teddy was ready to show them that he could climb any tree. He ran full speed towards the tree and began to climb it. The thorns of the babool tree cut his skin. With difficulty he climbed up to the branch, bruised and bleeding. When he realized that the honeycomb was a gunny bag, the three pranksters jumped with joy shouting “April fool! April fool!

Teddy began to cry and climbed down the tree and slowly made his way back home.

When his mom saw him, she was shocked. “What happened to you Teddy?” she asked. Teddy told her what happened.

Both Teddy’s mom and his brother applied ointment on Teddy’s wounds. “Don’t feel bad Teddy,” said Bob. “You should be more careful while dealing with such bullies. Stay strong little brother.”

A few days went by, Teddy’s mom packed toast and honey for lunch. Bob slipped a bottle of honey in to Teddy’s bag.

When the lunch bell rang, Teddy sat down for lunch and unwrapped the toast and honey his mom had packed for him. The smell of the fresh honey and the crunch of the crispy toast began to tempt Harry, Jolly and Bruno

“Hey Teddy, how are you? Are you still mad at us for the prank?” asked Jolly. “We were just having fun. Plus it was April fool’s day. Let’s all forget about all this and share some of your lunch with us”

As Jolly distracted Teddy, Bruno reached in to Teddy’s bag and pulled out the jar of honey. “I’ve got it! I’ve got it!” he cried. The three made faces at Teddy and opened the jar. They dipped the hands in to the jar and licked up all the honey. Suddenly Bruno’s eyes opened wide. Jolly and Harry spat out whatever was in their mouths and started looking for water to drink.

Teddy smelled the jar and realized what had happened. The jar contained honey, but it also had a special ingredient- vinegar. Teddy felt happy knowing that his brother, Bob was looking out for him. Bob knew Harry, Jolly and Bruno would pick on Teddy again and planted the ‘special jar of honey to give them a taste of their own medicine.

Teddy helped Bruno, Harry and Jolly wash the taste of vinegar away. The three of them had learnt a very valuable lesson and apologized to Teddy. They never played pranks again.