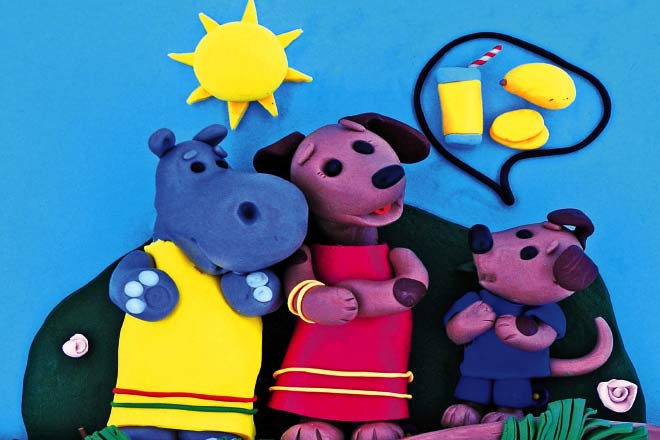 One early morning, Tommy, the dog and his mother left their house for the garden. Tommy was very happy, as his mother was going to take him for a walk in the garden.

“Mother, I don’t want to eat mangoes. I want to drink mango juice,” said Tommy. On the way, they met Ganju, the hippo. He asked, “Where are you off to so early in the morning?”

Tommy replied happily, “We have to go the garden to collect mangoes. Mother is going to make mango juice for me.”

Stan, the snail was also walking along the path. Tommy teased him. Stan was frightened. He walked along leisurely but he increased his pace as Tommy was irritating him.

Mother was upset by Tommy’s behaviour. “You shouldn’t annoy him. Didn’t you see how frightened he was? It is wrong to upset anyone,” his mother explained to him. Tommy wagged his tail in reply.

They reached the garden. As they entered they saw Sentry, the butterfly. She was flying along with her friends. Tommy’s eyes gleamed.

He ran behind the butterflies. The butterflies were playing hide-and-seek. However, seeing Tommy chasing them, they flew away. “Tommy, leave the butterflies alone and come to me!” His mother’s voice could be heard from a distance.

Seeing him leave, the butterflies resumed their game. However, they kept a lookout for him.

His mother said, “Let the butterflies be! It’s not nice to irritate anyone. Then only will anyone respect you.”

There were many mango trees in the garden. Strong winds blew the previous night. Thus there were many mangoes lying on the ground. Mother picked some up and put them in her basket. Initially, Tommy helped her but he soon got distracted. He moved away and saw Rani, the cuckoo sitting on a branch of a mango tree singing, “Kuku… Kuku…”

The cuckoo got scared, flew away to sit on another branch of a faraway tree.

Mother scolded him. She said, “I told you not to irritate anyone?”

Suddenly a ball fell right in front of him. He heard Gilly, the squirrel say, “Please give us our ball. We are playing cricket.”

At first, Tommy thought of irritating her but then he decided not to and threw the ball towards her.

“If you have time you can play with us,” said the squirrel. Tommy was very happy. He began to play with them. Seeing them play Rani also flew in, sat on a branch near them and began to sing.

The butterflies also flew around them. Seeing this Tommy became happy. He promised mother that he would never annoy anyone again.