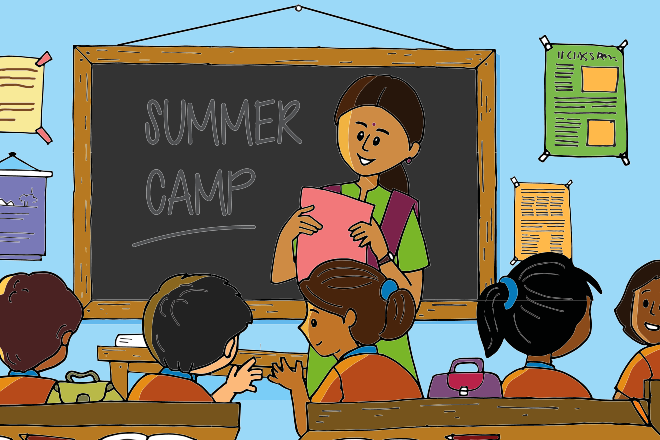 Rohan and Meera were close friends. One day when Meera saw Rohan sitting on the school ground looking glum, she asked what was bothering him.

“I am upset with the behaviour of Shashi and his friends. They are always troubling other children. Today they tore Gautam’s diary. I saw everything yet I could not do anything about it,” Rohan said sadly.

“Oh! So, this is the reason. You know they cannot be reformed. Why are you spoiling your mood by thinking about them?” said Meera trying to cheer him up.

Rohan agreed with her and quickly changed the subject to exam preparation.

The next day, the Principal circulated a notice to all the classes, announcing that students, who write a good essay on “Our Camp”, will be appointed as volunteers at the summer camp. Three students had to be selected from each class

All the children were very excited and quickly got down to writing the essay. However, Shashi as usual wanted to make trouble and he started disturbing other students and would not let anyone write their essay.

“If you keep troubling us like this I will complain against you to the principal. He is very strict and he will expel you from the camp,” Rohan said.

Shashi stared angrily at Rohan and reluctantly sat down in his seat.

Meanwhile Meera had gone to the washroom and when she returned she saw that the paper on which she had been writing her essay was not on her desk.

“Where is my essay?” Meera screamed. She looked for it everywhere. Hearing the commotion, their teacher entered the classroom.’ “Sir, Shashi has stolen Meera’s essay,” said Sonia. And all students joined her in blaming Shashi as he was the one who was always making trouble.

The teacher angrily said, “Shashi! I have been hearing complaints against you for a long time. Stealing is not a good behaviour. As a result, I am expelling you from the camp.”

I was watching Shashi all the time so that he does not trouble’s anyone and so, I can say that Shashi did not steal the essay,” Rohan explained.

The teacher announced that he would check everyone’s bag to solve the mystery of the missing essay. Each student was asked to step out of the classroom for the search to begin.

While the teacher was saying this, Sonia quietly tore Meera’s essay and put pieces of paper in Shashi’s bag.

During the search, as suspected, the essay papers were found in Shashi’s bag. He was called inside to explain them.

Now tell us, Shashi, do you still say that you did not steal the essay? These were found in your bag,” the teacher said showing Shashi the torn pieces.

Once again Rohan defended Shashi. “Sir, I have proof that Shashi is not the thief but Sonia is,” said Rohan.

“Sir! These are the bits of paper of the essay, that I found in Sonia’s bag. Sonia stole the essay and tore them inside her bag.”

“Then at the right moment Sonia shoved these bits of paper into Shashi’s bag. She did it so that Shashi would get caught and she would not be suspected,” continued Rohan. Sonia was asked to explain herself to everyone.

Sonia then said that she was jealous of Meera and stealing her essay was the only way to stop Meera from volunteering for the camp. Since Shashi had a reputation for being the troublemaker it was easier to put the blame on him.

The teacher expelled Sonia from the camp. Shashi thanked Rohan for his support and promised that from now onwards he would mend his ways. After some time, Rohan and Shashi became good friends. •