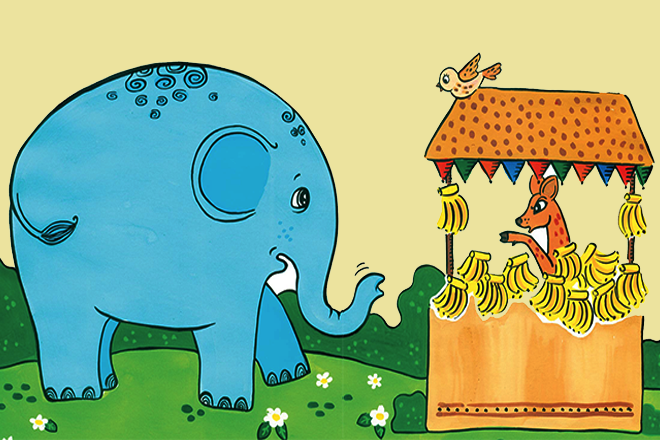 One morning, Honey Elephant woke up craving for some soft and sweet bananas. Though he liked all kinds of fruits, bananas topped his list. He walked out of his house, wondering where he would find a big bunch of bananas to satiate his enormous appetite. Honey walked towards a park. He saw a group of monkeys sitting inside. They were eating some ripe yellow bananas. Honey immediately stopped and looked at the bananas and licked his lips.

One of the monkeys, whose name was Jumpy Monkey, looked up at Honey Elephant and grinned. “Would you like a banana, Mr. Elephant?” he said impishly. Honey Elephant nodded his big head.

“Yes, I really would!” he said. “Then eat this!” Jumpy Monkey said cheekily. He then threw a rotten banana towards Honey Elephant. It fell near Honey Elephant’s big legs and smashed on the ground. Honey Elephant felt quite hurt. He walked away quietly.

Suddenly, Honey Elephant heard someone singing, “Buy bananas! Sweet bananas! Golden bananas!” It was Peelu Deer. He was pushing a cart full of yellow bananas to sell in the market. The sight of the plump and fresh bananas made Honey’s mouth water.

“I don’t have any money to pay you,” he told Peelu Deer politely. “But will you still give me a few bananas for free?”

Peelu Deer got very upset. “Hey! I am trying to make a living here and you want my bananas for free!” he scolded Honey Elephant. “Go away from here, you beggar!”

Honey Elephant walked away without saying a word. After being admonished by many more animals in the jungle, he felt very disheartened. “If I had the money, I could have bought an entire cart of bananas for myself!” he said to himself wishfully. Suddenly, Honey Elephant heard someone laughing. He turned around and saw that it was Goru Rabbit.

“Money doesn’t grow on the trees, Honey!” Goru Rabbit said. “You have to work for it to come to you.” Chunmun Sparrow, who was flying in the sky, saw Honey Elephant and flew down. She was one of Honey Elephant’s closest friends. “Hi Honey!” Chunmun Sparrow chirped. “I have some good news for you! I bet it will make you very happy!”

“Is that so?” Honey Elephant said. “What is it? Tell me quickly, Chunmun!”

“Well,” Chunmun Sparrow said. “A truck has turned over on the highway that’s behind the jungle. It was carrying a load of bananas to the nearby town. There are thousands of bananas lying on the road now. Just the sight of them made me think of you. I know how much you love bananas. And so, I flew all the way here, just to give you the news.”

“Wow!” Honey Elephant said excitedly. “That really is good news! I’ll go there right away and have a feast.” Honey then ran towards the highway. He found the spot that Chunmun Sparrow had told him about. A big truck was lying overturned there. Honey Elephant blinked. There were thousands of ripe bananas scattered there! When the truck driver and cleaner saw Honey Elephant, they panicked. “A wild elephant! Run!” they shouted as they ran to hide. “He might be dangerous!” Now, Honey wasn’t one bit dangerous. But he didn’t bother to tell them that. He had his eyes fixed on the bananas. He had never seen so many of them together. And there was no one to stop him from eating them now.

“The truck driver and helper must have been startled by the accident,” he muttered. “They will feel worse if I eat their bananas now.” Honey Elephant then straightened the truck and put the bananas back into it. “I don’t know why,” Honey Elephant said as he thanked them, “but I have never been happier than I am today. And I think it’s only because I chose to help you.” The truck driver and cleaner smiled. “Mr. Elephant,” they said. “We travel on this highway very often. And from now on, we’ll stop by every time we are here and leave some bananas for you to eat. You really are a helpful friend.” They then drove away, feeling quite happy. .

Honey Elephant walked back to the jungle with the bananas. He was feeling quite happy too. He had more bananas than he could eat now. And so, he invited all the animals and birds of the jungle to share them with him. He even invited Jumpy Monkey who couldn’t believe that Honey Elephant was being so generous when he had been so nasty to him.

“Thank you for inviting us over,” Goru Rabbit, Chunmun Sparrow and all the others told Honey Elephant later that day. “We had a feast today. And it was just because you chose to be honest and helpful.”

“Achieving something by being honest and helpful is much better than getting it for free,” Honey Elephant told them all. “I have learnt this very important lesson today!” All the animals and birds nodded and smiled. They were happy to see this positive change in their friend.