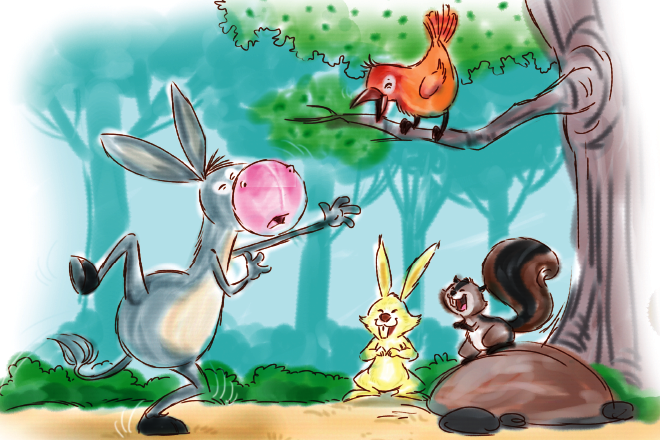 There was a donkey named Bondhu (meaning foolish). Bhondu was named aptly, as he would often behave foolishly. His favourite activity was to copy others. He knew nothing else. When he saw monkeys leap about he would copy them, although he would fall down and hurt himself. Seeing horses race he would try to run as fast as them. Even the passersby would laugh at his antics.

One morning, Bondhu was walking past a peepal tree. He heard Ginni, the cuckoo’s melodious voice coming from there. Her cooing was melodious.

“Wow, what a sweet song. I will also sing like her,” Bondhu thought to himself.

The next morning, Bondhu placed a chair in front of his house and began singing loudly. However, instead of cooing, he brayed hee-haw, hee-haw.

“Why is this happening?” he wondered. “I am trying to coo, but all that I can do is bray.” He was puzzled. He wanted to sound just like Ginni.

He met Ginni and asked, “Ginni, what does one do to sing like you?”

She replied, “You should learn to sing. A music teacher can teach you to sing well.”

He said, “So that’s what it is. I was thinking that I was incapable of singing. All I need is a teacher. I will learn and become a good singer.”

He soon found a teacher who taught several animals in the jungle. He sat with the others and learnt the basic musical notes. He went home and practised what he had learnt. However, his voice still sounded like a broken flute.

Bondhu thought for a long time. Finally, he remembered that his teacher had used a guitar while teaching them to sing. He realised that he was trying to sing without the guitar. He then sat down with his guitar and started singing again. His neighbour, the crow, screamed, “Grrr… I have been tolerating Bondhu’s harsh voice for so many days. I can’t tolerate it anymore.” Unfortunately for Bondhu, all his neighbours nodded their heads in agreement and told Bondhu to stop disturbing them.

“I have to face so many insults I just want to learn to sing.” Bondhu’s face fell. How could he practice if everyone around was objecting to it. He was almost in tears.

Mittu, the parrot who was passing by, asked, “What happened, Bondhu? Why are you so sad?”

Bondhu narrated the recent developments to the parrot.

Bondhu’s eyes were shining in anticipation. He bought some music discs and began singing along with them. However, he was still out of tune. He began to sing loudly. Although he realised that he couldn’t hold a tune, he still continued singing. After some time, no sound emerged from his throat. It was very sore.

“Well, Bondhu, are you enjoying your singing?” asked Minni, the bird, who was sitting on a branch nearby.

He replied sadly, “Go ahead, make fun of me and laugh at my helplessness.”

“I am not making fun of you. I am laughing at your foolishness. You cannot imitate everything. Nature blesses all individuals with certain unique gifts. Try as much as you can, you cannot get them by copying others. Since our brains are different we speak different languages. We also grasp things differently and at different paces. Bondhu understood. He thought, “By trying to copy the cuckoo, I lost my voice.” “Although it’s a bit late, I can still change myself.”

“Better late than never,” thought Bondhu, and he went in search of developing his own identity.