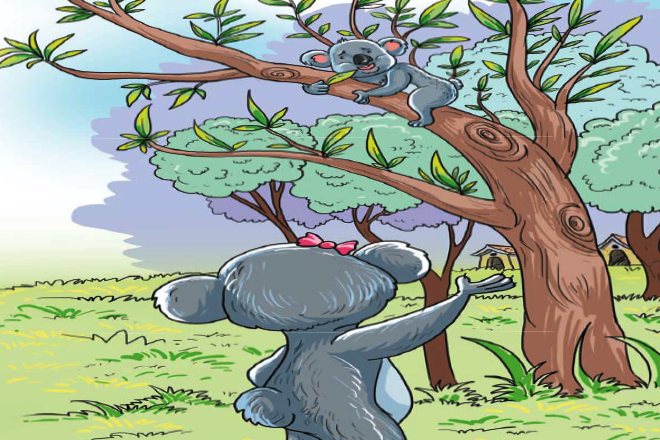 Koko, the koala was munching on delicious eucalyptus leaves when he heard his mother calling out to him.

“Koko! Please come down. We have to go out,” said his mother.

“No, Mom. I don’t want to go anywhere just now!” whined Koko. “I want to stay here and finish eating these leaves. You please go without me.”

“I want to introduce you to our new neighbour Lucy and her son. It’s important for you to know the other animals that live in the sanctuary,” said Koko’s mother.

“Mom is always giving me instructions. When will I have the freedom to do what I want?” Koko thought to himself and sulked.

“Koko! Did you hear what I just said? Come down please,” said his mother.

“Please, Mom!” Koko pleaded. “I don’t want to meet Aunt Lucy. I am terrified of her. She has strange legs! Her front is shorter to her legs at the back. And she hops so fast. That really scares me!”

“You’re being silly, Koko. Lucy is a kangaroo and kangaroos move by hopping. All animals are unique in their own way,” explained Koko’s mother. “Now hurry up! Lucy must be waiting for us.”

Koko climbed down the tree reluctantly and accompanied his mother to Lucy’s house.

“Welcome!” Lucy greeted them cheerfully at the door. Koko walked in apprehensively. Suddenly, someone tapped Koko on his shoulder.

“Sorry! I didn’t mean to scare you,” said a young kangaroo to Koko. “I just wanted to say hello. My name is Kenny.”

“Hi, Koko!” said Kenny with a wide smile. “Would you like to play with me?”

Koko loved to play, so he immediately said yes.

A Change in Time

“Let’s play in the park outside our house,” said Kenny, leading the way.

“Oh come on, Mother!” said Kenny in exasperation. “You know I’m very brave. Even the wildest animals are afraid of me.”

Kenny then turned to Koko and whispered, “My mother is always telling me what to do! Anyway, come on, let’s play with my boomerang.”

“It’s a wooden toy that is bent and when thrown correctly, it flies right back to you,” said Kenny.

In the park, Kenny showed how to throw the boomerang

“This is how you throw it!” Kenny said, flinging the boomerang like a Frisbee. Koko watched delightedly as the boomerang soared far and flew back right into Kenny’s hand. Koko became fascinated by it.

The two took turns to throw it. Without realising, they had ventured towards the far end of the park.

Suddenly, a big, black wolf appeared before them. Kenny and Koko became scared. “Shhhh? Koko silenced him. “Please keep quiet. Otherwise, the wolf will know we are alone.”

The wolf walked towards the two, eyeing them hungrily.

“What shall we do now?” asked Kenny.

“You are the brave one! You said so yourself that the wildest of animals are afraid of you,” said Koko.

“No, no, I am not! I just say that so that my mother will let me play outside. My mother has warned me numerous times about the wolves that roam the far edge of the park and I never listened to her. Please save me, Koko,” Kenny cried. Koko thought hard and then had an idea. He picked up the boomerang and aimed it at the wolf’s head and flung it.

The boomerang caught the wolf unaware, hitting it right on the head. The wolf fell down unconscious.

More From Champak: The Pizza Girl

“Quick! Let’s run back home before the wolf wakes up,” Koko said.

The two ran as fast as they could. As soon as they entered Kenny’s house, they ran straight to their mothers.

The kids narrated how they managed to escape from the wolf.

“If it wasn’t for Koko’s quick thinking, the wolf would have eaten us up!” said Kenny. “We now realise why you keep telling us what to do and what not to do. You are concerned for our safety and have our best interests at heart,” said Koko.

The mothers were happy that the kids were safe and that they had also learnt a lesson from their experience.