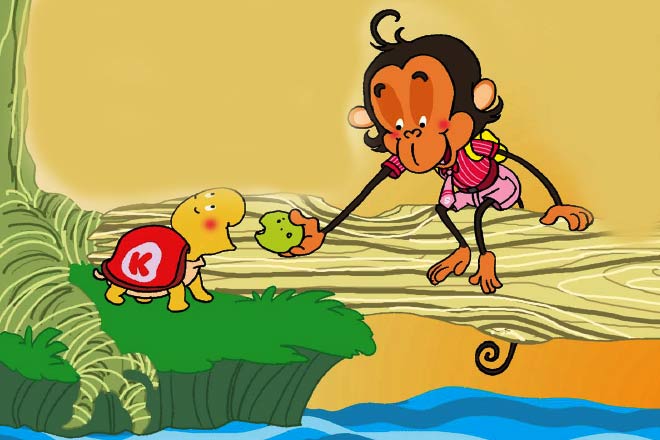 One afternoon, Bunty Monkey was returning home from school. He was crossing a tree over the river when he heard the sound of crying.

“I wonder who’s crying here?” Bunty said as he looked around. “Hello? Is there anyone out here?”

A little tortoise crawled out from behind a tree. Bunty saw that he was crying.

“Why are you crying, little one?” Bunty asked, looking very concerned

“I am hungry. My stomach is growling,” the tortoise wept. “My mum and dad are not at home right now and there is nothing for me to eat.”

“Don’t cry,” he said gently. “I have two ripe guavas in my schoolbag. You can eat them both.” Bunty then took two guavas out of his schoolbag and gave them to the tortoise.

The tortoise ate both the guavas very quickly.

He then looked up at Bunty and said, “My stomach is still growling. I am still very hungry.”

“Don’t worry,” Bunty told the tortoise. “There are some guava trees here. I will get you some more guavas to eat.”

Bunty then jumped around and plucked more guavas for the tortoise to eat.

He gave them to the tortoise who started gobbling them up.

“This little tortoise is finishing all the guavas I have given him,” Bunty thought to himself. “He really is greedy. I am much bigger than him but can hardly eat more than one or two. If he asks me for more guavas now, I will refuse.”

The tortoise finished the guavas. He then quietly crawled back behind the tree.

“What? He didn’t even thank me! What a rude little tortoise he is!” Bunty muttered as he picked up his schoolbag and walked home.

The next day, Bunty was returning from school when he met the tortoise again.

“I am hungry,” the tortoise said as soon as he saw Bunty.

“Aha!” Bunty said. “So you are hungry and alone again!”

Bunty put his schoolbag down and plucked many guavas for the tortoise.

The Finder Of Lost Things

He then watched as the little tortoise gulped them down and crawled back behind the tree.

The same thing happened the next day. And the day after that. And for many more days.

The tortoise would see Bunty returning from school everyday and tell him that he was hungry.

Bunty would pluck the guavas and give them to the tortoise who would eat them very quickly.

Bunty didn’t mind for a few days. But plucking guavas for the tortoise everyday after school tired him no end. He found it difficult to refuse the hungry little tortoise too.

One day, Bunty decided that he wouldn’t pluck guavas for the tortoise anymore.

“Why don’t you tell your parents that you get hungry when they are away? They should leave some food for you before going out. I can’t pluck guavas for you everyday, you know,” Bunty told the little tortoise.

The little tortoise looked up at Bunty and said, “My mum and dad leave a lot of food for me to eat at home. But Kittu finishes it all and then wants more food.”

“If Kittu eats all of your food, why don’t you complain about him to your parents?” Bunty asked surprised.

“Well, I am Kittu!” the little tortoise said innocently. He then quickly ate all the guavas Bunty had plucked for him and crawled away before Bunty could say anything.

“Wow! He has quite an appetite!” Bunty muttered and returned home.

A few days later, Bunty was very tired. He had a long and tiring day in school. He was on his way home when he saw Kittu waiting for him on the other side of the river.

“If he asks me to pluck guavas for him today, I will firmly refuse,” Bunty thought as he started to cross the river.

“Hey! You’re late today! Did it even cross your mind that your friend must be hungry and waiting for you?” Kittu said as soon as he saw Bunty.

“Which friend of mine is hungry and waiting for me?” Bunty asked surprised.

“Who else but Kittu?” Kittu said innocently.

Bunty couldn’t help smiling. He immediately put his schoolbag down and plucked some guavas for Kittu to eat.

Bunty didn’t see Kittu for many days after that. He assumed that Kittu’s family had shifted to another part of the river.

It was a rainy day a few weeks later. Bunty was returning home from school when it started pouring heavily. There was thunder and lightning too.

Bunty jumped onto a tree and began crossing the river. The tree’s branches were wet and slippery because of the rain and Bunty found it difficult to balance himself. He slipped and fell in the river. “Are you all right?” a small voice asked as Bunty lay on the river bank.

“Yes, I am,” Bunty said, wondering who had saved his life. He sat up and looked around to see who his rescuer was.

“Kittu? You saved me?” said Bunty surprised to see the little tortoise. “Where have you been?”

“Yes, I saved you!” Kittu laughed. “I was on a holiday. I returned just today. In fact, I was hiding behind the tree and waiting for you so that I could surprise you. I saw you fall into the water and jumped in to help you.”

“Please don’t thank me! Friends are supposed to help each other,” Kittu said cheerfully. “Your clothes are wet. Why don’t you come to my house? I will give you my clothes to wear.”

“We will meet tomorrow then. I hope you will pluck more guavas for me!” Kittu said. “Of course!” Bunty said and waved. He then walked home happily. He was glad that he had met Kittu.

Plucking a few guavas now and then for a hungry little tortoise had made him a friend who had saved his life.

One thought on “Do Good and have Good”