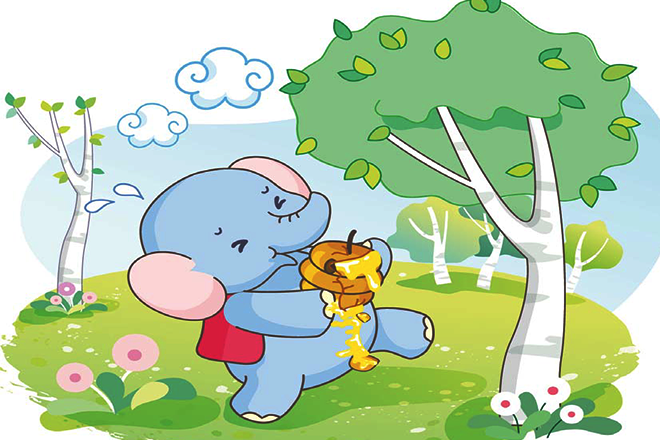 Ellie, the young elephant calf lived in the forest of Green Woods. He was much bigger and stronger than his friends, because of which he would often get into trouble unknowingly.

Once, Ellie saw a beehive on the branch of a tree. Fearing that the beehive may fall and the bees might hurt themselves, Ellie decided to help by placing the beehive down on the ground. When he tugged at the branch, he held it too tightly and broke it. The bees swarmed out of the hive angrily and scolded Ellie for being careless.

Another time, Ellie’s friends were playing football with Monty, the monkey’s new ball. In his eagerness to play, Ellie kicked the ball so hard that it burst with a loud boom! The children were angry at Ellie for ruining the ball .

After this incident, his friends started to avoid him. But Ellie Could not understand what his mistake was.

One day, when the children did not include him in their game, Ellie sat alone under a tree and started crying.

Barry, the bear, who was passing by, saw Ellie crying. He stopped to ask, “What is the matter, Ellie? Why are you crying?”

Ellie told Barry how all his friends had stopped talking to him baecause he always messed things up.

“Don’t worry, dear Ellie. The day you do a good job, everyone will realise your good intention and become your friend again,” consoled Barry.

“Thank you for the kind words,” said Ellie, feeling a little better.

The next day, as Ellie was walking by the playground, he noticed that the plants around the playground had become dry and their flowers had wilted.

“Perhaps, I should water these plants and make them bloom again. That way all my friends will notice what a good job I’ve done,” thought Ellie . Ellie filled his trunk with water from the nearby pond and sprayed it on the plants. He did this a couple of times. But because his trunk could hold a lot of water, the plants become damaged from too much water and the ground become slushy, too.

Ellie’s friends who turned up at the playground become more angry with Ellie for not only spoiling the plants but also making the ground unsuitable for them to play in.

Three days had passed since that incident and nobody had spoken a word to Ellie. Ellie felt alone and was depressed as he still could not understand what he had done wrong.

“I watered the plants to save them from dying. Doesn’t that means I did a good job? Then, why are my friends not talking to me?” he wondered sadly.

That night, it began to rain heavily. By morning, it had rained so much that the lowlying areas of the forest were completely flooded. The animals began to panic.

It was important they crossed over to the other side of the river that had higher ground which would not get flooded easily. But it was dangerous to attempt to cross the river because of the strong current that was caused by the flood waters.

Barry asked the big animals to carry the smaller ones across the river on their back.

Ellie came forward and said, “I want to volunteer as well. I can carry my friends across the river.”

Barry said, “Good! We need all the help we can get. Now, follow me and we shall all cross the river together.” Ellie’s friends apprehensively climbed on to his back and held on to him tightly as he crossed the river.

“Thank you for bringing us across the river, Ellie,” said a grateful Monty, after they reached the other side.

“Thanks to you, we are all safe now,” said Ricky, the rabbit. Ellie brimmed with

“Good. Now, I need you to do TRISHAGNI one more thing,” said Barry. He picked up a rock and said, “ Everyone must be hungry. Can you please collect some berries using this rock?”

“But this rock is too big. The berries will be crushed,” said Ellie.

“Yes, you are right,” said Barry. “In that case, bring a jackfruit from that tree and carry it in this banana leaf.”

“Oh, barry! The banana leaf can’t take the weight of the jackfruit ! Each task has to be done a certain way,” said Ellie.

Barry smiled. “This is exactly what I was trying to make you understand. Just like that jackfruit and the rock, your strength may not be suitable for doing certain things. So, you have to careful when kicking a football and watering the plants with your trunk. But at the same time, your strength was useful in helping carry your friends across the river,” said Barry.

The realisation dawned on Ellie.“ Finally, I understand that if I don’t learn to use my strength correctly, I can damage things. From now on, I will be more careful,” he said. “Now, I have an idea on how to put my strength to good use.”

Ellie walked up to the guava tree and shook it with all his might. A bunch of fruits fell from the tree. His friends immediately picked up the fruits and ate them as they were hungry.