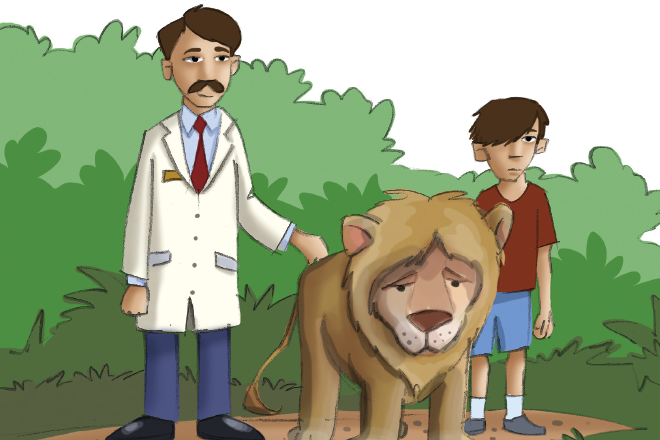 Dr. Fancy and Mac were headed to the jungle in the African savannah. Sam, the lion, was sitting quietly with them in their jeep.

Dr. Fancy caressed Sam’s head affectionately and said, “Sam, lions are supposed to live in jungles, not in human homes. You should also learn to enjoy living in the jungle.”

Sam hung his head low. Dr. Fancy again said in a loving tone, “I understand, Sam. You must be thinking how will you live alone without us, isn’t it? Sam, you have grown up now. You can certainly live on your own. You don’t need to be scared. All the lions of the jungle are just like you. The only difference would be that they would be ahead of you in certain things. But then, even you are a lion! So don’t be frightened.”

Dr. Fancy’s words could do nothing to soothe Sam’s fears. He turned his face in the other direction and sat quietly.

Some years ago, Dr. Fancy and Mac had brought Sam home. He was just a cub then. He had lost his mother and looked very vulnerable.

Dr. Fancy and Mac had raised him in their home, but when Sam grew up; they realized his need to live in a jungle. So they decided to take him to his real home in the African jungle.

Sam was now a pet lion. He had grown very close to Dr. Fancy in all these years. Naturally, he was upset at their decision.

Soon they reached the jungle. It was time to leave Sam there.

“Sam, don’t be scared. We will stay with you until you get comfortable here. So Sam, go on. See what the jungle is like. After all, this is going to be your home,” Dr. Fancy kissed him tenderly.

Sam walked on. He had tears in his eyes, but what could he do? He couldn’t disobey Dr. Fancy. Also, he was curious to see the jungle.

He had just gone a little further when he saw some wild buffaloes. Sam became stiff upon seeing them. When the wild buffaloes saw him scared, they saw this as a chance to dominate him. When they moved towards him, Sam ran back and hid behind Dr. Fancy.

“Sam, they are just wild buffaloes. You got terrified of them!” Dr. Fancy realized now that he had deprived a lion of his actual wild nature. Dr. Fancy prepared himself and trained Sam to fight them.

Sam was ready now. He walked towards the jungle again. This time he met a pack of wolves. Sam stopped in his tracks, but then he remembered Dr. Fancy’s words, “You are a lion, Sam.” Sam walked ahead with confidence. All the wolves got intimidated and ran away. Sam had gained some self-assurance by now. He kept wandering in the jungle through the day, but he hadn’t met any lions till then.

Later that day, Sam came running to Dr. Fancy around midnight. Dr. Fancy didn’t notice it until he switched on the torch that Sam was badly wounded.

“Oh, his condition proves that he has met other lions. They have attacked him savagely,” Mac said.

Dr. Fancy felt disappointed. Sam had not been able to fight and this fear had led him to come back to them.

It was a question of Sam’s life. He couldn’t do anything without Dr. Fancy.

Dr. Fancy began giving him intense training from the next day. Sam would enter the jungle every day, but would come back injured.

After a few days, Sam didn’t return at night. That entire night the jungle reverberated with the roars of lions. Dr. Fancy got very worried about Sam.

With the breaking of the dawn, Dr. Fancy and Mac set out to find Sam. What they saw lit their faces up. It was Sam, who had injured four lions. Sam had woken up to his nature. Now he was ready to be a part of the jungle. Sam strengthened this belief and Dr. Fancy was happy now.

Sam had made a place for himself in the jungle now. All the lions were afraid of him. He was treated as the king of the jungle.

Seeing this Dr. Fancy and Mac were happy. They gathered their stuff and moved towards their vehicle. Right then, they saw Sam running towards them.

“Hey Sam! What are you doing here? Have you come to bid us goodbye?” Dr. Fancy and Mac became very emotional. “There is no danger to you now. I am happy that you will be able to become the king of the jungle.

I was worried about your safety, but now that fear is gone. You are very brave. Go, and be happy in the jungle.”

Dr. Fancy patted Sam’s cheek, but Sam had tears in his eyes. He climbed up the vehicle, as if saying, “You wanted me to be brave, and I did that. Now take me back. I can’t live without you.”

Dr. Fancy read Sam’s feelings from his eyes and hugged him tightly while sobbing himself.

“How will I live without you, Sam? What a fool was I that I thought that you were coming to us out of fear, but you were coming for us and even now you are pleading so much. But Sam, your future is in the jungle. Please understand.”

Dr. Fancy caressed Sam. Mac switched on the ignition, but Sam didn’t get down. Dr. Fancy insisted on waiting for a few hours and then the vehicle sped towards the city. Sam was still sitting in the rear seat.