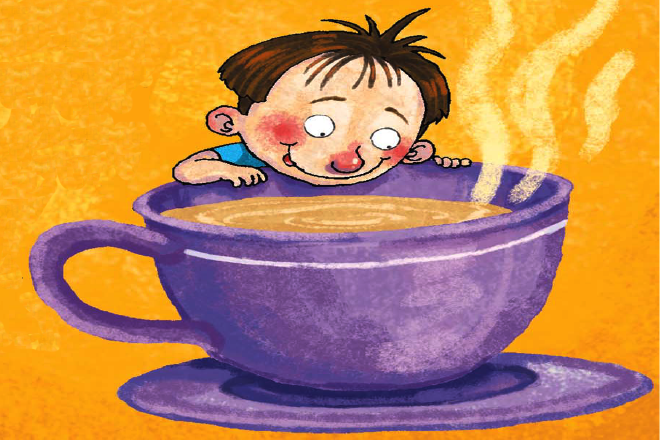 Mother!” Vinay called out when he woke up one morning. “Please give me some dugdh jal mishrit sharkara yukt parvatiya booty. And please hurry!”

“I’ll get it right away,” Mother replied from the kitchen.

“What is the matter, Vinay? Are you feeling unwell?” Mother asked when she entered the room with a cup.

Also read: The Fight- The battle for balloon is on its verge between the animals. Read and find out who wins it.

“Well, you did ask me to get you this concoction of herbs, didn’t you?” Mother said, handing Vinay the cup.

“Huh? When did I ask for a concoction of herbs?” Vinay asked, peeping into the cup.

“Vinay,” Mother said. “Didn’t you just call out to me and ask me to give you some booty?”

“Oh Mother!” Vinay said. “You misunderstood me. I asked you to bring me dugdh jal mishrit parvatiya booty. That’s another name for tea.”

Vinay shrugged and got out of the bed. He then went to take a bath. After a while, he called out to Mother again. “Mother!” he shouted. “I can’t find my kanth langot.”

“I can’t find my kanth langot!” Vinay repeated. “Wherever did you keep my necktie?”

“I won’t be able to finish my household chores if you keep confusing me just because you want to be mischievous.”

Mother then took Vinay’s necktie out of the wardrobe and put it around his neck.

“Mother, I am not being mischievous,” Vinay pleaded innocently. “Really!”

Later that day, Vinay’s teacher was testing the students’ GK in the classroom. “Children,” he said. “Tell me, what is Thomas Edison’s most famous invention?”

Vinay smiled and raised his hand to answer the question.

Also read: The Boring Day of Pickly Wibble the Hedgehog

“Sit down if you don’t know the answer,” the teacher said, upset.

“Children,” he then told the class. “Thomas Edison invented the electric bulb.”

“Sir, I was saying the same thing,” Vinay stood up and insisted. “The vidyut prakashiya kanch golak is another name for the electric bulb.” All the students in the class laughed heartily.

“Be quiet!” the teacher shouted. “Now, answer the next question. Which game is the Ramanuj Trophy associated with?”

“Vinay,” the teacher said angrily. “Are you making fun of me again? I had no idea that you could be so disrespectful.”

“Sir,” Vinay said sincerely. “I would never do that. But please believe me when I say that ashthkoni kashth falak pe le takatak de takatak is another name for table tennis.”

“Please keep quiet for the rest of the class, Vinay,” the teacher said furiously.

Vinay didn’t like being shouted at even though he had answered correctly.

But he obeyed his teacher and didn’t speak again.

“Rahul!” Vinay called out to his friend and neighbour when he returned from school later that day. “Will you come with me to watch the gol guttam lakad battam de danadan match? I have an extra pass.”

“What is that?” Rahul asked curiously.

“Yes, Vinay!” he said cheerfully. “Even I want to watch the match between India and Pakistan. We will have to go to the stadium by train. So let’s leave right away.”

“Now whatever is that?” Rahul asked, staring at Vinay.

Also read:BANANAS GALORE- Honey Elephant walked out of his house, wondering where he would find a big bunch of bananas to satiate his enormous appetite.

“Which language are you speaking in today, Vinay?” Rahul asked, giggling. He was unable to control his laughter. Vinay’s incoherent jabber had made him feel both curious and thrilled.

“Ah!” Rahul said and laughed. “So that’s what you’ve been up to today.” Praveen Uncle, who was the boys’ neighbour, saw them laughing.

“Uncle,” Rahul told Praveen Uncle. “Vinay has resolved to talk in a new language from today.”

“Son, your new teacher has taught you the correct thing,” Praveen Uncle said. “But you have not understood what he really meant.”

“What makes you say that, Uncle?” Vinay asked, surprised.

“We should definitely respect our national language,” Praveen Uncle said, “but along with that, we should also know other languages so that we progress in life.”

“Tell me,” Praveen Uncle then said. “Why do we use a language?”

“So that we can communicate our thoughts to others,” Vinay said.

“Vinay,” Praveen Uncle then said. “Is everybody able to understand you from the way you are speaking today?”.

“No,” Vinay said, sounding disappointed. “Everybody is making their own inferences about what I am saying. Mother thinks I’m being mischievous while my teacher thinks I’m making fun of him.”

“A language should be such that it is understood by everyone. Did you know that words from other languages were included in Hindi in order to make it easier to understand? That has made it possible for it to reach out to more people than it originally did.”

“Is that so?” Vinay and Rahul asked, astonished.

“Yes,” Praveen Uncle said. “Not only English but words of Sanskrit, Urdu, Arabic, Persian, Marathi and many other languages have assimilated with Hindi. And you will be surprised to know that Hindi is now being taught in schools and colleges all over the world.”

“Uncle, I have now realised that the knowledge of other languages is as important as that of one’s own national language. Knowledge is never a setback in one’s progress. In fact, it facilitates it all the more!” Vinay said cheerfully. “Good idea!” Rahul said, laughing. “And after that, let us all go for the gol guttam lakad battam de danadan match. I can’t wait to see India win!”

Everyone laughed and walked towards the tea shop.