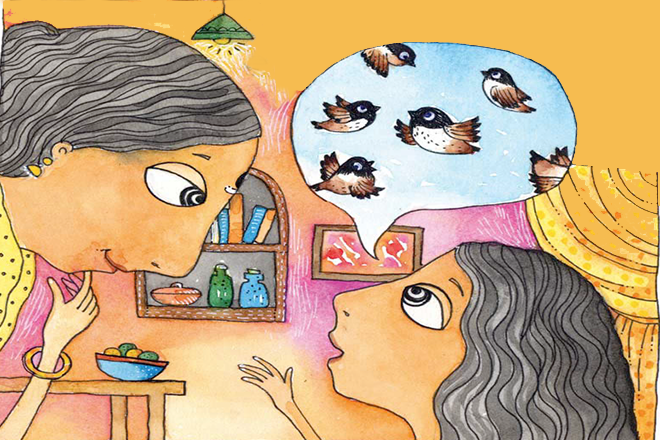 One day, Nivedita was returning home from school by bus. Throughout the journey, she kept thinking about what her teacher had said in class that day: “Today is March 20—World Sparrow Day. How many of you have seen a sparrow? If you haven’t seen one, look it up on the internet; or better still, ask your parents about it. They will have plenty to share about these little tweeters.”

That is exactly what Nivedita did. As soon as she got home, she asked her mother if she had seen a sparrow.

“Of course, I have seen plenty of these little birds in my mother’s house when I was growing up in Bengaluru,” said her mother. “Our house was an old style, single-storied structure. We had a big garden. In the month of March, we would hear the birds chirping all the time. The old house had a garage and many cozy places for them to build their nests.”

“How wonderful!” exclaimed Nivedita. “Our teacher said that we should write an essay about the sparrows, so I better make a note of all that you’ve just told me.”

“Why don’t we go to Grandma’s house over the weekend? You can spend a lot of time in the garden and observe all the garden creatures. It’s a pity that the sparrows are disappearing though,” said her mother.

“What a pity! That’s what our teacher said as well, that the sparrows are hardly spotted these days. She asked us to talk to people about it and find out more,” said Nivedita.

“Then Grandma is the right person to talk to. She has many sparrow stories that she used to tell me when I was growing up,” said Nivedita’s mother.

Nivedita, along with her mother, travelled to Bengaluru to visit her grandmother. She was eager to know everything about the sparrows.

Grandma was delighted to share her stories with Nivedita. “We grew up with the chirpy little birds flying in and out of the house. They would peck at a few grains of rice and dal which we would have thrown away while cleaning. They would also take some food back to their little ones,” said Grandma. “Where would they build their nests, Grandma?” asked Nivedita curiously.

“They would build nests anywhere and everywhere, on trees to inside the house—in the attic or the gap in the walls. Your mother and her sisters would be excited to watch them at work, flying in and out of the house with straws in their little beaks to build their nests,” explained Grandma.

“Soon, they would lay eggs and then the baby sparrows would hatch from them. And one fine day, they would all fly away. The kids were strictly told not to disturb the little birds during this time,” she said.

“There were folktales and songs about these sparrows. But now they have all been forgotten,” Grandma said sadly. “Why did they disappear?” asked Nivedita.

“Cities have expanded and agricultural lands have shrunk. The old style houses have given way to huge apartments that have no space for these birds to build their nests. The sparrows feed on insects, too, but spraying pesticides and insecticides have killed the insects leaving nothing for birds like them to feed on,” said Grandma.

“But there is some good news,” said Nivedita’s mother. “I just read in the newspaper about how some early morning passengers spotted a few sparrows in the Bengaluru International Airport!”

“It is a huge building with enough space for lots of sparrows to build nests. Plus, there are lots of fields adjoining the airport that may have insects which they can feed on,” said Grandma. “Hurrah!” cried Nivedita. “I will conclude my essay with this good news, Grandma!”

“On our way back, make sure to look out for them at the airport. You could even click some pictures of them on my phone and add them to your essay,” suggested her mother. Nivedita was excited. “That is a great idea! I hope I get to see them. That will be a perfect end to this weekend!”