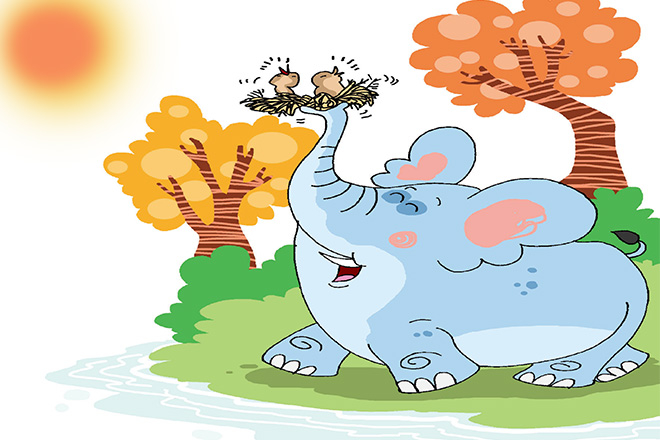 In the forest of Kumudvan, all the animals lived in peace and harmony. All this was until Rambo, the elephant decided to wander in.

Rambo lazed around all day. When he was bored, he ate as much as he could and roamed around the forest looking for the next animal he can play a prank on.

One day, Cheechee, the sparrow had flown away in search of food for her chicks. Rambo picked up her nest with the chicks inside and left it by the riverside. The scared little chicks cried a lot and attracted all the birds in the area.

It was only after they shouted at Rambo for doing such a mean thing that he put them back. “Don’t take it personally. It was all in fun,” he said and walked off into the forest.

Day by day, his antics grew worse. One time, he destroyed an entire ant colony and another, he flooded the rabbits’ burrow with water. When the animals asked him why he did such things, he would simply say, “Don’t take it personally. It was all in fun.” With time, Rambo realized that the rest of the animals were scared of him because of his size. He started taking advantage of this. When Chimpy, the monkey was taking a bunch of bananas to his sister’s house, Rambo stopped him and took them from him.

“I’m the strongest in the forest. I can do whatever I want,” he said and walked away.

At the watering hold, he had terrorized all the animals. “I am the strongest in the forest. I will always be the first to drink water. You can come and drink only after I leave. Or else, you will have to face the consequences,” he said to them.

All the animals of the forest were getting tired of Rambo’s ways. They called for a meeting and by the end of it, knew exactly how to put Rambo in his place.

More From Champak: Dadaji And Bullying

They arranged for a pot which Chimpy hung on top of a tall tree. The animals announced that they were conducting the competition and the winner would be the animal who manages to break the pot.

Lots of animals tried and failed. The pot was too high up for them to reach. Then, it was Rambo’s turn. He walked up to the tree, fully confident that he would reach the pot without any effort. He stretched out his trunk but couldn’t reach. He tried again and again from different angles and still couldn’t reach. The other animals watching began exchanging whispers. Rambo knew it was about him and was determined to show them who’s boss. He stood right under the pot and reached up with his trunk, standing on his hind legs. As he caught it, a big smile spread across his face. But his smile didn’t last long and was quickly replaced by a shock and surprise.

As he grabbed the pot, it tipped over and stinky, slimy mud splashed all over his face. Seeing Rambo, all the animals began laughing

“What is the meaning of this?” bellowed Rambo.

“Don’t take it personally. It was all in fun,” said the animals together.

“You thought you were the strongest in the forest, didn’t you? But we tiny animals of the forest have had the last laugh. We are a peace-loving bunch and we don’t like trouble. That’s why we remained quiet all this while. If you want to stay here, then you will have to change your ways Rambo and live with us is peace and harmony,” said the animals.

Rambo felt embarrassed and ran away.