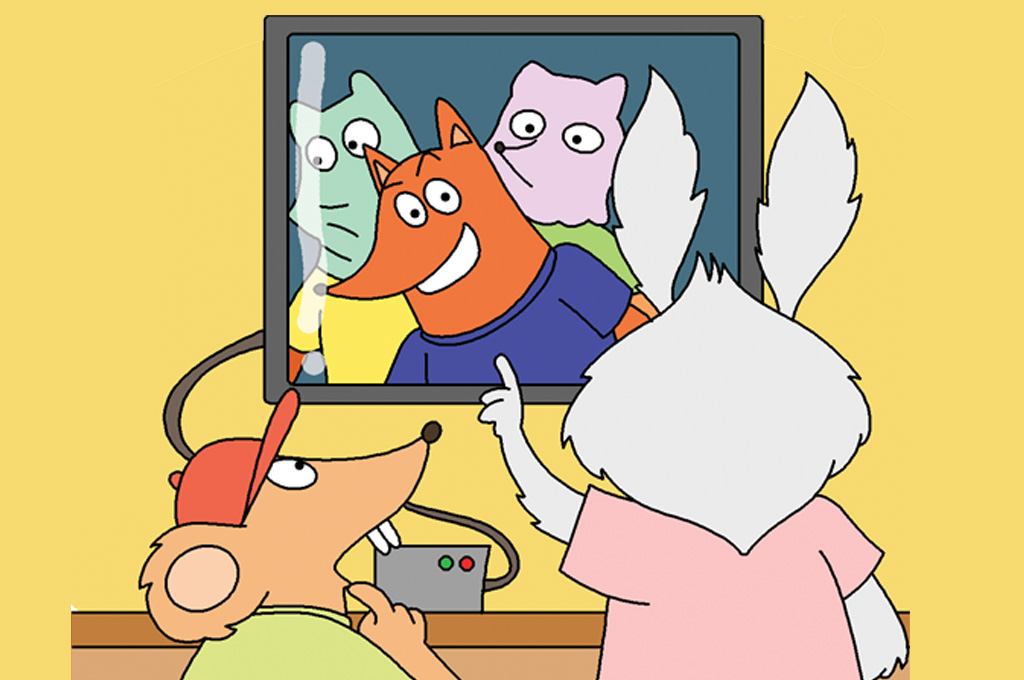 Cheeku rabbit went to the palace to meet King Shersingh.

“What’s the matter, Your Highness? Why did you want to see me urgently?” asked Cheeku

“I’m sorry to have disturbed you so early in the morning, but have you read today’s newspaper?” asked King Shersingh.

“I haven’t read the paper yet, Your Highness. I was still sleeping when you called and I came immediately,” replied Cheeku.

“There is a report in Champakvan Times about a theft that took place last night. The thief has stolen lots of valuables from Blacky bear’s jewellery shop,” said King Shersingh, pointing at the newspaper.

“Yes, you are right. However, I want to draw your attention to something else mentioned in the report. Here, read the newspaper report,” said King Shersingh, handing the newspaper to Cheeku.

According to the report, the thief entered Blacky’s shop at around midnight and stole all the jewellery. It also mentioned that the thief’s face was captured by the CCTV cameras installed in the shop and he was identified as Baddy fox.

Cheeku was astonished. “How is this possible? Isn’t Baddy in jail?” he asked.

“This is what I wanted to discuss with you, Cheeku. Yes, Baddy is in jail. The guards have also confirmed that he was in jail last night,” said King Shersingh.

“Could it be possible that Baddy escaped from jail for a few hours and somehow managed to get back by morning?” asked Cheeku.

“No, Cheeku. That is not possible as the jail is well guarded and there are cameras installed everywhere. There is no way he could have got out unseen,” informed King Shersingh.

“Maybe a guard may have helped him to get out of jail,” said Cheeku.

“That’s not possible either. I have full faith in all the guards working at the jail,” said King Shersingh.

King Shersingh hesitated for a moment and then said, “There is one more thing. Baddy knows black magic. Do you think he could have used it?”

“Black magic? Have you also started believing in such things?” asked Cheeku.

“A few days ago, Champak Times reporter Sonu deer had interviewed Baddy. At that time, Baddy claimed that he knew black magic and that he could use it to travel to any place and do anything. Now, more questions will be raised after these robberies,” said King Shersingh.

“This is indeed a complicated matter,” said Cheeku.

“Cheeku, you are the only one who can solve this. Please do something,” King Shersingh said.

“I’ll start working on this right away,” assured Cheeku.

Cheeku called up Meeku and requested him to help. The two then went to Blacky’s jewellery shop. After asking the police for permission, Cheeku and Meeku went inside and saw that everything was in a mess.

Cheeku then repeatedly played and checked the camera recordings. When Meeku saw a smile on Cheeku’s face, he said. “I think you have found a clue. Do tell me as well,” said Meeku.

Cheeku paused the recording and pointed to the screen. “Look carefully,” he said. “Three animals walk in to steal the jewellery. Two of them have covered their faces with a mask. However, only Baddy’s face is not covered. He also keeps looking at the camera. It appears as if he wanted his face to be captured by the camera.”

“You are right. But how is it possible for Baddy to be in two places at the same time?” asked Meeku.

On that “I am confused as well. Let’ go talk to Baddy,” said Cheeku.

Cheeku and Meeku went to the jail.

“What is the matter, Cheeku?” asked Baddy casually.

“I want to ask you a few questions,” replied Cheeku. “Where were you last night?”

“So, it wasn’t you that broke into the jewellery shop last night?” asked Cheeku.

“Ha ha! That was me! Using black magic, I can travel to any place. These bars can’t restrain me!” replied Baddy.

“I am sure there is some explanation behind all this. I will find out soon,” said Cheeku.

“What if Baddy puts some spell on you?” asked Meeku nervously.

“Black magic is a hoax. He is trying to fool us. Come, let’s meet Jumpy monkey, the jail warden,” said Cheeku.

Jumpy was eager to meet Cheeku. He asked, “Were you able to find out how Baddy was able to get out of jail? Does he really know black magic?”

“I haven’t fully understood what is happening but I know that there is some trickery going on. Please give me the list of people who came to visit him recently,” said Cheeku.

“Only Laptu jackal comes to meet him. Both of them speak for a long time, but the guards don’t understand what they talk. They talk to each other in a different language,” said Jumpy.

Cheeku was intrigued. Meeku noted the date and time of Laptu’s visits. They then went to meet Titu butterfly. Cheeku requested her to keep an eye on Laptu. Next morning, King Shersingh called Cheeku and Meeku to the palace.

At the palace, King Shersingh said, “There was a robbery again last night. Items worth lakhs of rupees have been stolen from Damru donkey’s shop. The cameras in the shop show Baddy and two other masked animals stealing everything.”

Cheeku and Meeku were astonished. They immediately went to Titu. She told them everything she had observed about Laptu.

Cheeku and Meeku returned to their house and devised a plan. Then, he called some of the animals to help.

“We have to spread a rumour about a diamond that is kept in the Champakvan museum. Let it reach Laptu’s ears that since there are so many robberies happening, King Shersingh has ordered it to be shifted to another museum in the neighbouring forest. As this is being done in a hurry, there won’t be much security and there will only be a few cameras in the room,” Cheeku told the animals.

As planned, the rumour reached Laptu. So, he rushed to the jail to meet Baddy.

When Titu informed Cheeku about it, he said, “We will get to know everything tonight.”

That evening, Cheeku and Meeku went to the museum and hid behind some bushes from where they could see the entrance clearly.

By midnight, a vehicle came to halt outside the museum. Three animals alighted from the vehicle and entered the museum.

Cheeku quickly phoned the police. The police arrived and arrested all the three animals inside the museum. King Shersingh too arrived at the scene.

“How come Baddy is here when he should be in jail?” asked King Shersingh.

“That is because this is not Baddy, but his look-alike,” said Cheeku smiling.

“The look-alike is the one who committed all the robberies. While committing the crimes, Baddy would pretend to use black magic. Thus, everyone started believing that Baddy was using black magic to move in and out of jail.”

The look-alike said, “Yes, he is right. My name is Bobo. I recently came to Champakvan in search of a job. When Laptu saw me and he befriended me and then told me about this plan. I agreed to do this as I was in need of money.”

Bobo added, “Laptu would meet Baddy and make plans. They communicated in some secret language so that no one would be able to understand them.”

Meeku turned to Cheeku and asked, “How did you figure out Bobo is a look-alike?”

“Bobo’s face was clearly seen in the camera recordings of all the shops. Although Bobo looks like Baddy, if you observe carefully, you will find some differences. Also, the recording shows Baddy with long nails, but that afternoon when I visited him, he had short nails. That is why I thought that the robber was not Baddy but his look-alike.” Everyone praised Cheeku for his intelligence.