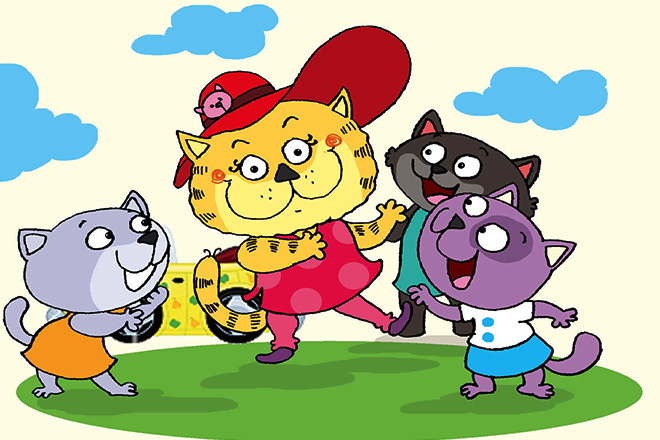 Fanny, the cat, had just come back from the city, and she had completely changed. She wore a fancy hat, had on a pair of dark sunglasses and wore a bright pink suit.

All the other cats at Kittyville surrounded her. “Where have you been?” “You look so stylish!” “Were you at the city, mausi?” they asked.

“Call me aunty,” said Fanny. “I was in the city. I had a fashion show there. I just got back.”

“Aunty, what did you get us from the city?” asked Gullu.

“A mouse cage trap?” the other cats murmured amongst themselves.

“With this, chasing mice is a thing of the past. All you need to do is put some food on the hook inside. When a mouse enters and pulls on the piece of food, the door slams shut and the mouse is trapped,” explained Fanny.

“I’ve brought enough for everybody and it can be yours for the tiny sum of Rs. 1000, only,” said Fanny pulling more traps from her car. Soon, all the cats began using the mouse traps to catch mice. Wherever they would see a burrow, they would leave a piece of bread in the mousetrap and place it nearby. The mice being simpleminded would get caught.

Seeing the number of mice in the area dwindling sharply, Manny, the mouse decided to bring all the mice together for a meeting.

“Brothers and sisters, you must be aware of the trap Fanny, the cat has distributed among all the other cats. We need to get the word across to all the mice that they need to avoid the trap at all costs,” said Manny.

“But how?” asked Jimbo, the mouse rubbing his fat tummy. “We are mice. If we see food, we jump at it immediately.”

“We have begun maintaining a stockpile of food in the burrows,” said Pinky, the mouse. From now on, the only thing we must worry about is not getting trapped.

Soon, all the mice began thinking twice before approaching any food placed inside a cage. The cats were very unhappy about this.

With the cats no longer needing to chase after mice, they had all grown fat. They would grow short of breath very quickly. They realized that their lives were much better before Fanny brought them the traps.

“I have a solution to this,” said Fanny. “The problem is that you have all grown fat. But I have a special tea that I brought back from the city. If you drink it for a month, you’ll be as slim as me and it only costs Rs. 1000, only!” The cats may have fallen into her trap before, but they weren’t going to this time. They all ran after her and chased her away back to the city.