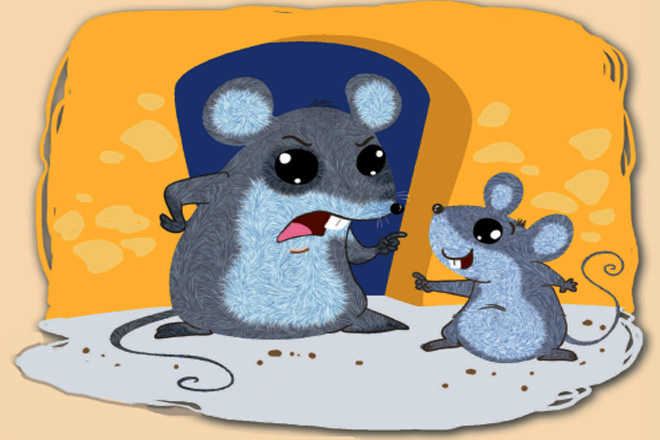 Where have you been Sonu? How many times do I have to call out to you?” Charu, the dormouse, asked her son Sonu.

“I was just outside watching people passing by. I can take care of myself,” he said confidently.

“How many times have I told you not to go outside without telling me? It’s a dangerous place, and that cat seems to have settled down there. Please be careful,” saying so, Charu embraced Sonu.

One day when Sonu had entered their neighbour’s kitchen looking for food, one of the people living there opened the fridge to pull out a bottle of water. The light from the fridge caught Sonu’s attention and what was inside kept him glued. Sonu had never seen so much food in one place. When the human walked away, Sonu ran back home.

He narrated the entire story to his mother. “If you were there you would have jumped in and made off with all the food you can carry,” he added.

Charu was not as excited; instead, she said seriously, “Listen and listen carefully.” “Don’t even think about going near that fridge. It is dangerous, and you will regret it if you do.”

Her reaction shocked Sonu, “But Ma, we spend the entire day looking for food, and if we are lucky, we find enough to eat. All the food we need is in that fridge. Why shouldn’t we steal food from the fridge?” said Sonu.

“Don’t argue with me. What do you plan on doing if the door closes behind you? You will be trapped. There’s no guarantee you will make it out safely. Don’t be greedy and forget about that fridge,” she said and put an end to their discussion.

Sonu was not prepared to take ‘no’ for an answer. The next time he went in search of food, he observed the fridge from a dark corner.

In some time, the lady of the house opened the fridge and placed some food inside.

“No matter what the consequences, I am definitely getting inside that fridge. So what if it’s cold inside? I’ll jump out the moment the door opens,” he said to himself, fully prepared for the next time the fridge door opened.

He went home but didn’t share his plans with his mom. The next day, he found the perfect spot under the fridge and lay in wait. As soon as the door opened, Sonu quickly slipped inside and hid behind a bottle.

When the door was closed, Sonu realised that the fridge was a lot colder than he had imagined. But when he saw that the bowl of pudding in the fridge, he didn’t mind the cold that much. He gorged on all the pudding he could when he heard the humans talking.

“When will we come back?” asked the little girl.

“The movie is three hours long, so we should be back in four hours,” said the dad.

When he found out that nobody was going to open the fridge for the next four hours, Sonu began to panic.

Suddenly the fridge got a lot colder than it was before. He pushed hard and tried to open the door, but it wouldn’t budge. “Help me, help me!” he cried out, but his calls for help fell on deaf ears. Tears welled up in his eyes. “I should have listened to mummy’s warning,” he said to himself.

Meanwhile, Charu was getting worried. She hadn’t seen Sonu since that morning, and he was nowhere to be found. When she checked all his usual hangouts, she realised that he has probably tried entering the fridge and ran towards it.

She quickly ran to the house and nibbled off the fridge’s power cord. When the cord was cut, the power went out, and the blast of cold air stopped.

By the time the family came back, the fridge was no longer freezing cold, and Sonu had gained some of his strength back. When the door was opened, Sonu leapt out of the fridge. He gave the little girl quite a scare but escaped unharmed. Back at their burrow, Sonu apologised to his mother. “Please forgive me; I promise I will always listen to you.” Seeing her son safe and sound, Sonu’s mother gave him a tight hug.