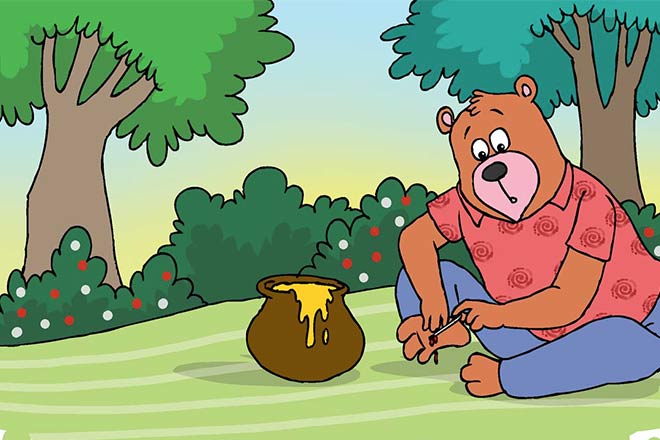 Blacky bear was returning home carrying a pot filled with honey.
Suddenly, a lot of thorns got stuck in his foot. He cried out in pain. He sat down and kept the honey pot on the side and started removing the thorns from
his feet.

“Why are there so many thorns on the path?” thought Blacky to himself.

After some time, when Blacky had removed all the thorns, he went to pick up his pot but saw that it had disappeared. It was no longer on the spot where he had kept it. He started searching for the pot everywhere but could not find it.

“What are you looking for?” said Teetu butterfly who was passing by.

“Someone stole my pot that was filled with honey,” said Blacky sadly. He explained what had happened to Teetu.

“Was your pot brown in colour?” asked Teetu curiously.

“Oh yes! How do you know?” asked Blacky surprised.

“While I was coming here, I saw Baddy fox running away with a brown pot,” Teetu replied.

“Oh, how dare he! I am going to teach him a lesson. But I don’t know how to find him,” said Blacky in dismay.

“Why don’t you ask Cheeku rabbit to help you? He is the best detective we have in Champakvan. He can surely help you,” suggested Teetu.

“Thank you for the idea Teetu, but I don’t think Cheeku will help me this time,” said Blacky, his face falling even more.

“Why do you say that?” asked Teetu, surprised.

“It so happened, a few days back there were some guests at Cheeku’s house.
They wanted to taste the honey from our forest. Cheeku came to me to ask for some honey but I refused to give it to him despite having some with me. Cheeku is upset with me since then,” Blacky told Teetu.

“What you did is wrong Blacky. A good neighbour should always help other neighbours in times of need,” said Teetu.

“I agree it was my mistake. I forgot we need each other in times of difficulties. Not sharing the honey was not good behaviour on my part. Now you tell me how I should patch up with Cheeku?” said Blacky who was feeling bad.

“I can help you if you promise to not behave so selfishly in future. I will talk to Cheeku and ask him to help,” said Teetu.

Blacky promised Teetu that he would be a better neighbour and Teetu and Blacky left to meet Cheeku.

Teetu explained everything to Cheeku and Blacky apologised. They both hugged each other. Blacky then told Cheeku what had happened to him.

“Was the pot filled with honey till the top?” Cheeku questioned.

“Yes, the pot was filled to the brim. Also, there was also no lid over it,” said Blacky.

”And Teetu said that she saw Baddy running with the pot on his shoulder. Teetu, which direction were you coming from?” Cheeku asked Teetu.

“I was coming from the west,” said Teetu.

“Hmmm… The Black Mountain forest is to the west. Baddy must be staying in that forest for some days,” Cheeku thought to himself.

“Each criminal leaves behind some clues that help us find them. Let us walk towards the Black Mountain and see if we can find anything,” Cheeku said to both of them.

After some time, they were standing on the way towards the Black Mountain.
Everyone knew that naughty thieves usually lived there. Even during the day, the way was quiet and empty.

“See, there are a few drops of honey on the ground. The honey must have spilled while Baddy was running,” said Cheeku pointing towards the drops on the ground. “This clue is enough for us to get to him.”

“How can a few drops of honey help us catch Baddy?” asked Blacky, confused.

“With the help of this robotic fly,” said Cheeku as he removed something from his pocket. “This fly has a sensor. It can smell the honey and find out if there is more of it in the area of 100 kilometres from here,” explained Cheeku with a smile.

“So, this robotic fly will reach exactly where Baddy has kept the honey pot,” said Teetu with excitement.

The robotic fly smelled the honey and flew away. Cheeku then took out his laptop and opened it. After some time they could see Baddy on the screen. He was enjoying the stolen honey along with his friends. “But I want to punish him and teach him a lesson,” said Blacky angrily.

“The police are there to teach him and his naughty friends a lesson. You should be happy, Blacky. You are getting your honey pot with some honey still left inside it,” explained Cheeku.

The police caught Baddy and his friends. Blacky shared the remaining honey with Teetu and Cheeku. He realised there is more happiness in sharing than having everything by himself.