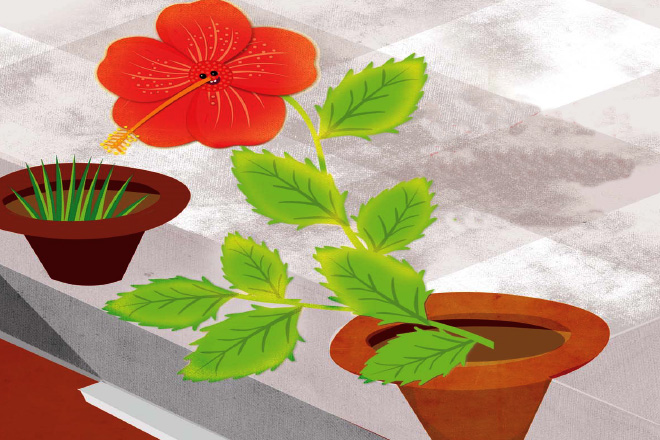 It was a sunny afternoon of the summer season. The Sun was out spreading its scorching heat all over the place. At the end of a quiet road was Asha Apartment. One of the flats there had a lot of plants on its balcony.

One of these plants was a Hibiscus plant was called Tinku. He was feeling tired and sleepy when it spotted another little Hibiscus plant at the end of the road below the apartment.

It called out to that plant and said, “When were you born? There was no plant here before.”

To this, the little plant said, “I am here since the last two months. You are situated at a height and thus, couldn’t see me at all.”

“Oh! I pity you so much,” said Tinku. “It is so hot, and in this climate, you are standing on the road tolerating the terrible heat of the sun. And there is not enough water in the soil too. How are you going to survive this summer?”

The plant replied, “These are my days of struggle. I am working really hard to spread my roots as much as possible in search of moisture. How are you doing my friend?”

“I am really happy here”, said Tinku “Since I am in a pot situated in the balcony, I do not have to face the dangerous heat of the sun. Also, my master and his family take care of me. They water me from time to time and also feed my soil with fertilisers for my better growth.”

Days passed by, and the two plants became friends. They used to keep chatting with each other regularly. Tinku named his new friend Rinku.

Tinku said, “Rinku, you are becoming weak day by day. Are you not getting enough moisture from the ground soil?”

Rinku replied in a sad tone, “No Tinku, the ground soil is drying very quickly and now I have to work all the more to spread my roots deeper in order to find some more moisture.”

The summer season eventually ended and the monsoon season arrived.

Rinku danced happily in the rain whereas Tinku couldn’t enjoy the monsoon showers as he was tethered to a pot in the balcony.

After some days, on one fine morning, the chatter of some women and kids on the road woke Tinku up. He looked down and was astonished to see that Rinku had grown really huge.

He was full of red colored beautiful flowers, and the women were plucking his flowers to make garlands and also to offer them in the temple.

He said to Rinku, “You have grown so big with so many flowers on you. And I am still the same. How did this all happen?”

More from Champak: Who’s the Prettiest of Them All?

Rinku replied, “I have worked very hard to set my roots deep in the soil to get water, even during the dry summer months.

During the monsoon season, my roots get water even more easily and help me to grow. I will keep going deeper into the ground, and in some years, I will grow into a big tree.

On the other hand, you have not faced any difficulty until now. You have become the slave of that pot. You never had to take pains to survive in the extreme weather conditions, and thus you are still the same, although you are ten years old now. And you will forever remain the same. If you do not take pains, you do not even gain anything.’ Tinku understood what Rinku had to say and started feeling sad about his own condition.

He wanted to grow like Rinku. All he could do now is hope day he would be able to break free from the pot and grow into a tree.