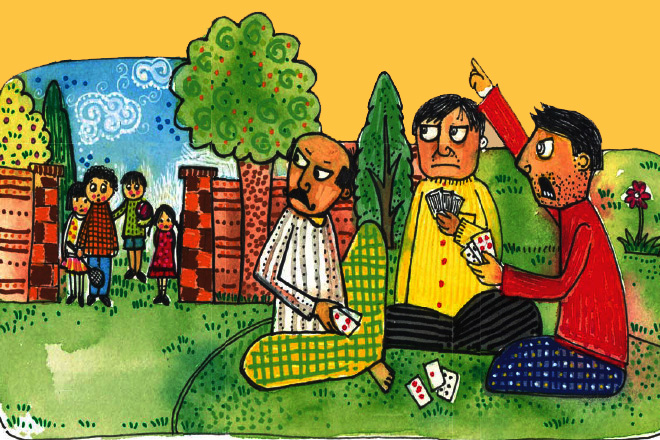 The first park was used by Jimmy who had set up a gym there. Every morning, he and many other people would exercise at the park. Jimmy earned a lot of money from his clients.

When the children told him that they wanted to play inside the park, he replied, “What is the use of playing? If you want to stay fit, join my gym.”

“But uncle, this is a public park. It is meant to be used by everyone. You should set up your gym somewhere else,” said the children.

Jimmy got angry at their comments and turned them away.

The second park was used by Raju and his friends. They would sit there the whole day and play cards. They did not allow the children to come into the park. When the children tried to reason with him, Raju would shout at them and shoo them away.

The third park was used by a political party for their meetings. They locked the gate when they did not use it so that no one could go inside. The children tried talking to the party secretary, Manish but he paid them no heed.

“Manish uncle, please let us use the park. We want to play,” the children requested.

“We have an important meeting coming up. I have no time for your silly pleas. Go away!” replied Manish.

Rahul, Nayan, Riya and Nina decided to do something about the problem. They held a secret meeting.

“We will have to stop them from using the parks,” said Riya.

“But what can we do? No one listens to us,” said Nayan.

“How about we publish a newspaper?” suggested Rahul. “That’s a good idea! We can report the news and let others in the colony know about this,” said Nina.

“Exactly! We will have to write, print and distribute it ourselves,” said Rahul.

“But where do we get the money for all this?” asked Riya.

“We will collect money from all the children in the colony. We will do some chores at home and earn extra pocket money as well,” explained Rahul.

Everyone liked the idea. They formed a team and divided their work. Nayan and Nina went around collecting money and Rahul and Riya prepared the content for the newspaper. Nina and Riya then got the newspapers printed.

Early in the morning on a Sunday, the children went around delivering the newspaper at everyone’s doorstep.

When the people opened their doors to collect the daily paper, they were surprised to find an extra newspaper. The newspaper had essays, sketches, and poems by the children of the colony—everyone loved it! There was even an article about how the parks were taken over by Manish, Jimmy and Raju and how others were not allowed to use the parks.

Slowly, the residents of Akash colony understood that they too had the right to use these parks, and especially the children who had no other open space to play in. The children had made them understand that public spaces such as these parks belonged to everyone. The children’s newspaper became popular and the residents soon began looking forward to each week’s issue.

The residents stopped using Jimmy’s gym due to which he had to shut it down. The Mayor of the town came to know about the issue and immediately took action against Jimmy, Raju and Manish, who were banned from using the parks. The parks were now free to be used by everyone. People began enjoying going to the park again. The Mayor appreciated the efforts of Rahul, Nayan, Riya and Nina for solving the problem in a novel way.