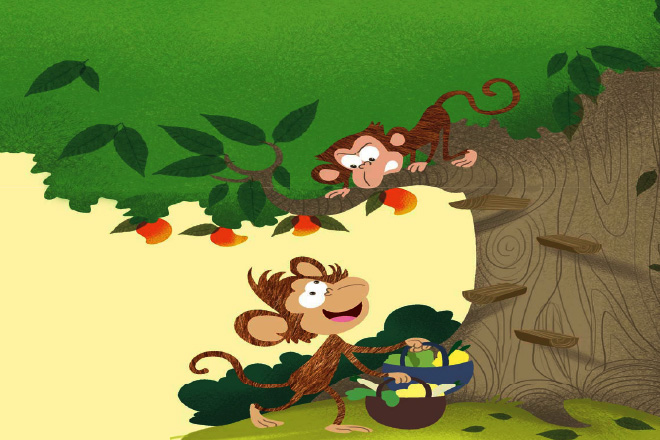 Tinku, the monkey lived with his wife and daughter atop a mango tree in Samratvan. Tinku was a spendthrift. He would uselessly spend his money here and there, and when his money got over, he would borrow from his friends.

His wife, Jenny, would often be worried about him. She said, “Spending without thinking is not good. We need to save something for the future.”

But Tinku wouldn’t pay any attention to that.

One day, he got back home with lots of vegetables. Jenny asked, “What is the point of buying so many vegetables when there are just three people at home?”

“I don’t like going to the market every day, so I got everything at one go,” Tinku said.

“But the market is not far away. You’re spending a lot instead of saving, which will help you during tough times,” Jenny argued.

“All right, all right. Stop giving me advice. I know what I’m doing,” Tinku said to Jenny.

Jenny, however, was smart. She would try to save a bit of money every day.

One day, on a sunny afternoon, Tinku was walking back home along with Mitku, the rabbit. Tinku decided to eat an ice cream on his way but ended up buying 10 ice creams at one go.

“Isn’t it great to be able to enjoy an ice cream in this heat?” Tinku said looking at Mitku.

Mitku asked, “That’s fine, but why did you have to buy so many of them?”

“I am not a miser like you. Money is for enjoying life,” Tinku said.

And by the time, Tinku reached home, the ice creams had melted. Jenny was angry. She said, “We will be on the road one day for this habit of yours.”

So what if the ice creams melted? I will get more,” Tinku said carelessly.

One day, Tini, Tinku’s daughter, was playing on the tree. She suddenly slipped and fell off.

Tini was taken to Nino, the bear’s nursing home where Tinku was informed that she has to go through an operation immediately. “You will have to deposit Rs.2,000,” Nino said. Tinku was shocked. “Yes, that is the admission charge. You will have to pay more after the operation is done, but she needs to be operated soon,” Nino said.

“Doctor, I don’t have the money right now. But please start the procedure. I will arrange for it,” Tinku pleaded.

More From Champak: A Tip For Not Getting Lost

“All right,” Nino said. Mitku told Tinku to borrow money from his friends. “I had already borrowed money. I don’t think I’ll get any more from anyone,” a worried Tinku said. At that moment, Jenny said, “Don’t worry, I had saved up some money that might help.” Tinku was surprised.

Jenny came home and counted the amount of money she had. She had almost saved up Rs.3,000. Later, they deposited the money in the hospital. Tini’s operation was a success and she was fine in two days.

This incident changed Tinku. He said to Jenny, “I now understand that it is really important to save up. I will not spend uselessly anymore. I promise.”