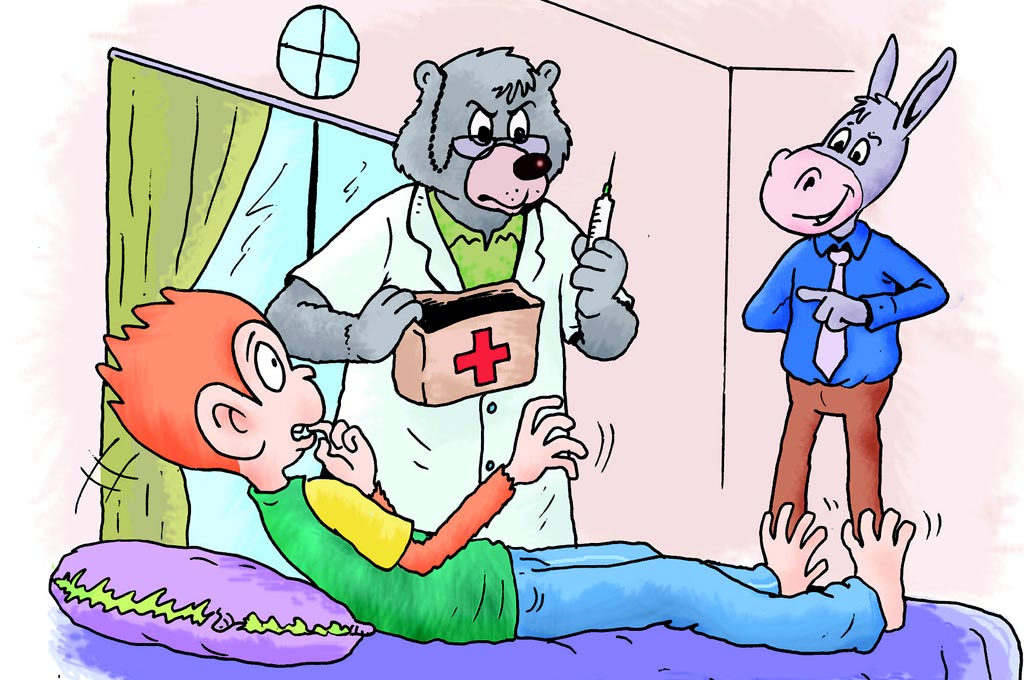 Milo, the monkey was very cunning. He enjoyed taking away things from others.

One day, he chanced upon Freddy, the donkey. Freddy had recently shifted to Sundervan. As he was new, he did not know about Milo’s cunningness.

“Namaste Freddy! How are you?” Milo said with a loving voice, so Freddy greeted him with a smile too.

“I just came here to tell you to be careful in this forest. I will take your leave now,” said Milo and he started to leave.

Now Freddy became very restless.  He stopped Milo and asked, “What do you mean?”

“I cannot tell you about it out here,” said Milo after checking both sides for onlookers.

“Ok. Please come inside. Let’s have tea and snacks, and talk,” said Freddy as took Milo to his house.

Taking sips of tea, Milo said, “It’s not a good idea to make friends with anyone in this part of the forest. They are all selfish. They spread false rumours about each other.”

Listening to Milo, Freddy got cautious. He started believing trusting Milo’s words. In the beginning, Milo would come only once a week to meet him, but slowly he started coming over every day. Freddy was a kind person and he believed everything that Milo said.

But Milo had not changed his nature.

One day when Freddy was about to leave for work, he was surprised to see Milo at his doorstep.

“Oh! Milo, you’re here at this hour? Do you have some important work?

“Freddy, actually there is no water in my house. I thought I might take a bath at your place.”

“Ok, I am leaving for my office. You can take a bath. I will take the keys from you later.”

Freddy handed over the responsibility of his house to Milo and left. Now Milo was free to have fun. After taking a bath he comfortably lay down on the sofa and started to eat his breakfast. He took out all of the food and drinks from Freddy’s freezer and tasted them. When Freddy returned in the evening, he was surprised to see Milo in his house.

“What happened Milo? Are you feeling well?” he asked.

“Actually, I felt so dizzy that I could not get up from the sofa,” said Milo holding his head. “Now that you have come back home, I will leave for my house,” said Milo as he got up and reached for the door stumbling.

Just then Freddy stopped him and said, “Are you crazy? Stay here tonight. You can leave tomorrow morning.”

Freddy forgot about his exhaustion and started taking care of Milo.

The next day, Milo kept sleeping till late in the morning.

“How are you feeling now?” Freddy asked Milo.

Freddy was concerned.  “I’ll take a leave from work and stay with you at home,” said Freddy and started to call his boss.

“Oh Freddy! Why would you go through all that trouble? I’ll be fine. You should go to work. I will return to my house anyway. Can you just get me some juice before you leave?” said Milo slowly.

He did not want Freddy to stay back at home or else he would not be able to eat his favourite food or watch his favourite TV channel.

“Ok!” said Freddy and before leaving for his office, he went to buy juice from Meera, the mouse.

“What happened Freddy? You always buy curd. Why are you taking juice today?” asked Meera casually.

“Milo is not feeling well. I am taking this juice for him.”

Hearing Milo’s name Meera replies angrily, “Don’t talk about him. He is a very cunning liar.”

Listening to Meera say this Freddy got very angry. “Meera! How can you say these things about my friend?”

Meera was baffled at Freddy’s loyalty and said, “Okay, tell me the whole incident.”

Freddy then told her everything that had happened until now.

Meera understood that Milo was fooling around again. She explained, “Look Freddy, you need to be careful. Have any of your belongings disappeared? Just confirm that. If you find something missing then understand that Milo is fooling you.”

After buying the juice, Freddy returned back home. He gave the juice to Milo and checked the refrigerator.  He saw that the stored food was missing, so he became very alert. He thought of something, looked at Milo and said, “I am leaving for work. It will be very late before I return. Take care of yourself.”

“You don’t need to worry. I will return to my house soon,” said Milo.

Now Freddy left his house and went around to the back. There was a small window from where he could easily see what’s happening inside the room. He saw that Milo immediately got out of the bed, switched on the TV, took out some ice cream and juice from the refrigerator and started to eat.

“Now I understand what he was up to,” said Freddy.

Freddy was very angry at Milo. He immediately called his friend Dani, the bear who was a doctor and asked him to come to his house. Soon after, he entered the house with Dani.

Seeing Freddy and Dani in front of him suddenly, Milo got confused.

“I was not feeling too well so I was watching TV. But why did you come back so early?”

“I thought that we should get you treated by Doctor Dani,” said Freddy as he gestured.

Dani immediately made Milo lie on the bed and started to examine him.

“Oh! His health does not look too good. He needs an injection quickly,” said Dani. He took out an injection from his briefcase.

“After taking this injection, you will have to get admitted in my hospital. You treatment will go on for a week. Then you will be perfectly alright. Now give me my fees of 500 rupees”

Listening to Dani, Freddy immediately took out and gave a 500 rupees note from Milo’s jeans.

“What did you do? Why are you giving my money away?” said Milo protesting.

“Milo, you shouldn’t get angry. If you are alive, you can earn a lot of money.” said Freddy. “I will get you admitted in the hospital. At the most it will cost you 3-4 lakhs. But your health will be perfectly alright.”

Listening to this, Milo started to shiver. He understood that his actions had been exposed. Immediately, he began to run away.