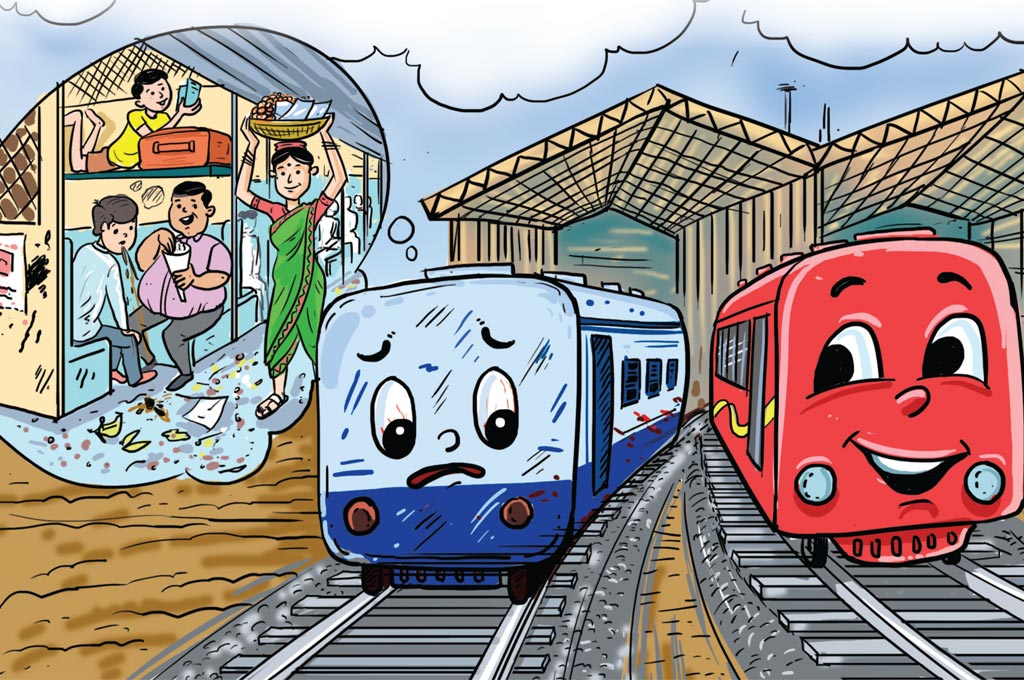 The station master blew his whistle. The train was about to start. People rushed to board the new coach attached to the end of the train. Seeing the crowd, the new coach got scared.

The new coach had comfortable seats, clean curtains, high-speed fans, and LED bulbs. The windows, flooring, and ceiling were newly designed. It had internet connectivity as well!

The engineer looked at the new coach and said, “Your strength will be put to test today.”

The train chugged along and it stopped at many stations on its way. More passengers preferred to board the new coach and soon, it was full.

When more people tried to enter the new coach, it screamed at them.

“Hey stop! There’s not enough room for everyone! Why don’t you go and sit in the older coaches?” it said.

But none of them listened to it.

“Wow! You look beautiful,” said an old coach next to the new coach in one of the stations.

“I know I am! But you are so dirty!” said the new coach, making a face.

“I didn’t choose to be dirty. It’s the passengers who made me dirty. If they stop throwing trash and instead treat me like they do their homes, I too would have looked bright and clean,” said the old coach.

“You are just making up excuses,” said the new coach arrogantly.

Just then it saw a passenger blow his nose and wipe his dirty hand on the window. The new coach became angry.

“Hey, you! Stop making me dirty!” it shouted.

But the passenger didn’t listen. It then understood what the old coach had said was true.

“You are right! It is people who make us dirty,” it agreed.

The old coach was very happy that the new coach understood its problem.

“I am being taken for a wash today. But even after that, I will not become as beautiful and clean as you,” said the old coach.

When it was time to leave again, many passengers crowded the new coach.

The new coach was so angry that it refused to move. The passengers and the engineer wondered what was wrong.

“Please don’t do this,” warned the old coach.

“Why shouldn’t I?” asked new coach stubbornly. “It is not my responsibility to carry so many people. I will only take 50 people otherwise, I refuse to move. I will not take anyone beyond my capacity,” said the new coach.

The old coach tried to make the new one understand but it refused to listen. The engineer checked the new coach and found nothing wrong with it. He was puzzled.

He then finally said, “This coach cannot be used anymore. We’ll have to take it to the shed where the other useless coaches are kept.”

At the shed, the new coach was happy. But its happiness was short-lived. It was gathering dust and its metal frame was beginning to rust as it lay on the tracks unused.

The new coach waved to the other trains that passed by pleading them to stop.

“Please take me along,” it would cry.

The old coaches would respond saying, “Sorry but we cannot take you along with us. You are new, but you are not able or ready to take the load that we carry.”

“The old coach was right. Now, I’m doomed to spend the rest of my life in this shed without being used or cared for,” the new coach thought to itself.

A few days later, the new coach saw a flurry of activity. It was fastened with ropes and lifted from the shed by a crane. When the new coach learnt that it was being taken to the workshop to be fixed and used again, it became elated.

This time, the new coach resolved to work without a protest.