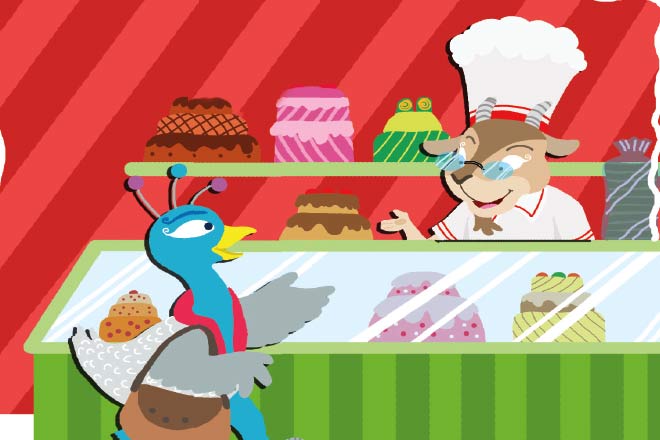 Mayuri Peahen was a reporter at Jungle Times. When she reached her office, editor Jerry Pigeon told her, “The next edition of Jungle Times is a ‘food special. The magazine is going to be finalised tomorrow. Two pages are still empty. Prepare a nice article to fill them.”

Mayuri thought for a while. Unfortunately, no idea clicked in her mind. She couldn’t think of a topic to write on. Soon, it was lunchtime. She hadn’t brought a packed lunch. So, she left the office to get something to eat. She felt a sudden urge to eat bread.

She went to a bakery and asked for bread. The bakery owner Yaku Billy Goat asked, “Which type of bread you want, brown or white?”

“Bread generally has two colours. However, there is a wide variety of bread,” replied Yaku. “Okay, what is the difference between white and brown bread?” Mayuri asked with curiosity.

“White bread is made from refined flour while brown bread is made using whole wheat,” explained Yaku. Mayuri thought, “This bakery owner knows a lot about bread. I can get a lot of information from him. Then I will be able to write an article on bread for the magazine.”

Mayuri said, “Uncle, I am a reporter at Jungle Times. Could you please give me more information about bread? I can use it to write an article.”

He replied, “Why not? Not only bread, I know a lot about every item sold in a bakery.”

“For the time being, please tell me about bread,” said Mayuri.

She took out her pen and diary. She started taking notes.

Mayuri interrupted him saying, “You have already told me this. Tell me, when was bread made for the first time?”

“Wow. Tell me more…” Mayuri prompted. He continued, “At that time, the dough was made from flour obtained from different grains. It was roasted on flat stones placed over the fire. In the 18th century, bread was made in the home and the hearth.”

She asked, “Is bread similar all over the world?”

He replied, “No, bread has different shapes and sizes.”

He said, “In America, bread is often made from maize flour. In Hong Kong, Japan, Singapore and Malaysia, it is generally made from rice flour. Germany adds sesame seeds, pistachios and cashew nuts to its bread. Iran and Mongolia make thick, round bread.”

She asked, “Are there other kinds of bread apart from these?”

He continued, “Yes, Africa produces bread made in hot oil. China makes bread that is slightly sour in taste and is steamed.

Germany makes salted bread. Israel makes bread that is both sweet and sour in taste. In India, white and brown bread are consumed the most.” “Seventy per cent of the countries of the world enjoy eating bread. Fifty per cent of the bread made is used to make sandwiches. Apart from this, it is also used in patties, burgers, hot dogs and as a cereal with vegetables,” Yaku replied.

She asked, “Is there any country that makes all types of bread?”

“Switzerland is a country where the bread of all countries are made and sold. Britain makes more than two hundred varieties of bread, all of which taste good.”

“This is my final question. Does bread have any nutrition?” asked Mayuri.

“Bread has protein, carbohydrates, calcium, iron and vitamins that are essential for the body. Bread made from refined flour doesn’t have fibre. It contains a lesser amount of vitamins and minerals. So, it is better to eat brown bread.”

Mayuri kept her pen and diary back in her bag. She thanked Yaku for giving her so much information about bread. She went back to the office. She began to write an article on bread.