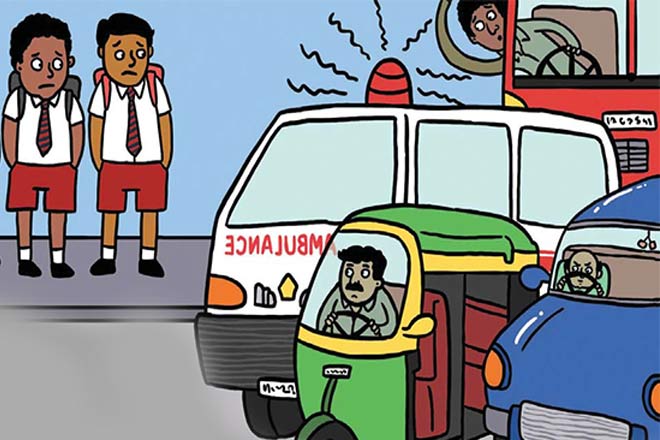 Raju and his friends were on their way home from school when they heard a siren. They turned around and saw an ambulance. Raju felt bad for the patient inside.

A man got down from the ambulance and requested the other vehicles to give way but the cars were standing back-to-back. There was no place for the ambulance to move.

Raju and his friends were watching this incident. Raju noticed that the traffic jam was too long and was not going to clear that easily.

Raju ran forward to find out the reason for the traffic jam. He saw a big crowd and everyone was shouting slogans. Raju asked, “What’s happening?”

“We are on a strike because the government is not fulfilling our wishes,” someone replied to Raju.

Raju asked, “Would it not be better for you to be heard in a place where you are not blocking the entire road and creating problems for others?”

The man said, “If we don’t block the road, no one will hear us.”

Raju asked, “What’s that even supposed to mean?”

The man said, “Hey kid! If the traffic gets blocked, only then the government listens to us.” He started his sloganeering again.

Raju pleaded, “There is an ambulance at the back which has been waiting for a long time and the patient is in a critical condition. The patient has to be taken to the hospital as soon as possible. Could you please make way for it?”

The man said, “You go from here. We will leave only when our wishes are heard.”

Raju understood that the crowd was not going to move. He knew something else had to be done to make sure that the ambulance reached the hospital on time so that a life could be saved.

Raju called his friends and said, “Come, let’s do something.”

Raju said to the other drivers, “Please move your vehicles a little so that the ambulance can go near the divider.”

Raju and his friends took the traffic boards and created a ramp for the ambulance to cross the divider and cross over to the other side of the road. On the other side, cars were moving slowly. Raju and his friends signalled the cars to leave a place in the middle of the road for the ambulance to move.

The man from the ambulance thanked Raju and said, “My son’s life will be saved because of all of you.”

Raju thanked his friends and everybody went to their respective homes. They were happy to have saved someone’s life.

be compassionate, help others, help the needy, kind, kindness