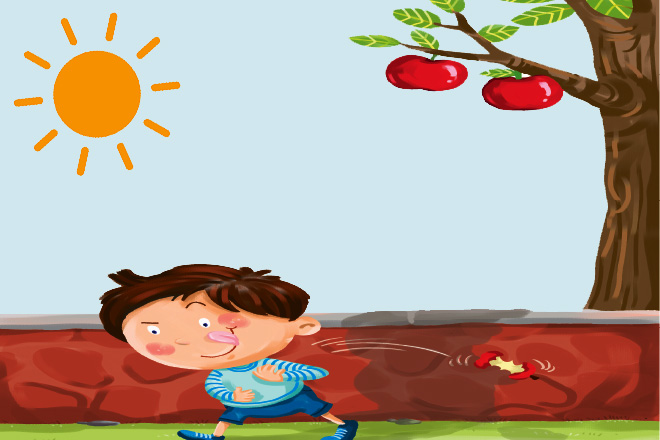 By the time the fall season came, there were only three apples left, waiting for someone to pluck them. When the wind blew, the tree sang, “We are apples three, anyone who uses one, shall a treasure see!”

One morning, as Gaurav was passing, he saw the tree with the apples and wanted to taste one. Just then, the wind sang through the leaves, and a plump, an apple fell to the ground!

Gaurav picked up the sweet fruit, took a great bite and threw the core away. The wind in the apple tree sang, sorrowfully, after him: “Here in the orchard are apples two, but gone is the treasure that fell for you.” The next day, Heena too came down the lane that passed by the orchard wall. She saw the two beautiful apples that hung on the branch.

She heard the wind sing in the branches, “We are apples two, a treasure they hold for you.”

With a plonk, an apple fell down. Heena picked it up and held it carefully. She thought it was a pity to eat it and decided to keep the apple instead and left.

No Pain, No Gain

The wind sang after her, “Only one apple where once there were two. Gone is the treasure I gave to you.” When she reached home, she hid the apple in her drawer and, after many days, it spoiled.

On the third day, Rudra too went down the lane and spotted the last apple. The wind in the tree also sang to him, “On the apple tree, a wonderful treasure, hanging, just see!” Suddenly, the wind blew harder and down fell the last apple.

Rudra took his jack-knife out and cut it in half. Inside, he could see the small black seeds. He carefully took out all the seeds and climbed over the orchard wall, holding them in his hand.

More From Champak: THE GOODNESS OF CACTUS

The earth in the orchard was still soft, for the frost had not yet come. Rudra made holes in the earth and in each hole, he dropped an apple seed. Then he covered up the seeds and climbed back over the wall to eat his apple.

As he walked down the lane, the orchard wind followed him, singing to him from every tree and bush, “A planted seed is a treasure won. The work of the apple is now well done.”