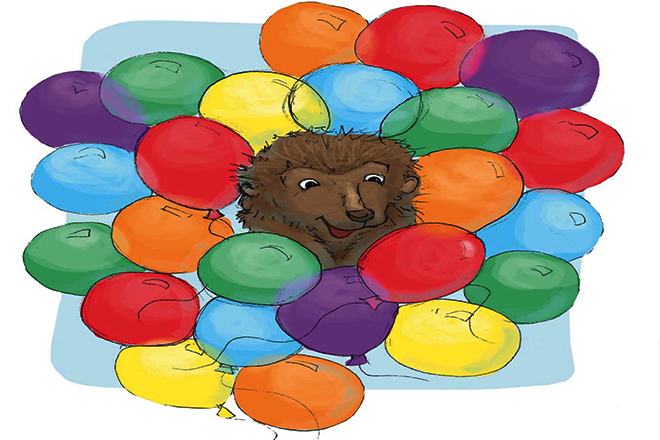 Once upon a time there was a day. It was neither a very good day nor a very bad day. It was just a very boring day. All boring days have a peculiar smell. Pickly Wibble the hedgehog smelt that boring day the moment he opened his left eye to take a peek at the alarm clock. Oh no! Time to get up!

Pickly Wibble the hedgehog decided that the best way to spend such a boring day was to stay carefully rolled up below his red maple leaves nibbling away at blueberries. After calling the office faking a back strain, Pickly Wibble dozed for a couple of hours more. Then hunger woke him up and feeling famished he went into the kitchen to munch on something. But oops, the fridge was empty! There was not even a berry!

Pickly Wibble could not go shopping! Some colleagues of his would see him around and realize his back strain was a fake.

So he decided to order something yummy via the Internet. But oops his computer had crashed the day before and Pickly Wibble had taken it to get it fixed at the computer shop just around the corner. He could not go out to pick it up. He was supposed to be sick!

So Pickly Wibble decided to take a shower to soothe both his ravenous hunger and ruffled spines. Pickly Wibble used the bath foam first, then the shampoo and lastly the conditioner.

When it was time to rinse, oops, not even a drop of water fell from the tap. With his eyes full of suds Pickly Wibble tried to reach the phone on the desk of the dining room to call the plumber, Cater the Pillar. Stumbling a couple of times and slamming against a little desk, a lamp and even a sofa, Pickly Wibble the hedgehog was able to reach the phone and dial the number, but oops, the line of Cater the Pillar, the plumber was continuously busy.

Pickly Wibble the hedgehog thought that on a boring day like that maybe Cater the Pillar the plumber too had called in sick. Mhmmm!

Pickly Wibble took a decision! He would watch the TV waiting for the sun to set. In the dark, wearing a trench and dark glasses he could slip out of the house to buy something good to eat at Daisy the wasp’s.

After taking the decision, he took the remote control and started pressing the buttons at first gently, then with more strength and increasing energy. Oops, it did not work!

It was the battery for sure. Pickly Wibble the hedgehog was trying to remember where he had put a new one when someone knocked at the door.

He looked out from the peep hole and oops, outside there was a crowd waiting for him. His colleagues were the first, then he saw his friends, his parents, Cater the Pillar the plumber, Daisy the wasp carrying a basket with fresh blueberries and his broken personal computer. Pickly Wibble the hedgehog heaved a sigh and opened the door. Whilst he expected long faces and admonishment, to his surprise he heard the crowd saying:

“We knew you would find an excuse not to show up!”

“Many happy returns of the day, my son!”

How could he forget! That boring day, was his birthday! He forgot, but the others, the ones who cared for him truly did not, and they came to celebrate at his place!

And so it happened that on a boring day Pickly Wibble the hedgehog learnt that ordinary days could also be special days, especially those days which were also his birthdays!