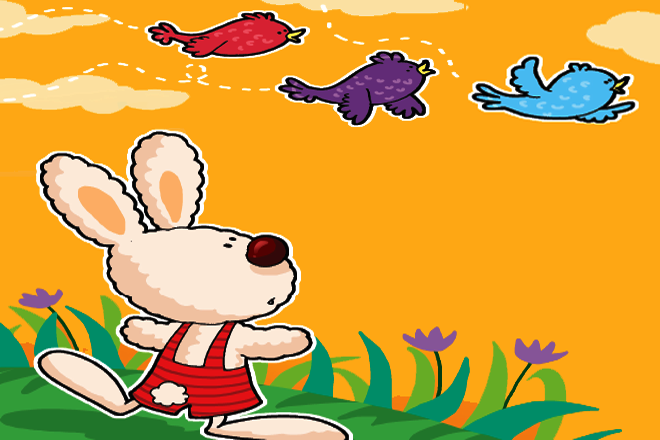 Terry the Rabbit was very upset. He felt that he was inferior. He looked at the flying sparrows and thought, “These Sparrows are so lucky. How I wish I could fly like them! They can fly to places. They don’t even have to walk to school like me. I become tired by the time I reach school. I wish I could get wings somehow so that even I can fly.”

One day Terry was playing near the bank of a river. He happened to look around and found two feathers of a pigeon. Terry looked at them and felt immensely happy. He picked them up and brought them home. He carefully stuck the feathers onto his back using glue. Then he walked to the garden. Daisy the Sparrow was sitting on the branch of a Mango tree. Terry called out to her and said, “Daisy, now even I can fly like you.”

He tried to fly by fluttering the feathers, and with a thud he fell on the ground. Daisy burst out laughing. She said, “Terry, one can’t fly just by attaching two feathers.”

Terry got up and said, “Let’s bet on this. What would you give me if I start flying within a month?”

“Oh forget it!” said Daisy, “You shall never win the bet.” “I will surely be able to fly within a month. I can vouch for that,” replied Terry.

“Well, if you win the bet, then I shall become your servant for a month,” said Daisy with a confident grin.

Terry agreed to the condition and walked away. He reached home thinking of ways to start flying. He spent a sleepless night thinking about the same thing; however, he couldn’t come up with a solution.

The next day he went to school. His science teacher Sammy, the Deer was talking about the year 1930, in which a balloon was made to fly by filling it with helium gas. He also mentioned that it was after this that the Wright brothers invented the aeroplane.

Terry got inspired by this and started thinking on the same lines. He went to the market and bought a big, transparent balloon and got it filled with helium. The moment it was filled with helium it rose up in the air. Terry held one end of the string in his hand and started flying off with the balloon. The birds who were flying at that time noticed this, and Daisy saw it too. They flew closer to Terry and were thrilled to see him flying. Daisy shouted out to Terry, “You have won the bet. You can come down to the ground now.” Terry was unable to come down as the balloon was going higher up in the air. He was thoroughly enjoying the flight. Moreover, he was afraid that the birds and animals would see the balloon if he came down. After a while, the gas from the balloon started depleting and Terry fell on the ground with a thud. He was bruised badly during the fall. Everyone saw the balloon lying beside Terry. Daisy said, “You deserved this because you tried to win the bet through unfair means.”

Teacher Sammy said, “Terry, nature has made everyone unique. Just like some birds cannot walk or run like us; similarly we too cannot fly like them. Therefore it is foolish to imitate anyone. Now let us all take Terry to the doctor.”

Terry had learnt a lesson. He apologized to Daisy and acknowledged the lesson learnt.