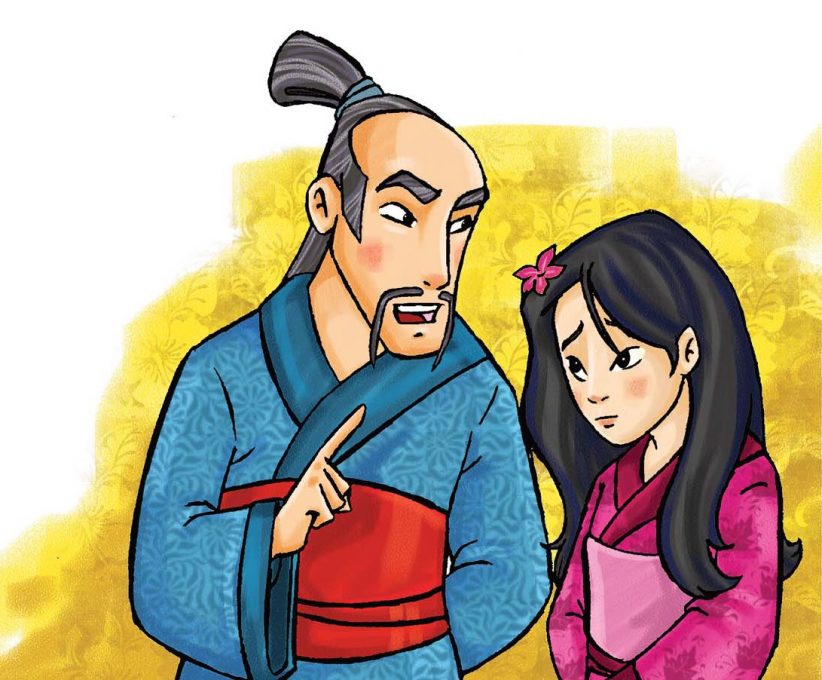 Many years ago, there lived a wealthy minister in China. He had a young daughter whose name was Fu Ya. Fu Ya was a beautiful and intelligent girl. She loved and respected her father very much. The minister loved his daughter too and always wanted the best for her.

When Fu Ya grew up, the minister started looking for an eligible groom for her to marry. The minister wanted his son-in-law to be an affluent man so that his daughter could lead the comfortable life she was used to, even after marriage. He shortlisted many wealthy young men and asked Fu Ya to select one of them.

But to his great disappointment, Fu Ya refused to marry any of the young men her father had selected. The reason was that Fu Ya wanted to marry a young man named Chin Lee.

Chin Lee was a bright and intelligent fellow. He was hard-working, friendly and pleasant natured too. But he belonged to a family that wasn’t very wealthy.

When Fu Ya told her father about Chin Lee, the minister grew unhappy. “Fu Ya, my dear child,” he said. “You will not be happy if you marry a man who isn’t wealthy like us. He has a small house and he won’t be able to give you a comfortable life.”

The minister wasn’t convinced. He thought differently but at the same time, didn’t want to see his only daughter unhappy.

The minister thought for a long time and then said, “Alright, Fu Ya. Let me see if Chin Lee is as bright and intelligent as you say. If he brings me the two gifts that I ask for, I will willingly give my consent to your marriage and accept him as my son-in-law.”

“What is it that you want Chin Lee to bring you?” Fu Ya asked in a soft voice.

The minister replied, “Go and tell Chin Lee that I want him to bring me two things as gifts: fire and air. But also tell him that I don’t want them as they are. I want them both to be brought to me wrapped inside the paper.”

Fu Ya was shocked. “Fire and air inside a paper? That sounds impossible!” she said. “Father, how can anyone wrap fire in the paper? The paper will surely burn! And how can anyone bring air in paper too?”

“Well, Fu Ya,” the minister said. “If Chin Lee is as bright and intelligent as you say, he will surely know what to do. If he doesn’t bring me these gifts, you will have to bid him farewell and marry a man of my choice.”

That evening, Fu Ya went to convey her father’s odd request to Chin Lee.

Chin Lee listened calmly. He thought for a long while and then said, “Don’t worry, Fu Ya. Go back to your father and ask him to give me a day’s time. I will bring him the gifts as soon as I can.”

The minister readily gave Chin Lee a day though he doubted his capabilities.

The next evening, the minister saw a young man walk into his house. He was carrying a lantern made of coloured paper. There was a small candle lit inside the lantern.

“I’m Chin Lee,” Chin Lee said and bowed respectfully. “I have brought what you asked for. Here’s fire inside paper, just as you asked for.”

The minister nodded and took the lantern from Chin Lee.

“What about the other gift I asked for?” he then asked.

Chin Lee promptly took a fan made of paper from his pocket. He spread it open and began fanning the minister with it.

More From Champak: The Wise King

“Here’s air in the paper!” he smiled and said. “Your other gift!”

The minister laughed and put his arm around Chin Lee. He was very happy. He realised that Chin Lee was the best suitor his daughter could ever have. He immediately called Fu Ya and gave her hand in Chin Lee’s. “You have my consent for your marriage,” the minister then said.

Fu Ya and Chin Lee were married the following week.