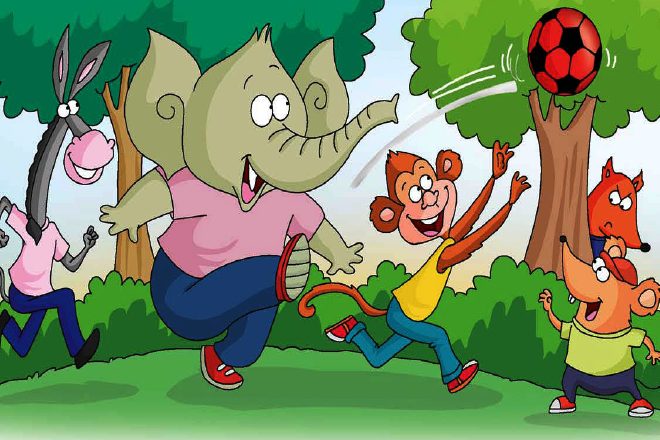 In the forest of Champakvan, Jumpy, the monkey, Damru, the donkey, Jumbo, the elephant and Meeku, the mouse lived in peace and harmony. They played together, studied together and were the best of friends.

Another animal who had made Champakvan his home was Baddy, the fox. He hated the friendship the other animals had between them and was always trying to break them up. He was jealous of their friendship and deep down inside wanted to be their friend too.

One morning, as he was reading the papers, Baddy got an idea. It was the perfect plan to break up Jumpy and the others. As he looked up from his paper, he saw that Jumbo happened to be out on one of his walks. Baddy put on his running shoes and ran up to him.

He made some small talk with him, asking him about the weather and how his parents were doing before jumping into his plan. “You know what? Meeku said something the other day and I really felt bad for you,” said Baddy.

“He said that the animals of Champakvan were dumb and the only reason they’re together was because it would take their collective brain powers to get things done. He also said that you were the dumbest among all the animals,” said Baddy.

Jumbo turned red with rage. “If he thinks he’s so smart, why does he ask me to help him with all the heavy lifting? Why doesn’t he do it himself?” Jumbo said and stormed off. Baddy was ecstatic. His plan was finally working. But, he wasn’t done yet and decided to meet a few of the other animals. He next went to Jumpy’s house and met him as he came back from school.

“Congratulations, Jumpy. heard that you came first in class. Damru seems to be quite the tutor,” said Baddy. “Really? Well in that case you should also know that he told me that if it wasn’t for him you would have barely passed and that you’re as dumb as a stump,said Baddy.

“That’s no good donkey! If it wasn’t for me and all the notes I share with him, he wouldn’t have passed. And to think, he’s got the gall to say such things about me!” said Jumpy and stormed into his house.

Baddy had never been happier. His plan was working perfectly and soon, none of the animals were speaking anymore.

Seeing that the animals of Champakvan were no longer friends anymore, the king, Shersingh, grew worried. He called his minister, Cheeku, the rabbit, and asked him to find a solution to this problem.

Cheeku was very bright and he immediately spoke to each and every animals of the forest individually. Through his interviews he learnt their reason for not being friendly and also learnt that Baddy has been behind all this.

Cheeku then came up with the perfect plan to get the animals of the forest back together. He announced that there would be a competition and all the animals were to participate. The competition would involve various activities, for which the winner would be awarded points.

The animal with the most number of points would be the winner.

All the animals of the forest readily participated. After all, they had to prove to the others that they were better.

The activities kicked off and the first was a tree climbing event. The first one to climb up a tree and back down would be the winner. Jumpy quickly completed the activity and was announced the winner.

The next activity involved moving a huge boulder, which Jumbo won with ease. The other activities were won, one by one, by a different animal. Soon, the event was over the it was time to announce the winner.

Cheeku announced that all the animals had been awarded the same number of points because they had each won a event that they were each good at. The animals realised that they were all equal. Each person had something of worth and each person is important and special in their own way.

Cheeku said, “It is to get you all to understand this point that I organised this competition.

Friends, I also know why you have been fighting all this while. Someone has been saying mean things about you behind your backs to others and creating rifts between you.”

As Cheeku was about to point to him, Baddy decided to slip away unnoticed. Unfortunately for him, Cheeku stopped him and asked him to admit that he was the one behind the fights or face Shersingh’s punishment. Fearing being sent to jail, Baddy confessed and apologized to all the animals for trying to break them up. He promised not to do it again and promised to always help.

Cheeku realized that the reason Baddy did all this was because he had no close friends of his own, and he felt angry towards the other animals. In the contest, everyone had seen how good Baddy was at running, and soon, some other animals wanted to be his friend as well.

Thus, with Cheeku’s intelligence, the whole forest was back together again, and they even forgave Baddy and included him in their group.