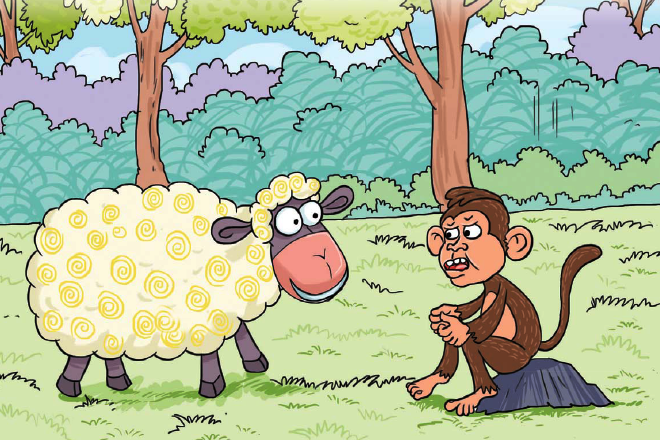 Sunny was a rich sheep who owned several farms. Everyone in the forest was in awe of his wealth. Some were even jealous of his success.

One night, when Sunny was on his way home, he saw a monkey tired and shivering in the cold.

When Sunny enquired about him, the monkey replied, “My name is Monty. I belong to the neighbouring jungle.

My home was destroyed in a forest fire. I managed to escape and arrived here. I would be grateful if you could give me a place to sleep tonight. I will leave first thing in the morning,” said Monty.

“Don’t worry. You can stay with me in my farm,” said Sunny

Sunny took Monty to his farm and served him dinner. Monty ate happily and went to bed.

When Sunny woke up the next morning, he was surprised to see all the chores done—the hedge was trimmed, the weeds were removed and the crops were watered. He realised that it was Monty who had done it all.

“Good morning, Sunny,” Monty greeted him cheerfully. “Thank you for allowing me to sleep in your farm. I will leave now.”

“No, wait!” Sunny stopped him. “Where will you go? Do you have friends or relatives here? It will be a while until your forest grows back.”

“No, I don’t know anyone here. But I will figure out something. I will find a job and then rent a place,” said Monty.

“If that’s the case, why don’t you work with me? I need someone to help me manage my farms. And you can stay at my farm,” said Sunny.

Monty was elated! He immediately agreed. That day on, Monty started to work at Sunny’s farm.

One evening, as Monty was returning from the farm, he heard someone call out to him. It was Ray, the rhino.

“Hey, Monty! We hardly see you around,” said Ray.

“That’s because the work at the farm is keeping me busy,” said Monty.

“You, poor thing. You work so hard and yet Sunny does not trust you,” said Ray.

“Why do you say that?” asked Monty.

“Sunny only gives you work to do around the farm. He does not let you handle the money,” said Ray.

“Yes. He is taking advantage of you,” said Harry, the horse, joining them.

“By the way, what are you doing now? We were planning to get together and gossip. Why don’t you join us too?” said Ray.

Monty hesitated at first, but agreed after Monty and Harry insisted.

“You stay in Sunny’s farm, right?” asked Krokie, the crocodile, who joined them. “Let me be straightforward with you. We don’t like Sunny. He is arrogant and looks down on everyone. He has even insulted us many times,” said Krokie.

“We want to teach him a lesson and we need your help. We have a plan. If we succeed, we can send Sunny to jail and enjoy his wealth,” said Harry.

“I will surely help you! Like you have rightly pointed out, he is indeed taking advantage of me. Tell me what to do?” said Monty.

“Glad to know you are with us!” said Ray.

Krokie then handed a packet to Monty and said, “All you have to do is keep this packet in Sunny’s farm and we will take care of the rest. But make sure Sunny doesn’t see you.” That evening, Monty placed the packet in a tree in Sunny’s farm and informed Ray and the others about it. The following afternoon, Sunny was surprised to see the police at his farm.

“We have received information that you have stolen King Leo’s jewellery. We need to search your farm,” said Inspector Freddy, the fox.

The police found the stolen jewellery in Sunny’s farm. Freddy handcuffed Sunny and took him to the police station. Everyone in the forest was shocked, except Ray, Harry and Krokie who secretly cheered.

That night, the three went over to the farm to celebrate with Monty.

“Monty, you did a great job. As a reward, we want to give you the biggest share in our loot,” said Krokie, opening his bag.

“All the jewellery in this bag has been stolen from different farms in this forest. Let’s divide these among ourselves,” said Harry. “And tomorrow, let’s divide Sunny’s valuables!” he laughed.

Suddenly, the door slammed open, taking them by surprise. Ray, Harry and Krokie were shocked to see Inspector Freddy and Sunny walk in.

“Surprised?” asked Monty smiling. “The moment you revealed to me that you wanted to take revenge on Sunny, I came up with a plan to get you three caught red handed. Inspector Freddy and Sunny were also in on the plan,” explained Monty.

“But you said Sunny was taking advantage of you!” said Ray disbelievingly.

“I lied to you. Sunny has been a true friend to me. He helped me out when I had nothing or knew no one. I would never break my friend’s trust,” said Monty. Sunny hugged Monty and said, “Thank you, Monty! You are indeed a true friend.”