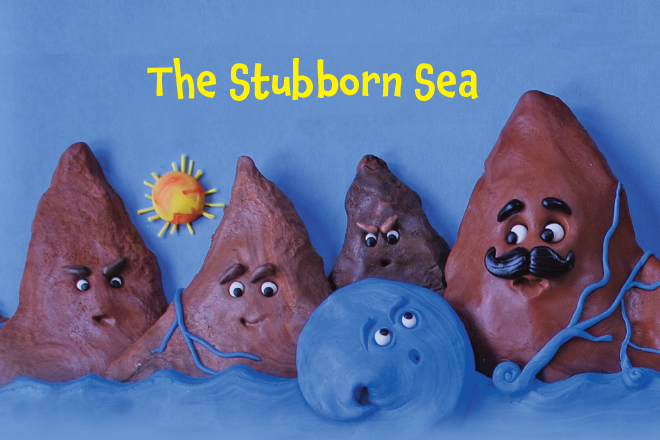 He thought that the dirty rivers were polluting him. He warned the mountains to change the flow of the rivers.

Sumit, the chief of all the mountains explained that the river water was clean. It was necessary for the rivers to flow into the sea, as otherwise the land would get flooded. This, in turn, would make life difficult for the birds, animals and humans. However, Sindhu was stubborn.

Once Sindhu got so angry that he told Sumit, “I am warning you. If all the rivers flowing from the mountains on earth do not change their path, I will swallow all the mountains along with their rivers.”

Sumit did not reply. He remained silent and quietly returned to his abode.

When the other mountains and rivers heard about this incident, they were very disappointed. Everyone knew that Sumit was a peace-loving mountain. He stayed away from fights. The mountains knew that whatever had to be done, would have to be done by the rest of them. They called for a meeting under the leadership of Vindhya, the Mountain of the East.

Some mountains said, “It is necessary to teach the sea a lesson. He has lost his common sense. Many humans live on the banks of our rivers. By refusing to accept the waters of our rivers, the sea is disturbing the fine balance of nature. He spoke rudely to Sumit, a kind-hearted and honourable mountain.”

The leader of the Lahori Mountains, who was also present at the meeting said, “He is proud of his clean and healthy water. Leave it to us to teach him a lesson. We will reduce him to such a state that he will not be able to survive without the help of the rivers.”

The others asked, “What will you do?”

He replied, “Give us your permission to work on a plan. We will find a solution.” Vindhya looked at the other mountains for their approval. They nodded their heads in agreement.

He said, “Alright, all of us agree to your proposal. However, do bear in mind that the balance of nature should not be disturbed.”

The leader of Lahori Mountains replied, “We will keep your words in mind before acting on our plan.”

The next day all the salt mountains proceeded towards the Sea. One of them said, “How could you speak so rudely to the respected mountain? You spoke of swallowing the mountains and the rivers. What do you think of yourself?”

Hearing this, Sindhu became angry and swallowed the entire mountain. Following this, the other mountains also provoked it. Soon, he ate up all the mountains that had come to him. He did not know that these were salt mountains. Meanwhile, the mountains dissolved in the seawater and became a part of it.

A group of herons came to drink seawater. The moment they took in a sip of water, they spat it out. The sea looked at them in confusion.

“Why are you looking at us in surprise? Your water is no longer sweet. No one will want to drink it anymore. You swallowed your brothers and sisters in anger, but did you realise the result of your action?” The cranes said. The sea now realised how foolish he had been. He knew that he had acted carelessly and now he couldn’t undo what he had done.

By then Sumit, Vindhya, Shivalik and several other bigger and smaller mountains had reached the Sea. They saw the Sea hanging its head in shame.

Sumit praised the Lahori Mountains for their sacrifice.

“Now, what is your plan, O Mighty Sea? Will your body become dirty or clean with our rivers flowing into it?” Sumit questioned him.

“Please forgive me. I have made a big mistake and I have paid the price.

My pride has been crushed. I accept the laws of nature. I will no longer try to interfere in nature’s order,” replied the sea.

After that incident, the rivers flowed into the sea happily.