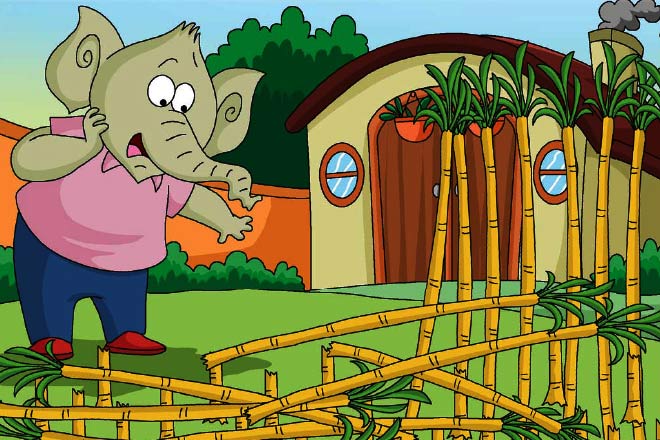 Jumbo elephant loved eating sugarcane. He had planted the sweetest sugarcane plants in his farm and enjoyed sharing sugarcane and its juice with all his neighbours and guests.

One day when Jumbo went to the farm, he was shocked to see sugarcane stalks fallen on the ground. He looked around carefully, but found no sign of anyone entering and walking around the farm.

Next morning, some more of the sugarcane stalks were on the ground. Every night someone entered the farm and broke some of the stalks.

Jumbo started putting a big lock on the door of his farm and the boundary wall around his farm was very high. It was not possible for anyone to jump over and come inside but each morning Jumbo saw that sugarcane stalks were broken.

This troubled Jumbo a lot. On many nights he kept awake and guarded the house, but he did not see anyone going towards his farm. In the morning he found the sugarcane stalks broken and on the ground.

One day, poor Jumbo mentioned this to his friend Jumpy monkey. Jumpy said, “This seems to be the work of a ghost.”

“Why will a ghost break the sugarcane?” Jumbo said, not believing Jumpy. “You have stayed awake the whole night and guarded the stalks. You saw no one come or go, and still the stalks were broken in the morning. This clearly means that it is the work of ghosts, because no one can see them if they do not wish to be seen,” Jumpy continued.

On hearing this, Jumbo got frightened. He started getting afraid to go in the direction of his farm even during the day.

One day Cheeku rabbit came to visit him. Jumbo always offered Cheeku sugarcane juice, but that day he did not do so.

Cheeku found this unusual and asked his friend, “What is the matter Jumbo? You look troubled today. I am also missing the sweet sugarcane juice that you always offer.”

“Why?” asked Cheeku. “You were always so proud of the sugarcane you grew.”

“Ghosts have invaded my sugarcane farm.

Every night they come and break many of my sugarcane stalks. I have stopped going to the farm out of fear,” Jumbo explained to Cheeku.

“Jumbo, you are so intelligent. Why do you still you talk like this? There are no ghosts. They are only exist in our minds and stories,” Cheeku tried to explain.

“If there are no ghosts, then who is breaking my sugarcane?” asked Jumbo.

When Cheeku heard the details, his face became serious. He did not believe in ghosts. “But who is breaking them without being seen?” Cheeku thought to himself and decided to find out.

After thinking for a while Cheeku said, “I am going to spend the night in your farm today and try to find out who breaks the sugarcane.”

“Oh no, I cannot put your life in danger,” said Jumbo who was worried.

Cheeku pleaded to Jumbo and at night he hid behind a tree in the farm. Around midnight, he heard a faint sound. He could not see anyone. Soon, one of the stalks fell. And after some time another one. Cheeku too started feeling afraid. He was sure there were no spirits and ghosts, but something was there. He tiptoed towards the sound. When he reached close to the spot, he heard the sound of someone chewing something.

Then, he noticed Meeku rat chewing at the base of a sugarcane stalk.

“So you are the sugarcane ghost!” said Cheeku angrily.

When Meeku heard Cheeku’s voice, he tried to run away but Cheeku sprang and caught him. He thundered, “Tell me quickly! Why have you been breaking Jumbo’s sugarcane?”

“Very smart. If I leave you, you will run away,” said Cheeku. Then relaxing his hold slightly, Cheeku said, “Come, tell me now. Why are you doing this?”

“I was living here happily with my family. Then one day Jumbo trampled and broke my house with his huge and heavy feet. I have been breaking his sugarcane to take revenge for that,” said Meeku with a long sigh.

“When did I break your house?” asked Jumbo as he reached the scene on hearing the noise.

“You had come here to take sugarcane to give juice to your guests,” said Meeku. He was frightened and sure that Jumbo would trample on him and break his bones.

But instead of being angry, Jumbo said sorrowfully, “My friend, I must have trampled your house by mistake. I am very sorry and beg your pardon.”

“You called me ‘friend’!” said Meeku, surprised. He could not believe that such a huge elephant was asking for forgiveness and not punishing him.

“Yes, we all are friends. We should live together with love and not take revenge on one another,” said Jumbo. Then after thinking for a while he said, “I will make a hole in the soil with my long and strong teeth. You can make your house in the hole and live happily again.”

“Thank you Jumbo but we have already made a new house,” Meeku said.

“Oh it is nice to hear that!” said Jumbo.

“But what I have done was not right. I should be punished for it,” said Meeku. Seeing Jumbo’s nobility, he felt very sorry for his act.

“Yes, you should get the punishment,” Jumbo closed his eyes for a while and then said, “Your punishment is to taste all the plants in this garden and tell me which one is the sweetest.”

Then Jumbo added, “Cheeku has found the sugarcane ghost. I want to reward him with the juice of the sweetest plant.” On hearing this, Meeku went in the farm joyfully. After some time his voice was heard, “Dear Jumbo, this plant is the sweetest.”

Jumbo quickly went and got that stalk. He squeezed the juice and offered it to both his friends. All felt very happy.