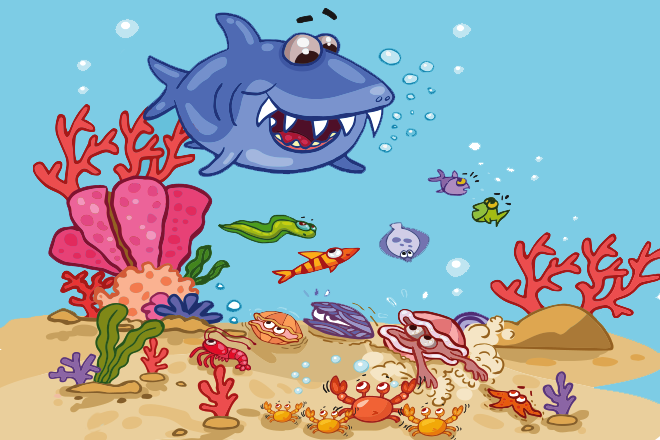 Toothless, the shark was lonely as he had no friends.

“What fun it would be to hang out with the sea horses and flip with the dolphins,” he thought. He daydreamed of chasing ships, watching sunsets and talking to seagulls who always had great stories to share.

It’s not that he hadn’t tried. Once he had attempted to say hello to the clown-fish, who were always clowning around, but as soon as they saw him, they turned all serious and vanished. And the clams…well, they just clammed up, much to his misery.

“How can I make some friends?” Toothless asked his mother. “And why did you name me Toothless when I have a mouth full of teeth? All the fish look confused when I introduce myself.”

“When you were a baby, you didn’t have teeth for a very long time and so the name just stuck,” his mother explained.

Toothless was still sad. Teeth or no teeth, he had no friends.

“The next time you meet someone, why don’t you tell some joke and then introduce yourself?” she suggested.

“Ok, I will try that,” said Toothless swimming away.

Soon, he came across a couple of sea turtles.

“Please don’t eat us,” they said scared, when he cornered them.

“Eat? I’ve already had my lunch,” said Toothless. “Besides, I am a vegetarian. I love sea weed. It’s great for my skin. I eat the occasional fish egg for protein…” his voice trailed off when he realised they were not listening but just trembling with fear.

“Anyway, I came to tell a joke,” he said, flashing his best smile.

“I am here to present you with a joke. Are you ready? Okay. Why is the sea friendly?”

“Because it waves! Get it?” said Toothless amused by his own joke.

“Can we go now, please? Our mother is calling us,” said one of the sea turtles.

“Of course,” said Toothless courteously. He cleared the way and watched them wobble away as his heart sank.

“Sigh… it’s no use,” he later told his baby sister, Finfin. She was the only one who listened to him. They were playing with her coral set again and he was a little bored. How many times could one stack up the corals and giggle when you pushed them with your fin? “It is that human’s fault. The one called Iceberg or something. He made a film about us and made us look scary. It’s as if we eat humans all the time. If some silly human decides to dangle his legs in the ocean, a curious shark may take a nibble. That’s no reason to show us as blood-thirsty monsters. In fact, humans hunt us more than we hunt them. But we don’t scream when we see humans, do we?” said Toothless angrily.

“It’s because you are a predator, son,”said his dad, overhearing him. “It means you eat all types of fish in the ocean. That’s why everyone is scared. You can’t do much to change the food chain. But why don’t you play with your cousins? There are over 300 of them, you know. Isn’t that enough company for you?”

“You just don’t understand. I don’t want to eat fish. I want to make friends with them,” he sighed and swam away sadly.

He swam for a few minutes when he spotted a big boat. There were more and more of them these days. “Oh! That can only mean one thing,” he thought. “A fishing net!”

It was getting harder for everyone to swim in peace—so many cousins and friends were missing. Today he had no time to think about all this. He had to help the fish that were caught in the net.

“Help us! Somebody help us!” cried the fish in different pitches.

He swam up quickly and said, “Don’t worry. I’ll save you!”

But one look at his teeth and all the little fish started squealing louder with terror.

“Alright everybody, I know I have big teeth, but that can’t be helped. You must not let appearances fool you. Just close your eyes and trust me,” he ordered.

The fish closed their eyes and SNAP!

Next moment, the fish were free. Toothless had bit through the net!

Soon, fish across the ocean came to know about the helpful shark who used his teeth to help others in need. Toothless had become a legend, thanks to his big teeth! Toothless soon made lots of friends. And he still loved telling jokes. He told everyone that if he ever met Mr. Iceberg, the film director, he would ask him to make another movie about sharks—starring Toothless as a secret agent. And what would the agent be called? James Pond!

The sea turtles always laughed the hardest at this joke.