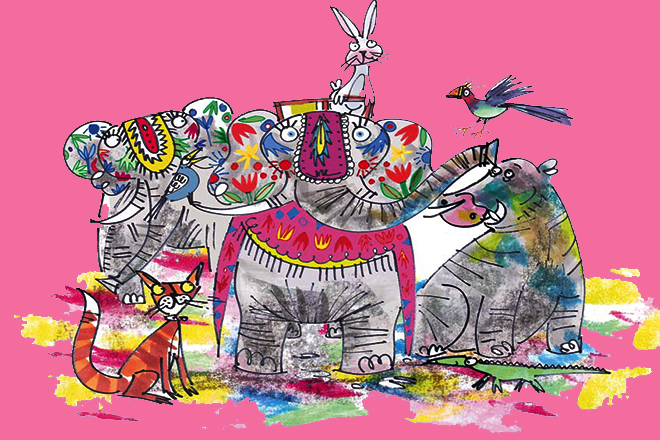 Whitey Rabbit was very proud of his skin. It was as soft as silk and as white as snow. He took good care of it and always tried to keep it clean. He was even more careful now that the festival of Holi was approaching. Whitey Rabbit still shuddered when he recalled the terrible experience he had just the year before.

Whitey Rabbit had been watching his friends playing Holi. They had been throwing colours and water on each other. It was then when Gappu Elephant had suddenly turned around and thrown a bucketful of blackcoloured water on Whitey. Whitey Rabbit had screamed. His delicate, white skin had turned black because of the colour in the water. He had scrubbed himself with soap many times and used countless buckets of water. But the black colour just wouldn’t go. Whitey Rabbit learnt that Gappu Elephant had mixed a dye meant to darken clothes and not a regular Holi colour in the water. It had taken three whole months for the colour to come off. Whitey Rabbit had started dreading Holi after that.

The day before Holi, Whitey Rabbit went up to his friends. “Please don’t think I’m a spoilsport,” he said. “But I won’t be playing Holi with you this year.”

“Don’t you remember what happened last year, Catty?” Whitey Rabbit said with tears in his eyes. “Thanks to Gappu Elephant, I ended up looking like a ghost for three whole months! I had turned as black as coal. Everyone made fun of me for months and called me names!”

“But Gappu Elephant had drenched Bunty Monkey with the same coloured-water too,” Toto Parrot remarked. “And Bunty had managed to look clean in just a day! You mustn’t have used soap or washed yourself properly, Whitey.”

“I had!” Whitey Rabbit said firmly. “I had used several bars of soap and plenty of water too!”

“Bunty Monkey had applied mustard oil on his body before he came out to play!” Meenu Starling explained. “It had formed a coating on his skin. That’s why he could wash the colour off so easily.”

“Whitey, why don’t you apply mustard oil on your body this time?” Toto Parrot suggested. “You will be able to play Holi with us without spoiling your skin.”

“No!” Whitey Rabbit shouted and shuddered. “I will never ever apply mustard oil on my beautiful white skin. It will only make my fur oily and my body stink!”

“Then how will you protect yourself from the colours of Holi, Whitey?” Meenu Starling asked, seeming very concerned. “We all know that Gappu Elephant is hoping to put more coloured water on you this year.’

“I’ll hide somewhere on Holi day and come out only when it’s safe,” Whitey Rabbit said.

“Don’t be silly!” Toto Parrot said. “Gappu Elephant will surely find you. You won’t be able to hide from him for very long.”

Whitey Rabbit shuddered. The thought of his precious skin turning black again scared him to no end.

“Don’t worry, Whitey,” Catty Cat said reassuringly. “You needn’t be afraid of Gappu Elephant or anyone else on Holi day. I have an idea that will surely help.” Happy Hippo was singing Holi songs that were completely out of tune, and some of the animals were dancing too. There was joy and laughter everywhere.

Gappu Elephant was part of the celebrations too. And even though he was enjoying the singing and dancing, his eyes were quietly scanning the forest. He was looking for Whitey Rabbit. And just like the year before, Gappu Elephant had a bucketful of black coloured water ready to pour on him.

When Catty Cat saw Gappu Elephant looking around so carefully, he understood what his intentions were.

Catty Cat slowly sneaked up to where Gappu Elephant was.

“Gappu,” he whispered. “I have brought some special colour for you to put on Whitey. I know how you have been waiting to colour him.”

“I’ll need to use your bucket for that, Gappu,” Catty Cat said, taking Gappu Elephant’s bucket away. He then threw the black-coloured water out and filled it with some tap water. Catty Cat then pulled two bottles out of his pocket. “Here it is, Gappu!” Catty Cat said, pointing to the white solutions in the bottles. He then poured the solutions into the water which turned a dark pink.

“This is a nice dark colour to put on Whitey!” Gappu Elephant said gleefully.

But Gappu Elephant simply laughed and ran away.

Whitey Rabbit found that he had turned a dark pink.

He was coloured right from head to toe. No one else bothered to put any more colour on him after that.

At noon, all the animals went to the lake to wash up. The sun was shining in the sky and the animals’ bodies began drying in the warmth of the sunlight.

Whitey Rabbit found something strange happening to the colour on his body. It was fading away on its own. And by the time he reached the lake, he found that there wasn’t a trace of the dark pink colour left on him.

Gappu Elephant couldn’t believe his eyes when he saw that Whitey Rabbit was his clean, white self already. “How did Whitey clean himself so quickly?” he wondered. “He must have applied some mustard oil before coming out to play.”

Catty Cat whispered to Whitey Rabbit, “That wasn’t any ordinary colour. It was a special colour made of two white solutions. Magicians often use it for their magic shows. It evaporates on its own when it dries!”

Whitey Rabbit smiled and thanked his friend. “That was a wonderful idea you had, Catty!” he said gratefully. “I played Holi without spoiling my skin. Thanks to you. You really are a true friend!”

Catty Cat smiled. Happy Hippo then began singing a song that was completely out of tune again.

All the animals burst out laughing and then went to eat the special Holi feast.