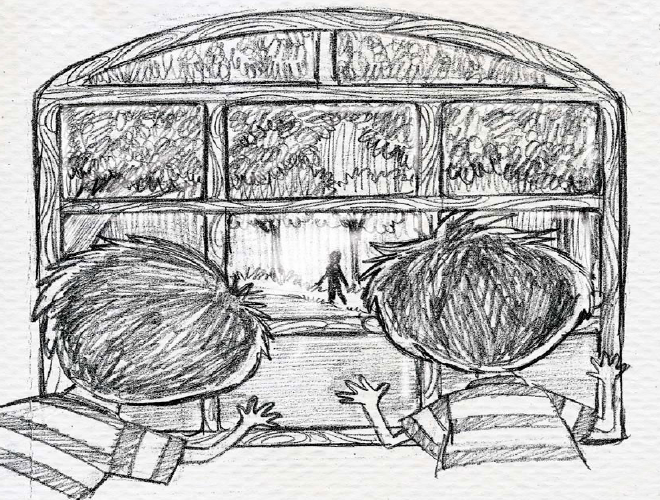 Pack your bags, we’re spending the summer at our farmhouse,” said Dad, as he came home from work. “Are you sure that’s a good idea? Didn’t the new caretaker, Ramu, complain that the farmhouse was haunted?” asked Mom.

“Everybody knows that there are no such things as ghosts,” said Dad

“Did you hear that? The farmhouse might be haunted. This is so exciting!” said Rohit.

The next morning, the family set off towards their farmhouse. When they arrived, Ramu welcomed them.

“How are things, Ramu?” asked Dad.

Ramu’s face fell. “What can I say, Sir? Strange things have been happening here. I keep seeing this mysterious figure every now and then. He has a scary face.”

“I wish I was,” said Ramu. “It is a ghost, Sir. He comes at night, especially when it’s raining heavily. Usually, someone from the market would drop off supplies, but now the villagers are too scared. I have to go get things myself,” said Ramu.

“Those are a nice pair of shoes, Ramu,” said Rohan.

“Thank you. They’re a gift from a friend,” said Ramu and went inside to bring some tea.

“You’re finally here! So good to see you,” shouted a voice from outside the house.

“Kaushik!” exclaimed Dad and introduced him to the rest of the family, “This is Inspector Kaushik. He’s recently been posted here. He’s a childhood friend of mine.”

“What’s this we keep hearing about a ghost, Inspector Kaushik?” asked Rohan.

“Don’t call me Inspector Kaushik, call me Uncle. It’s all a sham,” said Kaushik Uncle. “I’m sure there’s more to this story.”

After dinner, everyone went off to sleep. The twins slept in the same room. A loud thunder woke Rohan with a start. It was still dark outside. As Rohan looked out of the window, lightning flashed and lit everything. There was someone outside in the garden. The next morning, Ramu looked tired as he served everybody breakfast.

“I haven’t slept all night, Sir. It was that ghost. He was wandering in the garden last night. Did you see him?” asked Ramu.

“Neither did we,” said Rohan. Rohit shook his head in agreement.

After breakfast, Ramu took the kids for a walk around the farmhouse.

“Why is that room locked?” asked Rohan, pointing to a shed behind the house.

“That’s just a godown. It’s got a lot of old things inside. It was already locked when I came here.” said Ramu.

“Uh… that’s because the old lock broke. So I changed it,” said Ramu nervously and walked on. As they followed Ramu, they noticed a set of tyre tracks nearby. But they did not ask Ramu anything.

That night, the twins set the alarm for 2 AM. When they woke up, it was raining and outside their window was the same figure. But the figure jumped into the woods and disappeared. The next morning, Ramu was still surprised that nobody had seen the ghost.

After breakfast, the kids went to investigate the tyre tracks outside the godown.

“I think these tracks lead to the forest,” said Rohan. “I wonder who uses it.” Through one of the windows, Rohit peeped inside the godown. The entire godown was a mess and there were several logs of wood inside.

More from Champak: THE GHOST IN THE ROOM

Back at the house, the two brothers had lunch.

“That was a lovely meal. If only there were some cold drinks to wash this down,” said Rohit. “Can you please get us some?”

“I’d love to but the nearest store is at least an hour away,” protested Ramu. “What happened to your boots, Ramu?” asked Rohit.

When Ramu stepped out, the twins got into action. They went straight to his room and began rummaging around for clues. At first, they couldn’t find anything. Finally, Rohan said, “Look what I found under the bed.”

Rohit took a look and said, “This explains everything!”

They found some of Ramu’s clothes hanging in the room and searched the pockets. They found what they were looking for.

“Quickly, let’s get out before he comes back,” said Rohan and they left Ramu’s room.

Ramu came home with cold drinks. While drinking them, Rohit said, “By the way, Ramu, I noticed this morning that one of the godown windows is broken. You should get it fixed.”

“Really? I didn’t notice. You didn’t go near it, did you?” asked Ramu.

No way, even we are scared of the ghost now. In fact, I heard Dad talking about selling the farmhouse.” said Rohit.

Later that evening, the boys were walking through the woods. Every few feet, there were boards that said cutting trees was prohibited.

As they walked along, they heard the sound of wood being chopped. They went closer and saw Ramu talking to a couple of mysterious men, one fat and one thin. They spoke for a while and parted ways. While Ramu walked towards the house, the two men walked the other way. The kids followed them deep into the jungle until they reached a small house. Behind the house was a slope leading into some bushes. They made their way to the back of the house and pressed their ears against the walls. They heard the two men talking, “If Ramu doesn’t do anything soon, we’ll have to intervene,” said one of them.

“You’re right. We cannot afford to delay the shipment any further,” said the other.

Just then, Rohit’s leg slipped and he slid down the slope, into the bushes. Rohan turned to grab his brother, but he was too late. All this commotion alerted the men.

They stepped outside and saw Rohan behind the house and grabbed him. “Put him in the house. We’ll deal with him tomorrow,” said the fat man, and the thin man took Rohan away. Rohit, who had been scratched badly, watched from the bushes.

When the coast was clear, Rohit ran back to the farmhouse. He narrated the whole story to his parents. Inspector Kaushik,

By then, the two men and Rohan had been brought to the farmhouse.

“We had our doubts about you the day you complained of ghosts here,” said Rohan. “We know that you’ve been using this ghost tale to scare us.”

“We grew more suspicious when you told us that the godown had junk inside. If there was just junk inside, why would it need a new lock?” asked Rohit.

“Our suspicions were confirmed when we peeped inside the godown through the broken window. We saw logs of wood,” said Rohan.

“What about the ghost?” asked Mom.

“There’s a ghost alright. We’ve seen it with our own eyes,” said Rohit. “The ghost is none other than Ramu. When we sent him off to bring us some cold drinks, we snooped around in his room and found muddy boots under his bed. They were muddy from walking around in the rain. Along with it was a scary mask. We also found a brand new key in one of his pockets. It turns out that this is the key to the godown,” said Rohan.

I admit it. I’ve been trying to scare you away by pretending to be the ghost. When I first came here, these two men approached me. They told me about their plan and paid me well. We then cooked up this story about the ghost so that you’d sell the house,” said Ramu.

“We also knew that nobody would buy the house because of the ghost. Then we’d be able to buy the house from you. But our plans were foiled,” said Ramu. “Good job, kids!” said Inspector Kaushik and patted them on the back.

“Thank you, Sir,” they said. “Don’t call me Sir, call me Uncle,” he said and everybody laughed.