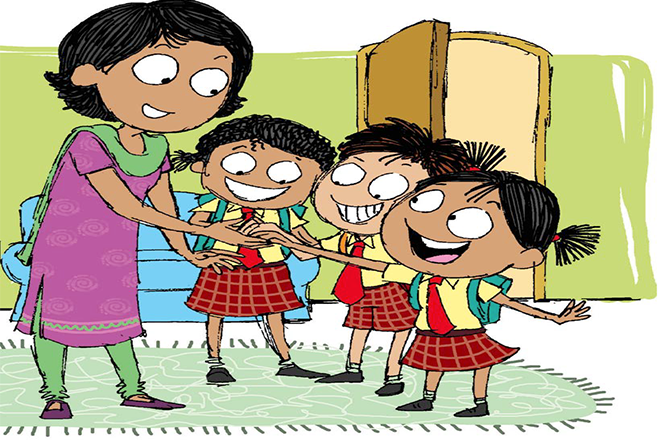 As soon as Rinki, Munni and Raj came back home after their last paper, they all began to celebrate.

“Mummy, you have to promise us that next week, you will take us to grandma’s house for our summer vacations.”

With the kids so excited, she agreed immediately, but made them promise something too.

The children readily accepted and promised to be good.

The week went by in a blink and it was time to spend the summer at granny’s. The kids were so excited that they had finished their packing days in advance. Mummy and the kids went to the railway station and boarded the train to their granny’s village.

When they had settled in to their seats, Raj and Rinky immediately began to think of different ways to trouble granny and tease the other children who lived nearby. Munni tried to make Raj understand that troubling and teasing others is a bad thing. She also reminded him of the promise he had made to their mother. But no one listened.

As the sun began to set, the train began to pull in to the station. Their grandpa and their uncle awaited their arrival. As soon as the train came to a halt, Munni ran up to them and quickly began to ask about granny.

While Raj and Rinky were dreaming of all the fun they were going to have at granny’s expense, Granny had a plan of her own. She had taken the help of all the children in the neighborhood.

When they reached, Munni hugged her granny and aunt. Raj and Rinky on the other hand began to poke fun at granny. She paid no attention to their jabs and told them about the summer competitions.

“This summer, we are going to conduct a competition for all the children in the neighborhood. There will be many events to participate in and the winner will get a cycle. You’re probably very tired right now. I’ll tell you all about it in the morning?” she said.

Raj turned to Rinky and said, “I’m winning that cycle for sure,” and ran outside.

While Raj ran around the neighborhood teasing and making fun of all the children, they all remained quiet as Raj would learn his lesson soon.

Granny addressed the gathering, “The winner of this competition will be decided on the basis of their performance across three events. The first seven children to finish the running race will move on to the painting competition. The children who paint the five best paintings will take part in the general knowledge quiz. The smartest child will be declared the winner. The competition will be held eight days from today, so start practicing. May the best child win.”’

Raj and Rinky were confident that they would win the competition and began training at the playground. All the other children were practicing here as well.

On the eight day, all the children in the neighborhood woke up early and had assembled at the playground for the competition. Because Raj and Rinky always got up late in the morning, they were the last to arrive.

At 8:00 a.m., granny announced that the running race was about to begin. All the children stood in a line and when granny said ‘Go’, they all began to run. Even though he was tired, Raj finished fourth and moved on to the painting competition. Rinky finished eighth and was eliminated.

When the painting competition started at 1 pm, Raj realized that he was completely unprepared. Even though his painting was nothing special, he kept telling all the children that he would surely win. When the results were announced, Raj found out that he had received the least marks. He accused the judges of being partial and ran home.

Munni, on the other hand finished sixth in the running race and was awarded the most marks in the painting competition. She had won the quiz as well. When Munni reached home with her cycle in the evening, Raj had just woken up from a nap.

He became very unhappy when he found out that Munni was awarded the cycle. Granny had a surprise. She took two sets of keys and handed it over to Raj and Rinki. They were the keys of the new cycles. Both hugged her tight and promised to be good.

Soon the summer holidays were over and it was time to go back home.