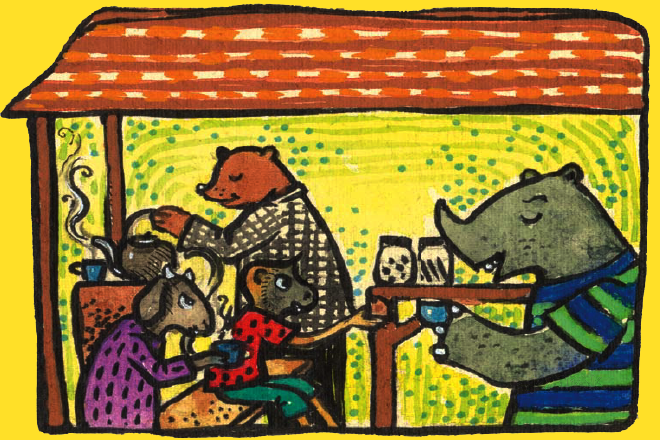 Rio, the rhino had moved to Lush Meadows recently. Because he was from the city, he considered himself to be superior and more intelligent than the animals in the forest.

One day Chimp, the monkey and Giro, the goat were having tea at the tea shop, when Rio stopped by.

“I was the smartest animal in the city. Everyone came to me to ask for solutions for their problems,” boasted Rio.

“That’s good to know. We will also come to you if we have any problem,” said Chimp.

“But why should we?” Giro asked Chimp. “Aren’t we as smart as him?”

“Not at all!” replied Rio. “Animals in this forest are illiterate. You have to go to the city and study in order to become smart.”

We may be less educated, but that doesn’t mean we are fools,” said Chimp and walked away.

As days went by, more and more animals were getting annoyed by Rio’s behaviour. He was rude and haughty.

“Chimp, what does this Rio think of himself? He blows his own trumpet all the time!” said Kira, the cat.

“Yes, I am also fed up of his behaviour,” said Giro.

“I have an idea! If you all cooperate, then we can teach him a lesson,” said Chimp and explained the plan to his friends. Next day, Chimp went to visit Rio at his house. “Rio, you are indeed very smart. You should be the king of this forest. You have all the qualities to be one,” said Chimp.

Rio was beaming with pride.

“But only one thing is missing,” added Chimp.

“What is missing?” asked Rio surprised.

“You look unfit. If only you worked out and became as fit as our King Leo, then no one can stop you from becoming our new king,” said Chimp.

“I think you are right. I need to be fit to become a king. I will start exercising right away,” said Rio eagerly.

Few days later, the doorbell rang at Rio’s house. When he opened the door, he saw Wonky, the donkey with a parcel. He handed it over to Rio and left.

Rio was surprised. He quickly opened the parcel to see a yellow t-shirt and a note inside. It read: “This t-shirt has been manufactured after a lot of research. It has been made with a special type of fabric. The person who wears this and walks for an hour will become fit in two days.” Rio became happy. He did not have to work hard and tire himself out. Just a walk wearing this t-shirt will do, he thought. He immediately wore it and went out for a walk.

He met Giro along the way.

“You look smart in this t-shirt, Rio. Where did you get it from?” enquired Giro.

“Somebody sent it over as a gift. It’s a magical t-shirt,” said Rio proudly.

“Magical? What’s so magical about it?” asked Giro surprised.

“If I wear this and walk for an hour, I will become fit in just two days. If you don’t believe me, come and see me after an hour,” said Rio and continued walking.

He met Chimp and Kira too and he told them the same story.

After an hour, Rio was walking back home when he spotted a crowd gathered near his house.

Hi Rio. We were eager to see how the magical -shirt has changed you, and hence we all came here. But you look just the same,” said Wonky.

“That’s what I felt too. I don’t feel any different as well. I don’t know what went wrong,” said Rio and turned to go inside. “Why are you laughing? It may not have worked today, but it will surely work tomorrow!” said Rio, a little embarrassed.

“Rio, we are laughing because there is something written on the back of your t-shirt. You seem to have missed it in your hurry to wear it,” said Chimp.

“What is written?” asked Chimp.

“This is not a magical t-shirt; it is a regular t-shirt. We planned to make you think about becoming the king and sent over the t-shirt through Wonky. We did all this just to show you that you are not as smart as you think,” explained Chimp.

Rio was ashamed of his behaviour. From then on, he stopped blowing his own trumpet and began respecting the other animals in the forest.