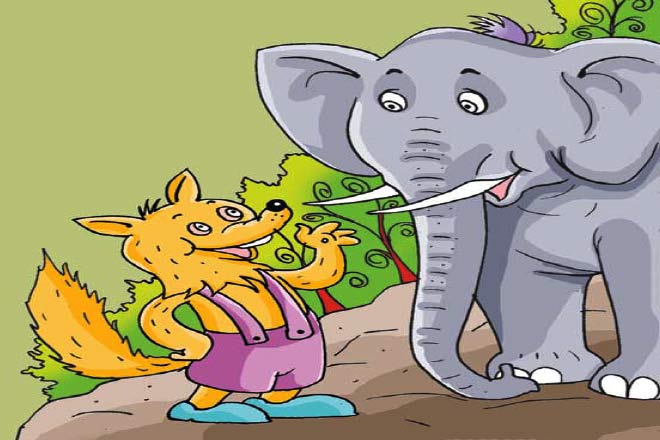 Wily Wolf was a lazy fellow. He didn’t like to work hard and took up small jobs now and then for a living. His meager income was not enough for his family to live on.

Wily Wolf often wondered what he could do to augment his income without having to work too hard.

One day, he saw Jumbo Elephant anxiously searching for something. Wily Wolf noticed that Jumbo Elephant looked very worried and wondered if something valuable was missing.

“What are you searching for, Jumbo?” he asked curiously.

The Road to Change

“Really? You must have thrown it in the dustbin,” Wily Wolf joked and laughed.

But to his surprise, Jumbo Elephant really peeped in the dustbin. And to his great astonishment, the ration card was really there!

“You were absolutely right, Wily!” Jumbo Elephant said, looking quite amazed. “How did you know the ration card was there? Do you have some special powers?”

“Well, I do have magical powers,” Wily Wolf bluffed. “Er…I can see things that lie even in far off places.”

Jumbo Elephant was quite gullible. He believed Wily Wolf’s tale and told his friends and neighbours about it.

Soon, news of Wily Wolf’s magical powers spread all over Champakvan and many animals went to seek his help.

Wily Wolf enjoyed the attention he got. He began to call himself “The Finder of Lost Things”. He realised that this was a great opportunity for him to make easy money.

“Wily, can you tell me where my missing chain is?” Meeku Rabbit requested Wily Wolf. “I haven’t been able to find it.”

“My nutcracker is lost, Wily,” Softy Squirrel said. “Be a dear and tell me where it is. I’ll pay you your fees.”

“Wily! Oh, Wily! Someone has stolen my cash box,” Whitey Cow cried. “All the money I earned by selling my precious milk is in it. Can you help me please?” she begged for she was anxious to recover her stolen cash box.

“Pay me first,” Wily Wolf told the worried animals. Once he had pocketed the money, he told them to go looking for their missing things in places like high mountain tops, muddy pools and dense woods that could not be reached very easily. Unable to locate their small objects in such places, the animals would soon get fed up and abandon their search. And before they could return, Wily Wolf would disappear conveniently.

“Ah! How easy it is to cheat these simple animals!” he would laugh and say. “They are so gullible!”

“Oh no! I’m doomed now!” Wily Wolf said, panicking. “King Sher Singh isn’t someone who will be conned easily. I won’t be able to escape this time.”

More From Champak: Do Good and have Good

“I need your help,” King Sher Singh told Wily Wolf. “Since the past few days, small things like pens and silver spoons and forks have suddenly started disappearing from my palace. And today, the thief has grown bolder. He has stolen my wristwatch and a bunch of keys that I had left on the garden table.”

Wily Wolf nodded respectfully as King Sher Singh went on. He didn’t want him to guess how nervous he was.

King Sher Singh then said, “O Finder of Lost Things, the missing bunch of keys contains the keys to my safe. I am worried that the thief might open my safe and steal some of my priceless treasures. Can you use your powers and tell me where the keys are?”

Wily Wolf didn’t know what to do or say.

“I need some time,” he finally said, hoping to buy some time. “I must go home and chant some hymns before the answer to this great mystery comes to me.”

“All right,” King Sher Singh said. “Take your time. If you do solve the mystery of the missing keys, I’ll confer the title of ‘The Royal Finder of Lost Things’ on you, and also reward you with a gold medal.”

Wily Wolf nodded even though he was terrified. He then returned to his house and worried all along the way. “Oh no,” he said to himself. “How am I going to solve the mystery? I have fooled the simple animals successfully but King Sher Singh won’t fall for my tricks!”

Wily Wolf stayed at home for the rest of the day, wondering what he would do, when he suddenly heard his son Smiley Wolf enter the house. “Waaah!” Smiley Wolf wailed. “My doll is gone! I was playing with it under the tamarind tree when a strange-looking bird swooped down and picked it up with its beak. It then took it to its nest on the tree!”

Smiley Wolf pounded his fists on a table. “Father!” he wept. “I want my doll back from that bird! Waaah!” Wily Wolf’s wife entered the room. “That bird must be the magpie who has built its nest on the tamarind tree. Don’t you know that I never keep small things outside the house? The magpie always carries them away,” she said.

“Is that so?” Wilf Wolf said and jumped up. He rubbed his hands gleefully and said, “I have solved the mystery then! I’ve found King Sher Singh’s thief!” Both Smiley Wolf and Wily Wolf’s wife looked surprised.

“Well, yes!” Wily Wolf said, running out of the house. “Show me where its nest is! I’m sure I’ll find King Sher Singh’s bunch of keys there!” Wily Wolf then told his son and wife that magpies were attracted to shiny objects. “They are known for carrying away small and shiny things from nearby houses. They like to keep them in their nests,” he explained. “I’m sure that the magpie on the tamarind tree has taken King Sher Singh’s bunch of keys too.”

Wily Wolf then quickly climbed up the tree. He peeped into the magpie’s nest and saw that it was full of shiny objects like toys, glass pieces, jewellery, pens, spoons, forks and pins. And yes, there was a bunch of keys there too.

Wily Wolf got down and ran to King Sher Singh’s palace. “King Sher Singh! I have your answer!” he said trying not to sound very excited. “Your keys are in a nest on a tamarind tree not far away from here.” “Is that so?” King Sher Singh asked. He then ordered his servants to find the tamarind tree and bring the nest to him.

The servants did as told and King Sher Singh was shocked when he peeped into the nest. “The bunch of keys is indeed here!” he said, looking very astonished. “Wily Wolf, you really are incredible! And I’m rewarding you, as I promised, with the title of ‘The Royal Finder of Lost Things’. I’m also giving you a gold medal and several thousand rupees!”

Wily Wolf managed to smile even though he was still feeling very nervous. “Thank you,” he said, bowing to King Sher Singh and accepted his rewards.

“I’ve had a stroke of good luck today,” he muttered as he walked home that day. “But I better give up fooling the animals and do some honest work instead. I’d rather work hard than get myself into a situation like this again!”