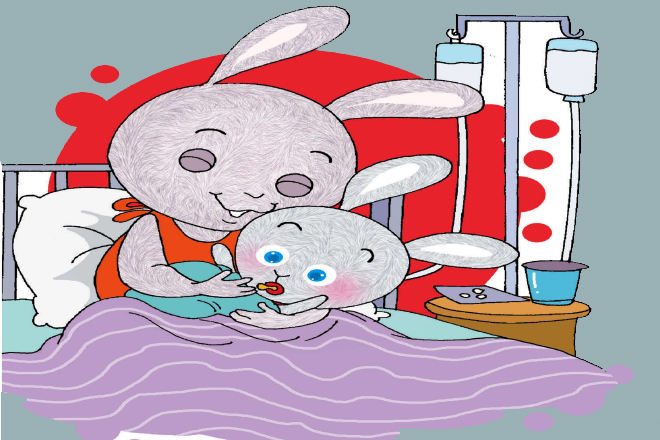 Penny, the rabbit had just given birth to a baby boy. A fluffy ball of fur, with big blue eyes and the rosiest cheeks anybody had ever seen, he was instantly loved by everyone. As soon as he was born, Penny’s husband Donnie received a huge raise at work. Linking the inflow of wealth to the arrival of their new baby, they named him Richie’.

Richie was so cute and so loved that all the neighbourhood kids wanted to play with him. He was also an instant hit at all the places he would visit with his parents. With all the attention he was getting, Richie grew up to be a spoilt little rabbit.

Soon, Richie turned four and started going to the nearby school. Though he was loved by all, they all had only one complaint about him. Whenever he would get angry, Richie would lose control and say mean and hurtful things. His parents tried to explain to him that it’s not nice to be mean to people but nothing changed.

Days passed in a flash and the news he just heard left Richie hopping around in excitement. Richie’s aunt, Aunt Bonnie, who lived abroad was coming to visit next Sunday. He loved her a lot and she loved him very much too. Richie was sure that she’d bring him a lot of gifts and chocolates too.

When Sunday arrived, so did Aunt Bonnie. She came with lots of gifts and even more love for Richie. He was very happy. In the evening, Richie’s friends Yaami, the bulbul, Kaachu, the mouse and Chinki, the sparrow had come over to play. As they were playing together, Chinki damaged Richie’s eraser by mistake. Richie grew furious and shouted at Chinki.

Richie’s parents tried explaining to him that it’s wrong to treat guests this way. But Richie was still upset.

Aunt Bonnie had heard of Richie’s foul temper from his mother. So the next morning, Aunt Bonnie called Richie to her side.

No Fee for This Chore

She had two boxes in her hand. One was beautifully packed with wrapping paper and the other was a plain, uninteresting box. Both contained sweets and she asked him to pick one.

Richie immediately reached for the gift-wrapped box and ate a piece. It tasted bad and he returned the box back to her. When she offered the plain box, he popped a piece in his mouth. It tasted wonderful and he took the box to school, promising that he would share it with his friends.

In the evening, when he returned, Aunt Bonnie asked him which box of chocolates he liked better? He immediately said “The plain one.”

When she asked him why he said it was because it tasted better.

“Do you think other kids would feel the same way too?” she asked.

“Of course, it’s the taste of the chocolate that matters. Not the packaging,” said Richie feeling proud.

More From Champak: It was all in FUN

“Do you know why I made you choose between the two boxes?” asked Aunt Bonnie

“You see Richie, we may be praised for our looks, but if we aren’t nice to others, nobody would want to be our friend. True beauty lies on the inside,” said Aunt Bonnie. Richie understood what she was saying. He felt bad for the all times he hurt someone by saying mean things to them. He apologized to Chinki and to his parents and promised never to be mean to others ever again.