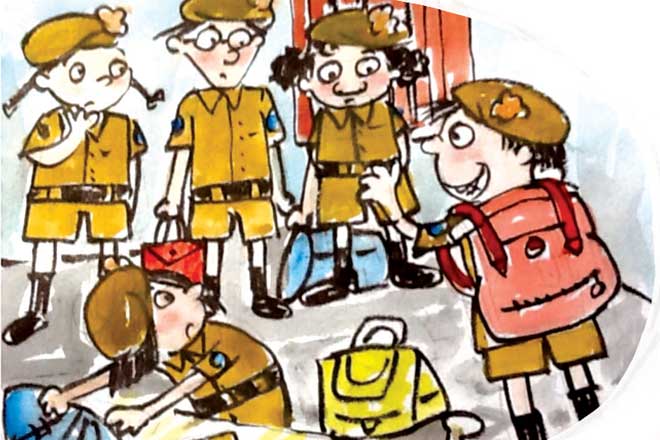 Friends Kiran, Renu, Meera and Naveen were excited. They had all been assigned the same dorm room at the school N.C.C camp organised in a forest area outside the city.

As they were unpacking their bags in the room, they realised that there were five beds. “I wonder who else is sharing the room with us,” said Meera.

Just then, they heard a voice at the door. “Hello, friends! Here I am!” Pranav greeted them with a wide smile.

The four friends were a little shocked. Pranav was infamous at school for being ignorant, yet arrogant. Now, they were stuck with him at camp.

“Oh, really?” said Pranav, dragging his bad inside and unpacking it.

On the first day, Sapan sir, the N.C.C. sergeant ordered all the cadets to pick up the garbage and clean the area around their respective dorms. Everyone started working in their groups, picking up and collecting the garbage in plastic bags. Only Pranav refused to take part in the activity.

Sapan sir noticed that Pranav’s group had not completed the task. He advised all five of them about the rules of the camp and the importance of keeping the surroundings clean. After Sapan sir left, Pranav continued behaving irresponsibly by throwing wrappers and packets of foods outside the dorm room which his friends had just cleaned. The next day there was a heap of garbage right in front of their door as the other cadets also began dumping their garbage there.

That afternoon, before heading to the picnic, Pranav hung his clothes to dry on a wire outside the dorm. Later, at the picnic, Pranav littered all over the place. Renu angrily pointed to a board that read ‘DO NOT LITTER’. But Pranav paid no heed.

When they all returned to the camp later in the evening, Pranav found his clothes among the pile of garbage. The wind had blown his clothes there. He picked up his clothes and suddenly remembered that he had put the keys of his suitcase inside the pocket of his pants. He immediately checked his pants but the keys were not there.

“What shall I do now? The keys may have fallen in the garbage pile,” he thought. “But how will I find the keys in this dirt?” Pranav regretted throwing the garbage near the dorm. He felt like crying. His roommates Kiran, Renu, Meera and Naveen offered to help him look for the keys. Sapan sir came to know about Pranav’s lots keys and said, “Pranav is responsible for the garbage. So Pranav shall do the cleaning and searching.”

Pranav started picking up the garbage carefully as he did not want his keys to get mixed up in the garbage and get lost. Pranav not only had to pick up his own garbage but the garbage that the other cadets had thrown as well. Pranav’s misery upset his roommates.

“Pranav, did you check the pockets of your pants carefully?” asked Kiran.

“Yes, I did! But will you please check it once more?” requested Pranav.

Kiran checked the pockets again. The keys were not to be found. Then he asked,

“Pranav, what else were you wearing this morning?”

“This shirt,” he replied, shaking it.

To his surprise, a bunch of keys fell from his shirt pocket on to the ground with a resounding clunk. “Oh, there are my keys!” Pranav exclaimed in joy. Exhaustion and worry were gone from his face now.

“Thank you, Kiran, for helping find my keys. Not only did I get punished today, I have also learnt my lesson. I will not litter and keep my surrounding clean,” said Pranav, as tears of regret welled up in his eyes.

“Don’t worry, Pranav. We’re happy that you have realised your mistake. Let’s now celebrate with another picnic,” said Naveen, trying to cheer him up.

“And this time, I will carry a bag with me to throw all the waste inside,” said Pranav smiling.