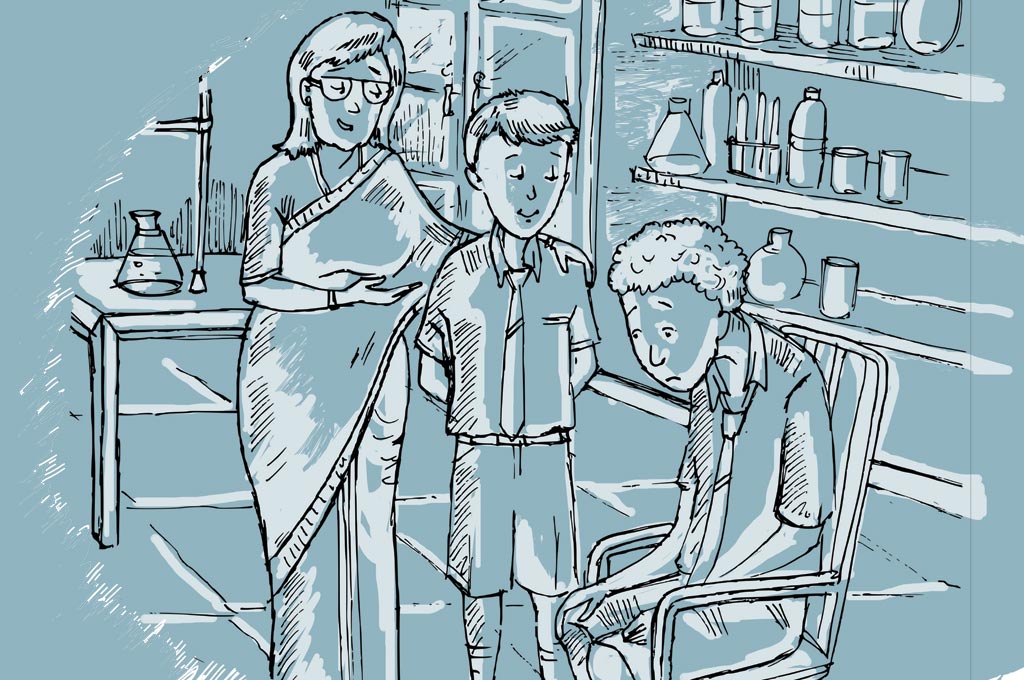 “Children, I have an announcement to make. A new student is joining our class today,” said Neha Ma’am.

A strikingly fair boy walked into the classroom.

“This is Varun,” introduced Neha Ma’am.

Varun smiled shyly. Some students smiled back while others turned their faces away.

“He looks like a ghost! I don’t want to be friends with such a weird-looking person,” said Rahul.

“Me neither,” said Shriya.

Rahul and Shriya avoided Varun. They would have lunch together and play together, but they did not invite Varun to join them. They began to avoid Sandeep as well as he was friends with Varun.

“Because of me, Rahul and Shriya have stopped talking to you,” said Varun sadly.

“So what? You are such a good friend to us. We don’t understand why they don’t speak to you,” replied Sandeep.

Soon, most of the students became friends with Varun. He was friendly, helpful and good at studies too. But Rahul and his friends constantly gave him trouble.

One morning, in class, Shriya saw Varun talking to a classmate. She went to Rahul and said to him, “Now is your chance. Varun is busy talking to Sheetal.”

When Varun got up to go for the assembly, Rahul quietly stuck a label on his back. As Varun walked towards the auditorium, the other students laughed at him. Varun was puzzled.

Sandeep pulled the label off Varun’s back and said, “Rahul stuck this on your back.”

Later that day, Varun and his classmates were in the Chemistry lab. Their teacher, Shilpa Ma’am was demonstrating the reactions caused by combining different liquids.

“Observe what happens when I mix these two liquids,” said Shilpa Ma’am, adding liquid from one test tube to another. “See how its colour changes and its gives off a pungent smell. Now, all of you try this for yourselves using the liquids set on the table before each of you. I will be back in five minutes,” she said and went out of the lab.

Rahul opened the cupboard and took out a beaker with some liquid in it. He poured the liquid into the test tube he had in his hand.

“Rahul, don’t!” Varun tried to stop him. But it was too late.

The smoke from the liquid scared Rahul. He screamed and fainted. The other students gathered around Rahul helplessly. Varun held him up and loosened his shirt.

Shilpa Ma’am rushed into the lab. On seeing Rahul lying unconscious, she sprinkled some water on his face. Rahul slowly woke up.

“Why did you use the liquid that was inside the cupboard? The reaction it caused was too strong. That is what made you faint,” said Shilpa Ma’am.

Rahul apologised to his teacher.

Rahul went up to Varun and said, “Please forgive me. You helped me despite the way I have been treating you. You are a good friend. ” Varun smiled and hugged him.